[NOTE: The method described below should still work, but it’s much easier to just use a Heroku buildpack (see this post for details)]

Since I’m “frugal”, I tend to try to push the free hosting envelope as far as possible. As a result, I have my Redmine deployment on Heroku, my files and attachments on Dropbox and my source on GitHub.

I also like to link to changesets in my projects, which is easy enough to do when you host the source and the Redmine server on the same machine.

Not so easy with Heroku+GitHub …. until now!

By the end of this tutorial, we will have:

In 2012, GitHub announced SVN support, which primarily opened the service up to developers who hadn’t given up the centralized development model.

As an added bonus, it gave us an alternative view into the commit logs for our projects without the need for a local copy.

In order to proceed, I’m making the following assumptions:

Heroku (as of November, 2012 at least) deploys applications to an Ubuntu 10.04 x86_64 environment, and we’re going to be statically linking for that environment, so we need to setup a build system that reflects this requirement.

The most efficient way of doing this is to use Vagrant to initialize a bare-bones Ubuntu Lucid system.

Since Rubygems should already be installed, it can be used to quickly setup Vagrant:

Now, let’s fetch a pre-build lucid system (thanks Vagrant!) and initialize it in the current directory:

This will create a Vagrantfile in the current director, which contains configuration information for our build system. In order to tell Vagrant to use the lucid64 instace we’ve downloaded, the Vagrantfile needs to be edited and the config.vm.box section updated.

Now that everything is ready to go, let’s start the instance.

Once vagrant has started the virtual machine, we can access it via ssh using:

For the purposes of this tutorial, I’m going to be using the 1.6 branch of Subversion, which still had the subversion-deps packaged separately.

NOTE With the 1.7 branch, there is a script that automates the process, and I’ll likely update this tutorial at some point to use this.

First, we need to get the source:

Finally, we’ll configure the build to exclude as much as possible and to produce a static binary:

Once the build completes, the only file we’re interested in is the svn client, so we’ll copy that to the /vagrant directory of our build machine, but first we’ll strip it.

The /vagrant directory is shared between the host and the guest machine by default, so this gives us access to the Subversion client if we open a new console and access the project folder we started Vagrant in.

Since we’re now done, we can end the ssh session and stop the virtual machine

Go to the root of your local Redmine repository, and create a bin folder. Now copy the svn binary to this folder, add the result to your repository and push to Heroku.

If all went well, when you access the Repositories tab under Administration -> Settings, Subversion should be listed and the version we just uploaded displayed.

The final step is to configure an existing project to access a project on GitHub.

First, add a new repository and point it to the GitHub url you would normally use to access the project on the web. 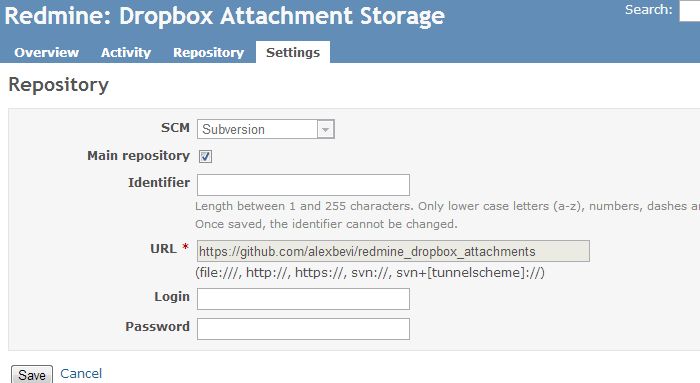 Once configured, clicking on the Repository tab should fetch the changesets and show the source tree

NOTE This can potentially time out on a larger project and require clicking on the Repository tab multiple times until all changesets have been fetched and parsed.

I’ve used my personal installation as an example at http://alexbevi-pm.herokuapp.com/projects/redmine-dropbox-attachments.

This method isn’t on-par with a self-hosted solution, but it’s good enough if you don’t have a VPS in your budget ;)

Subversion + Ruby on Heroku via Buildpacks

Back in 2012, I wrote a post about Redmine and Subversion on Heroku that involved some funky hacks in order to build a working svn binary that could be uploaded as part of your Git payload. This c...

I’d love to say Christmas came early this year, but it looks like sales of Redmine Plugin Extension and Development didn’t quite hit the numbers needed to actually result in a royalty cheque. Ah we...

It’s been over a year since this book was published, and I didn’t think it would see the type of success it has. Based on this last statement, I’m officially eligible to start collecting royalti...