My hope was to get access to the source code for the ScummVM team to be able to incorporate as a custom engine.

Unfortunately (though not unsurprisingly), Blizzard wouldn’t release the code.

Now, once word got out that the complete game had been released (not legally I know …), I had to grab it and give it a shot.

Being a game from the late 90’s, I didn’t expect it to just work. My primary machines run Linux, so I first tried to run this through wine, which didn’t end up working reliably.

I then built a Windows XP VM using VirtualBox. This managed to run the game with no issues.

As per the Gamepedia article:

Basically, after the Dark Portal was destroyed and the rift between the worlds was destroyed, you had a large group of orcs that were trapped on Azeroth. And over the course of the next few years, the humans, being merciful in their ways, instead of hunting down and eradicating these orcs, granted them land areas where they could live as long as they lived within the confines of societal expectations. Basically, they were put on these reservations or camps. And because they were made to live in a way that was very contrary to their basic nature, a lot of the spirit and fire that defines them as a culture was drained out of them. And so what you found yourself with was an orc society in Azeroth of forced passivity, not forced through violence but forced through situation. Although down on their luck, the orcs in Warcraft Adventures were supposed to experience a rebirth, thanks to the leadership of Thrall. 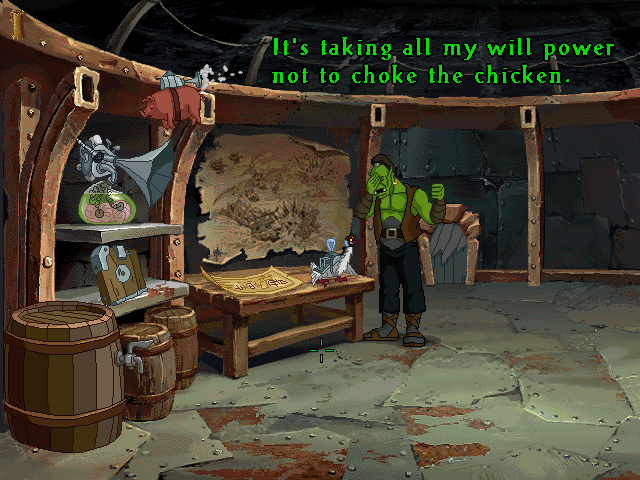 Our storyline followed an orc baby that was taken from a battle scene where his parents were slain and raised by a human lieutenant, Blackmoore, with the intention of raising him with human ideals but being able to use him to control the orcs. Definitely someone who does not fit into the general stereotype of noble humans. He was a self-serving, dark human character who wanted to raise this orc, Thrall, our central character in the game, and use him to control and command the orcs and then raise them as his own private army. Thrall, though he’s raised in captivity by humans to serve their will, still has some fire within him that he can’t deny, so he rebels against his human owners. He escapes the compound where he’s being held, and then over the course of the game, what we do is follow his adventures. As he discovers more about himself and the orcs and what it means to be an orc, so does the player. As you go through the game, you meet some familiar faces from the games, some in retirement, some trying to lead an underground resistance, and you learn of what happened to the Frost Wolf Clan, which was the clan that Thrall’s father Durotan was a part of. You learn that Durotan, Blackhand and Doomhammer were three blood brothers, and that his clan Frost Wolf was sent into the Dwarf Highlands in the mountains. They were exiled there by a plotting Ner’zhul, when he was pulling the strings in the background behind Doom Hammer and Black Hand, because he knew that Durotan was a threat.

When I first started playing WCA, it was a nice trip down memory lane. The gameplay mechanics really seemed to borrow heavily from Full Throttle, which was one of my favourite point-and-click adventures in the ’90s. 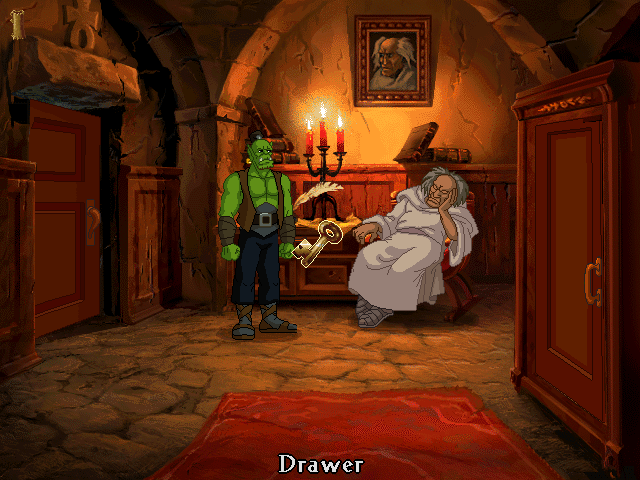 Right-clicking brings up a graphical command menu that lets you talk, look or use.

You can interact with the environment based on designated hotspots (which are identified when hovered by showing a label).

Thrall will usually try to respond with a funny comment whenever possible, which makes it more compelling to click around and see what he has to say about his surroundings.

As with most adventure games of this era, the puzzles are predominantly fetch-quests and inventory manipulation quests. Again, if you grew up with these games this type of mechanic is old hat, but if you’re new to the genre, this can seem a bit tedious.

I found that the puzzles were a bit on the easy side (until the last 10 minutes of the game). This could just be because I’m used to these sorts of games, but until I need to dig around in the dragon’s stomach for the pig’s jetpack, everything was straightforward and I didn’t feel the need to look to Google for the answer.

As a throwback to ’90s point-and-click adventures, I’d say WCA is worth playing. If you enjoyed the genre, this is a no brainer, and if you’ve never played this type of game, this is a pretty easy entry.

The version of the game that was leaked is pretty close to being completed. I didn’t notice any issues or major omissions.

The quality of the FMVs are pretty low compared to other games from the late ’90s. The pacing of the game isn’t too slow and the story is interesting enough to make you want to see it through to the end.

Playing Warcraft Adventures actually made me want to revisit some other adventure games. I get the urge to play through Day of the Tentacle every 4-5 years or so, and I think it’s been almost that long …

This review is part of the “Let’s Adventure!” series. See all reviewed games sorted by rating here. Nightshade, fully titled Nightshade Part 1: The Claws of Sutekh onscreen, is an action-adventure...

This review is part of the “Let’s Adventure!” series. See all reviewed games sorted by rating here. Cruise for a Corpse is designed as a murder investigation. The player assumed the role of Raoul ...