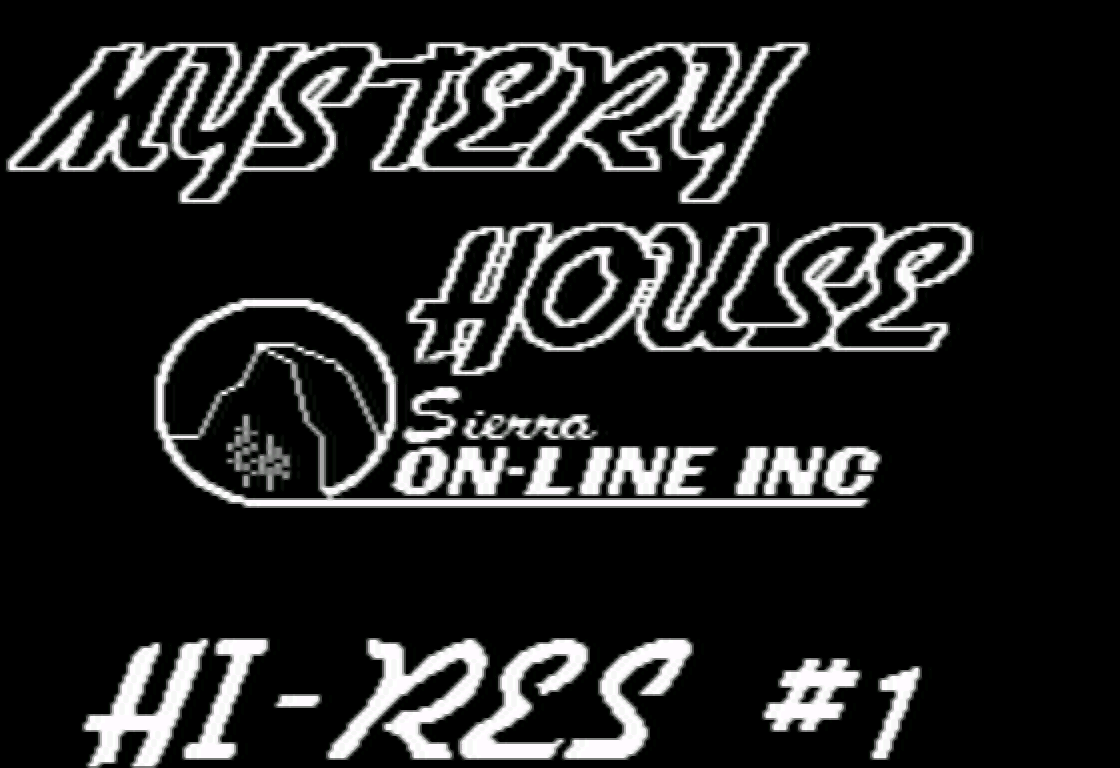 Mystery House is an adventure game released by On-Line Systems in 1980. It was designed, written and illustrated by Roberta Williams, and programmed by Ken Williams for the Apple II. Mystery House is the first graphical adventure game ever and the first game produced by On-Line Systems, the company which would evolve into Sierra On-Line, and is one of the earliest horror video games.

This game holds some fond memories as I do remember playing this with a friend when I was a kid. I didn’t own an Apple II, and didn’t get a 386 until I was about 8 years old so I had to rely on others to play these games. I started out by finding some Apple II disk images and trying to get this running on an emulator, but it turns out the full game can be legally downloaded from the ScummVM Game Downloads page. 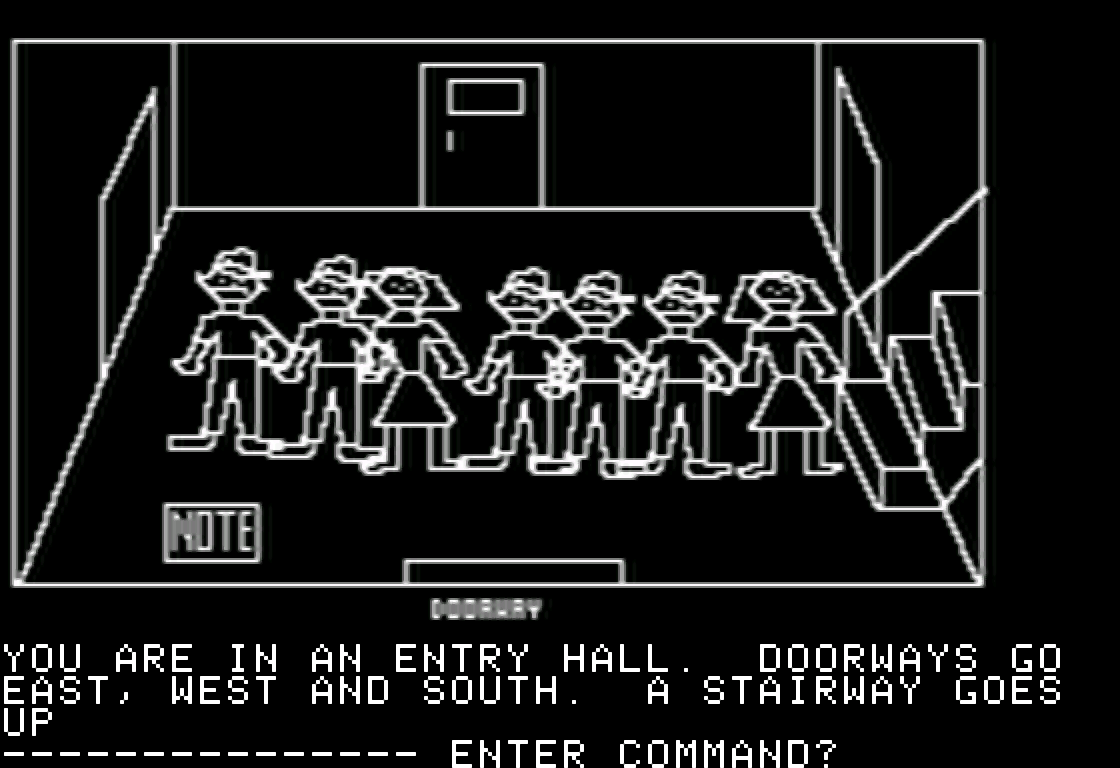 It took a bit of getting used to the text parser interface as it is very unforgiving when you don’t enter the right commands. This is to be expected considering this is one of the oldest adventure games available, but having been spoiled by 30+ years of playing adventure games made getting back into this mindset challenging. Once you reacquaint yourself with the 2 word parser, go UP and OPEN DOOR you’re greeted by all the people who’ve been invited to this mystery house.

There are random notes scattered through the house that indicate there is a murderer amongst the group, as well as a treasure hidden somewhere. Your goal it seems is to survive and escape with said treasure, so into the house you go, collecting items and trying to use them in the correct locations to solve puzzles along the way. 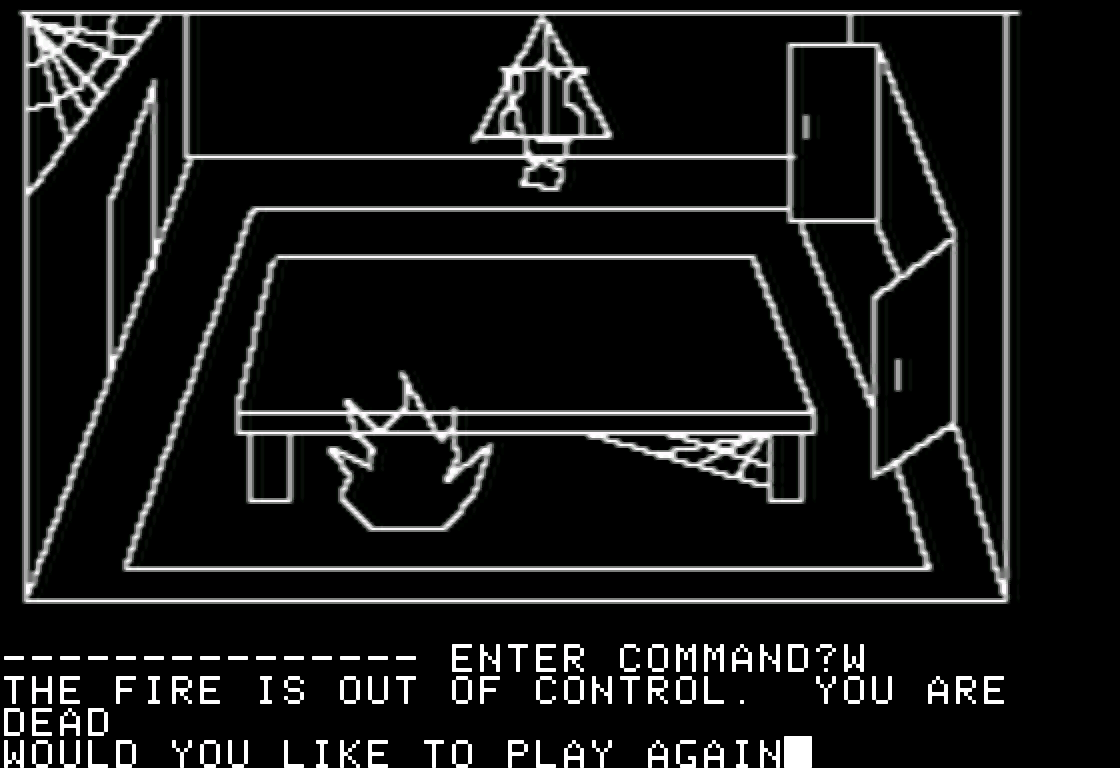 As On-Line Systems would eventually become Sierra On-Line, it’s fitting that one of the recurring tropes of their games would begin here. If you don’t act appropriately, you die :P Unlike the LucasArts games that would come later (and prove to be much more forgiving), Sierra games really pushed you to “Save Early, Save Often” as there were myriad ways to die as you progressed through their stories.

The story here doesn’t really get set up and you’re plopped in front of the house without much to go on. It becomes apparent as you progress what you’re supposed to do, and there aren’t many scenes to explore or items to collect. Though the images are monochromatic and there is no sound, this WAS a graphical adventure game, unlike the interactive fiction games that would come later (such as Zork).

Since this was the first graphical adventure game you can’t really compare it to anything else. Mystery House set the stage for 2 decades of adventure games and the rise of Sierra Online, LucasArts and others who would release some of my personal favourite games of all time. You can breeze through this title pretty quickly and it really has no replayability factor, however if you’re a fan of the genre it’s worth spending some time with the title that started it all. 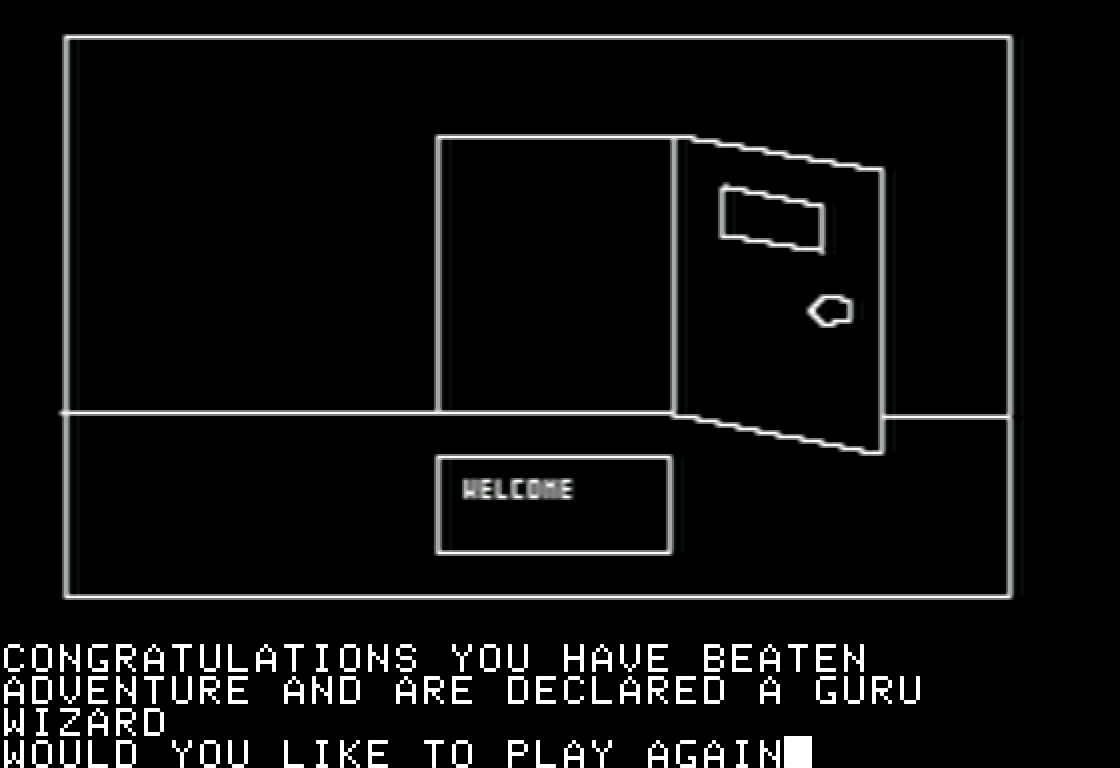