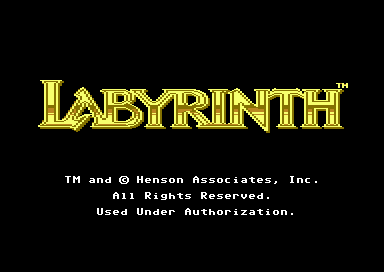 Labyrinth is a 1986 graphic adventure game based on the fantasy film Labyrinth, which tasks you with navigating a maze while solving puzzles and evading dangers. Your goal is to find and defeat the main antagonist, Jareth, within 13 real-time hours.

Though not directly related to the game itself, I just wanted to call out the bygone era of splash screens and crack intros that used to come with pirated software in the 80s and 90s.

The disk image I found for this review had a “Cracked” variation, which on booting up in VICE treated you to the following: 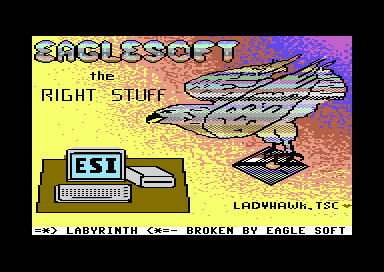 Piracy is still an issue (as it was then), but there is a certain lost art form in these early crack screens that the “youngsters and their torrents” are missing out on.

For some examples, see “The art of the crack” or Jason Scott’s “APPLE II CRACK SCREENS”.

Labyrinth was the first adventure game created by Lucasfilm which, unlike other adventure games of the period, did not feature a command-line interface. Instead, the player uses two scrolling “word wheel” menus on the screen to construct basic sentences. This design clearly inspired the interface used in their next, which you’ve likely heard of (Maniac Mansion), and which we’ll cover in a later review. 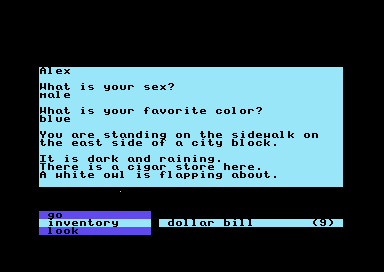 The game opens with you inputting your name, gender and favourite colour. The word wheels are presented on the bottom of the screen and a text interface is shown at the top, and this is your first interaction with the game world … which sucks. I’m not really sure why they decided to do this, but you immediately feel like you’re playing a much older interactive fiction game. Don’t get me wrong, IF games are great but not if you expected a graphical adventure. 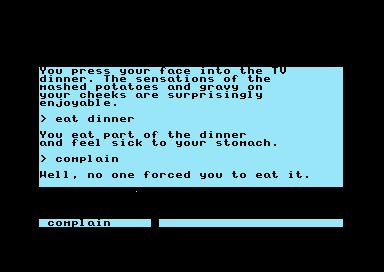 To be fair, this sequence does get you familiarized with the word wheel interface, and also the comedic writing style which will continue throughout the game. As you muddle through you will pick up some items, interact with a couple characters and learn about your inventory. It takes a bit, but eventually you will find your way into the theatre and the movie finally begins. 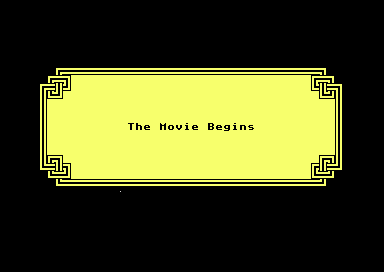 I didn’t really know what to expect from this game as I had done very little research and also hadn’t see the movie it was based on in over 30 years, but holy cow was the quality of the interface and graphics surprising. 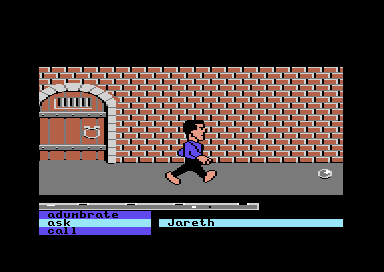 Your character can see exits, objects and NPCs on a “minimap” above the word wheel. The background and characters are very well drawn and occasionally animated. For example, the Stone Faces will follow your character back and forth with their eyes depending on where you move. 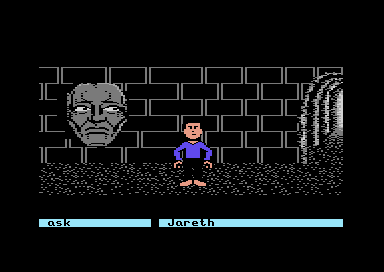 As you move around the labyrinth, you’ll find various items to pick up that need to be used to solve a puzzle or to evade an enemy. Occasionally these puzzles can be intuitive, but I found I had to refer back to the walkthrough for most of my play through. Unlike later LucasArts games, I found Labyrinth to actually be really difficult. This may be due to it being “the first” game they did like this, but also you can miss things and have to backtrack, or make a bigger mistake and actually die and have to load a previous save game. 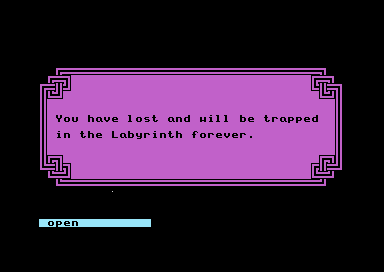 Later LucasArts games removed dead ends and death, but not here. Even with a walkthrough this game was challenging, as there were Goblins that could trap you and send you into a pit you’d have to try to escape from. Whenever this happened, more often than not I had NO idea how to escape, and even reading the solution didn’t always make sense. For example (from the walkthrough):

CALL + NERD. When he/she starts babbling at you, move to the back of the cell and keep moving back and forth until the Nerd “drives you up the wall,” enabling you to climb out! (May not always work.)

Tell me you would have thought of that yourself …

There is intro music when the game starts and sound effects throughout the labyrinth. As you have to avoid the Goblins it’s a nice touch that you can see them approaching on the minimap as well as hear their footsteps as they approach. 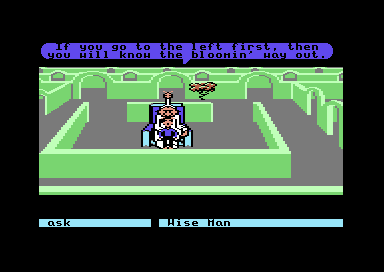 Not all screens are side scrolling as you can move in 4 directions. On some screens you are solving puzzles that involve moving through doors that warp you to another area of the same screen while you try and figure out the correct sequence of doors (ex: The Wise Man’s Garden or The Goblin Village).

The “final battle” in The Upside-Down Room with Jareth is really interesting as it flips the walk surfaces repeatedly. The time limit in this room also drops down to 12 minutes, which creates a sense of urgency as you try and THROW a CRYSTAL BALL at Jareth to win the game. 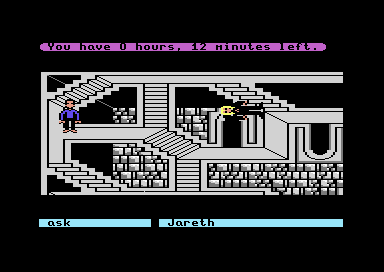 I’m not sure if having watched the movie more recently would have made this game any easier to complete, but I found it to be extremely challenging. Some of the puzzles would have taken many (MANY) more hours of trial and error to complete if I was trying to grind through this without any assistance, however the feedback from the game when you make a mistake keeps you engaged and enjoying the experience.

For LucasArts’s first graphical adventure game they nailed the interface, and set the tone for subsequent games like Maniac Mansion, Monkey Island, Sam and Max and others that share the same light sense of humour and verb-selection interface. 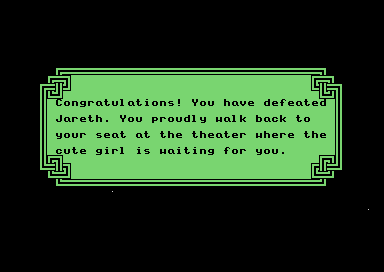 This review is part of the “Let’s Adventure!” series. See all reviewed games sorted by rating here. Sam & Max Hit the Road is a graphic adventure video game released by LucasArts, based on the...