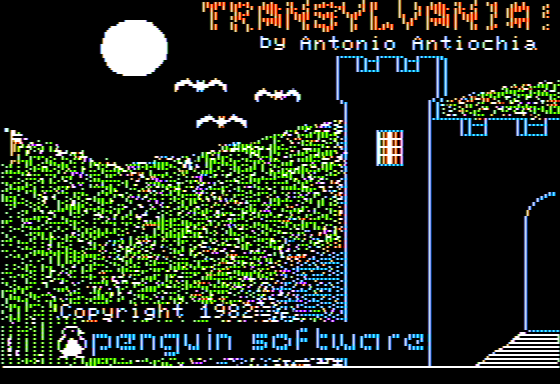 Transylvania is an adventure game from 1982 that follows the player on a quest to rescue Princess Sabrina. Far away a clock strikes 12… 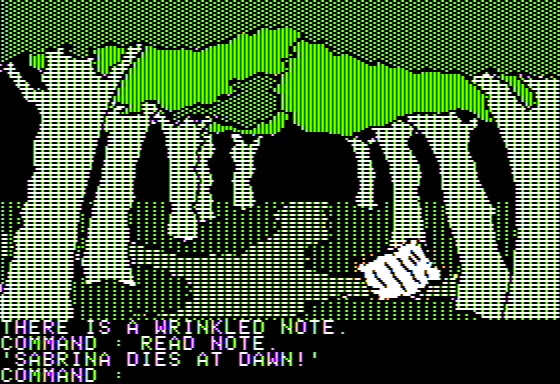 The game comes with a time limit in the form of periodic updates indicating an hour has gone by. The game starts at midnight and if you aren’t finished by 5AM, the princess dies and the game is over.

To interact with the world a basic VERB NOUN text parser is used, which is common for games of this era. Navigation can be done using shortcuts such as N for GO NORTH or U for GO UP, but overall the interface is pretty intuitive. Generally THE EXACT verb/noun combo is needed, and these games are pretty unforgiving if you get it wrong.

As you play through the game you’ll encounter a Werewolf who if you don’t immediately leave the screen will kill you.

You will meet the Werewolf A LOT. 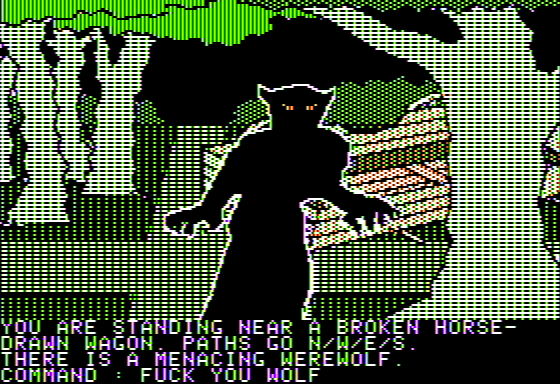 I’m sure you can kill the Werewolf, and according to the walkthrough and Youtube video I watched it’s possible, but only in some versions of the game. The version I played didn’t allow you to GO NORTH at the house to find the cellar, get the crowbar and pry open the coffin. As a result I couldn’t get a bullet for the pistol to SHOOT WOLF.

Oh well, no biggie. Though this game has a fair amount of fetch-quest style puzzles, there’s actually very little you are required to do to complete it.

For example, you can basically just go get the cross, kill the vampire, get the ring, get the cloak, meet the aliens, get the black box, get the key from the goblin, get the elixir, go get Sabrina … and that’s it. 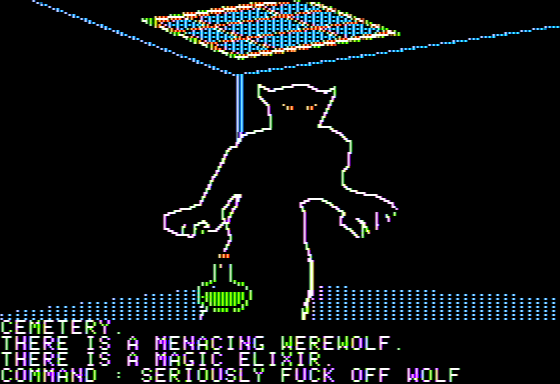 Your inventory space is limited, and once it fills you can’t pick anything else up without dropping an item. Dropping items leaves a visual representation on the screen, so it’s easy to find where you left things.

The puzzles are also intuitive and the clues the game gives you are generally sufficient to progress. I may have missed a clue somewhere but after you get the princess I wouldn’t have thought to go back to the frog and SAIL SHIP to close out the story. Thanks again walkthrough!

Overall this game was an enjoyable adventure, though the story was pretty sparse. I doubt I’d ever replay this, but I had fun while it lasted :P 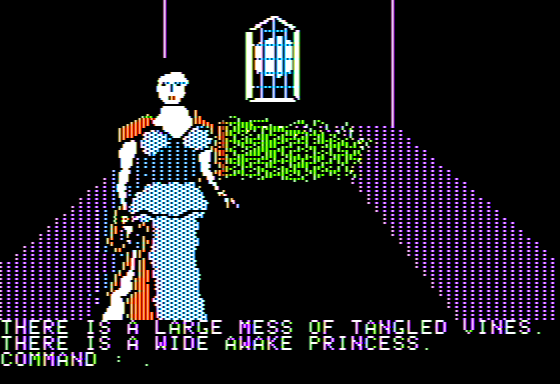