I took a little break from this series to work on other writing projects, but considering ScummVM announced support for this title officially I figured it was time to finally get back in the saddle and run through some adventure games again :)

Sanitarium is a psychological horror point-and-click adventure video game that was originally released for Microsoft Windows. It was developed by DreamForge Intertainment and published by ASC Games in 1998. I have a long history with this game so that’s likely going to influence the rating somewhat, but for anyone that hasn’t played this game before the story is what steals the show. 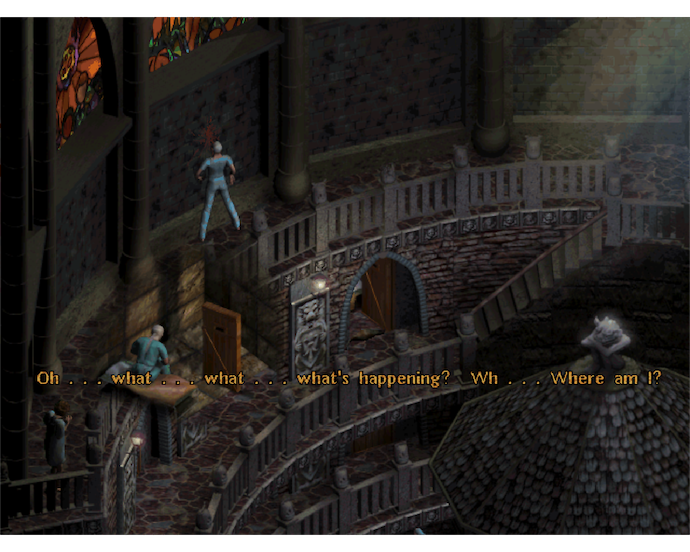 After a car accident knocks him unconscious, a man awakens from a coma, his face fully bandaged, to find that he has been admitted to a dilapidated sanitarium and that he cannot remember who he is or where he came from, or how he came to be there, though his fellow inmates seem to know him simply as “Max”. As he delves deeper into the asylum’s corridors in search of answers, Max finds himself transported to various obscure and otherworldly locations: a small town inhabited only by malformed children and overseen by a malevolent alien entity known only as “Mother”, a demented circus surrounded by an endless ocean and terrorized by a squid-like individual, an alien hive overrun by cyborg insects, and an Aztec village devastated by the return of the god Quetzalcoatl. Between each episode, Max returns to the asylum grounds, blending real and unreal, each time closer to regaining his memory and unraveling the truth surrounding the mysterious Dr. Morgan, head of the asylum. He remembers the death of his younger sister Sarah years ago and the real reason behind his institutionalization. 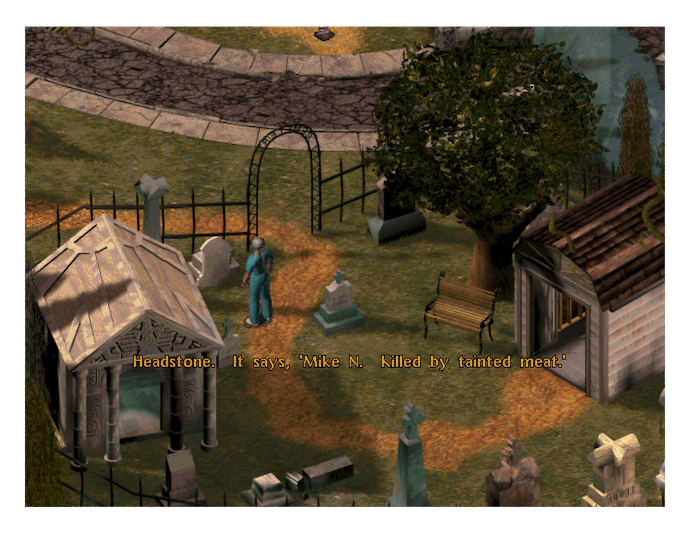 Sanitarium is a point and click adventure that is split into 9 chapters. Chapter progression involves walking around, talking to the characters to uncover more of the story and reading various background pieces such as books, notes, diaries and tombstones. Everything you read further uncovers bits of the story that have been obscured due to the main character’s mental state.

As you move around you’ll find items that can be used to solve various puzzles. These are done in typical fetch-quest style whereby (typically) a character will provider you with a clue as to the location of an item that you then need to go find and bring back in order to progress or to unlock some piece of the chapter. The inventory items are accessed via a ring menu around the character, and all items (aside from one literal “red herring”) are required to complete the game. Items are not carried over from chapter to chapter so everything you find will need to be used within the chapter you found it. 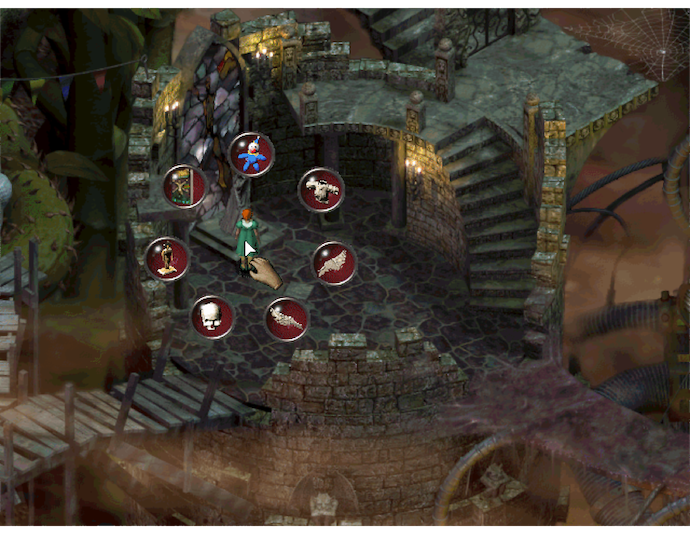 There are multiple puzzles scattered throughout the game. If you pay attention as you play the puzzles aren’t overly difficult as clues to how to solve them are typically found fairly close to each puzzle. Puzzles in the first couple chapters are very straightforward (reattach the cables to a VCR, play tic-tac-toe) however as you approach the end of the game these do get a bit more complex.

Interacting with NPCs is done using a keyword menu. As words are selected the characters fill in more of the story and selected words change colours. Certain keywords aren’t available until after you interact with other characters, complete subquests or find certain items. As a result you have to do some backtracking on occasion to ensure you’re able to advance the story.

Depending on the chapter you’re in the main character (Max) can take the form of a Cyclops, an Aztec god, or his sister Sarah. When you start a chapter as one of these characters you remain as this character for the duration of the chapter. The only variation is in chapter 8 where you can alternate between each character to help solve certain puzzles.

Cinematic cutscenes persist throughout the game to help advance the story. As you slowly uncover who you are, why you were in the asylum to start with and who Dr. Morgan is these videos add additional depth and colour to the story. Once you reach the final chapter you solve a final puzzle to escape from the prison of your mind and awake in a hospital with your family waiting.

It’s been a long time since I actually played through this game, and though I may have fond memories of it due to the time spent trying to reverse engineer the game logic I found I still thoroughly enjoyed playing it again. The dialog and voice acting is a little over the top, but the writing is excellent and there’s a fair amount of comedy sprinkled throughout.

The darker setting and theme resonates with me and for anyone that enjoys a good, solid story I’d highly recommend giving this game a play.