Just Gave Up On - Terranigma

As someone in their thirties with a family, my personal gaming time is somewhat limited. As a result, I need to be a bit more selective with what I choose to sink any free time into; and grinding is not where I want that time to go. I’ll get back to this shortly ;)

I want to start off by saying I really enjoyed Terranigma. It’s a fun 3rd person action-rpg (similar to Link to the Past or Secret of Mana) that concludes the Quintet trilogy started by Soul Blazer and Illusion of Gaia.

I was a big fan of Soul Blazer (less of Illusion of Gaia) so I was really looking forward to Terranigma. The gameplay is similar (real-time battle) and the themes are similar (restoring the world). 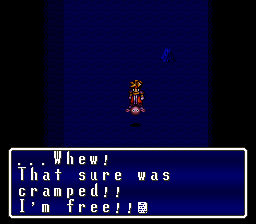 You start off by opening a funky box, which releases Yomi. I don’t really know what he is, but the box he’s in acts as your inventory system, as well as various settings and status pages. This is kind of innovative as it makes interacting with your items, weapons, armour and stats a bit more interesting.

First, you need to save your town, which gets frozen; except for the one guy who conveniently can explain how to unfreeze everyone. 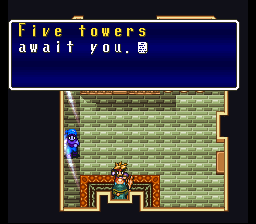 You go off to five different towers in order to “free” some of the villagers (kind of like you do in the dungeons of Soul Blazer …) who can then help you proceed through the remaining towers.

You save the town, say goodbye to your lifelong friend and jump into an abyss that transports you to the Lightside. There you continue resurrecting the world by going through towns and dungeons and killing baddies. Pretty simple … right?

I got stuck twice since I tried doing this without a walkthrough. The first place was Louran, since I forgot to pick up the scarf you needed in order to prove to the dog you knew his owner. I was stuck here for a very, very long time …

Second is Sylvan Castle in Spain. This is where I’ve officially given up. I made it through the castle with no issues, but once you get to the boss, she just decimates you. 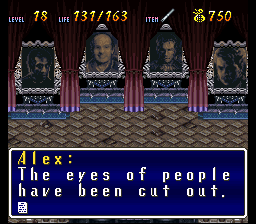 Some walkthroughs say your should be at level 21, some say 25. I’m at level 18. Grinding in this game takes a very long time, and I think I’m just going to cut my losses here and move on.

If this were a turned-based RPG, I could blindly button mash my way up a few levels. Oh well.

From what I played though, Terranigma was a lot of fun. I may come back to this game, but for the moment I’ve decided to move along to the next challenge … Danganronpa. So far … loving it :D :D :D