I had this game finished around Christmas, but I find my motivation for writing these articles is starting to languish. I’m hoping to get that spark back with the next couple of titles i’ll be tackling, even though Shadownrun was one of my favourite SNES games of all time. 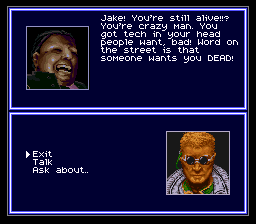 You wake up on a slab in the morgue. You don’t know who you are or how you got there. That’s pretty much all you’ve got to go on when you start this game for the first time.

The intro shows you being gunned down, then a shapeshifter casts a spell on you and takes off. After getting out of the morgue, you run into “Dog”, who appears to be a shamanistic totem.

This was the first 10 minutes of this game, and I remember playing this back in ‘94 and being hooked at this point.

Shadowrun is a cyberpunk action-RPG for the Super Nintendo. You control Jake Armitage, a courier who has something important uploaded to his head computer.

You move around in an isometric fashion. You can interact with certain people by talking to them, or occasionally giving them a key item from your inventory. 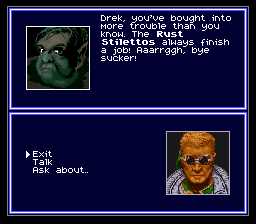 When talking to NPCs, some words will appear in bold. These can then be used as keywords in future conversations. These NPC interactions are how the story is progressed, and you’ll spend a fair amount of time in this menu over the course of the game.

Once you learn the Hiring keyword, you can also try to hire additional shadowrunners. When they join your team, they will fight along side you … for a while. If you’ve increased your leadership levels, they may stay longer.

Leveling up is done by spending karma when you rest on a bed (which also acts as a save point). You can spend your karma to boost various stats, or to level up your spells once you learn magic.

Karma is gained by fighting, which is done by moving a set of cross-hairs across the screen, and when placed over an enemy, mashing the A button. You then fire, wait, fire, wait … etc. 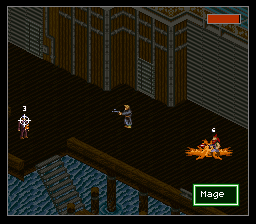 The combat in this game is pretty simple. Just stand in one place and fire. Once you’re in combat mode, you can move your character, so there’s not really any strategy (other than healing on occasion).

The same system is used for spells and items. You select the (spell/item) from the menu, the cursor becomes a hand icon, and you hover over your target and press a button again.

Navigating the screen using the D-pad can be a bit cumbersome; especially when fighting, but you get used to it after a while.

The game seems to be made up of a series of fetch quests that are used to get you from NPC to NPC in order to uncover more keywords, to then be used with other NPCs to trigger more fetch quests. Oh, and move the story along as well ;) 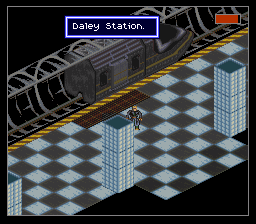 The game is split up into 3 main areas that you can navigate to by train, one area you get to by boat, and the volcano you get to by helicopter. These areas are all opened up as the story moves along and you slowly uncover who was responsible for trying to geek you at the beginning of the game.

As you fight your way through the various areas, you’ll find out that you were a courier with sensitive information in your head computer. You have a datajack in your head which is not working, so you can’t access your brain by computer in order to get this information.

When you go find a street doc to fix your datajack, it triggers a cortex bomb that then needs to be defused. After this is done, you get some information about what’s in your head and you can start decking (hacking) into computers. 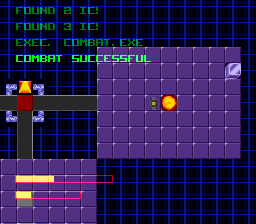 The decking segments are actually pretty dumb, but I love them. This is really what has kept me going back to this game time and again over the years, as I just really loved the concept.

You’re physically wired into this machine, and have to battle various security countermeasures that have been installed in these systems. The battles are done by guessing when there is a hidden enemy on a grid and pressing the A button. Based on an RNG value and your computer skill level, you’ll either miss or destroy the enemy.

That’s it. That’s all there is to it. I still love it though :P

Depending on why you were hacking in, you’ll either trigger an elevator or get part of a data file. The data files are plot devices that give you bits of the story, or contain phone numbers you can use from vidphones throughout the game. 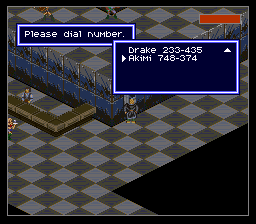 After you’ve finally fought your way through the various sections of the game, you finally get to face off against Drake. He’s apparently the one behind you almost being whacked. You beat him up, head back to Akimi building, fight your way up a handful of floors (fighting and decking) and finally find the AI you need to destroy.

Once done, things explode, and you can close the books on this adventure.

The game alludes to there being a potential sequel in the works, but this never materialized. There was another Shadownrun title for Sega Genesis, but this was a completely different game. I might play through this and do a write up one day, but I’ve tried playing it a couple times over the years and could never get into it (if you think I should, or want to share an opinion, there is a comments section below … :P). 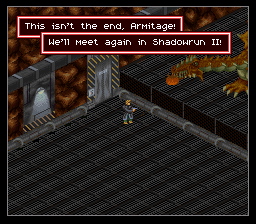 Overall I still love this game. This is where I was introduced to cyberpunk as a kid, and I even went as far as getting the Shadowrun books (Never Deal with a Dragon) that this game was very loosely based on.

The music was also a fantastic complement to the dark atmosphere of the game. 3AM On A Summer Night might actually be one of my favourite tracks from the 16-bit era that wasn’t composed by Nobuo Uematsu ;)

If you’re revisiting the SNES and looking for something you may have overlooked during the mid ’90s, pick this up and give it a spin.

Next up, Seiken Densetsu 3. This one will probably take me a while to complete, then a longer while to actually do a write up on.

Recovering a WiredTiger collection from a corrupt MongoDB installation