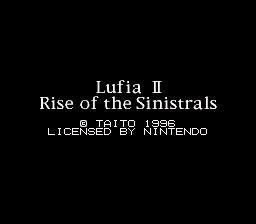 This review has been a long time coming; a VERY long time coming. I heard about Lufia 2: Rise of the Sinistrals when I was still in high school, and have been meaning to play it ever since.

Back then, I was just starting to get into JRPGs (though I probably just thought they were RPGs at the time) and was completely infatuated with anything that Square or Enix could crank out (except for Earthbound, which is still one of my all-time faves).

In the decade(s) since my teens, I’ve picked up Lufia 2 a good dozen times, but have never really given it a fair shake. This time around though, since I’m doing this “Just Finished” series, I thought I’d finally sit down and do a full playthrough.

For anyone that has not played this game: PLAY IT! Lufia 2 is now in the top 10 of my favourite 16-bit JRPGs of all time. Hopefully after reading my synopsis here, anyone that was on the fence will also take the plunge (you’ll thank me later!).

Lufia 2 (aka. Estpolis Denki II, aka. エストポリス伝記II) is a hybrid of traditional JRPG and Action RPG. You control one to four characters at a time throughout the adventure, with enemy encounters being handled via fade-away to a turn-based combat system.

It turns out you (Maxim) are destined to fight the Sinistrals, so you embark on a journey to save the world. Cliché? Yup :P

Don’t get me wrong, I love a good “destined to save the world” story, but after playing a handful of JRPGs in succession, I was getting a bit numb to the same story over and over again.

I decided to give this a fair chance though, and went along with it. I had never played the original Lufia for more than 5-10 minutes, but I do remember the intro segment where you have the four heroes already in the Fortress of Doom getting ready to fight the Sinistrals.

I’m going to skip around a bit here because I just want to cover one thing, which is the end of the game … first. The final battle with Daos for Maxim, Artea, Guy and Selan is the EXACT scene from the first game. This made me REALLY want to go back and play the first game, as I now had a connection with the characters.

Also, I thought I was a really cool transition as it tied the two games together seamlessly. 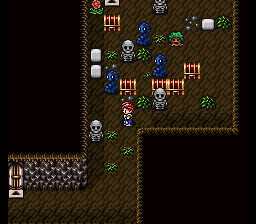 Enemy encounters on the overworld are random. As you’re walking around, suddenly the screen will zoom in and boom, it’s go time! For anyone familiar with JRPGs, this is pretty common.

Unlike traditional RPGs, Lufia 2 doesn’t have “random” encounters in dungeons. All enemies are visible as you explore the dungeons, and though most will chase you, a lot of these battles can be avoided if you so choose. 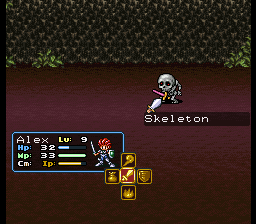 Once a battle is initiated, as opposed to a text-based menu of Fight | Magic | Item | Run as you might see in some games, you’re presented with an icon cross (reminiscent of Breath of Fire).

Aside from the standard Attack, Item and Magic options, there is also and Abilities option for each party member. This additional entry gives each character access to various offensive or defensive abilities that are linked to their weapons and armour. This adds another dimension to battles as you have to keep track of what skills are linked to your equipment (don’t just hit ‘optimize’ each time) as weaker items may provide added benefits against certain enemies. 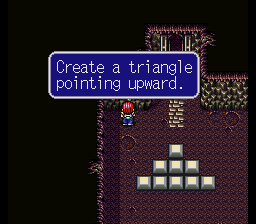 What I really enjoyed about this game from the moment I entered the first dungeon was the puzzles. Littered throughout each dungeon are puzzles that you need to solve in order to open a door and proceed.

Generally, these puzzles aren’t all that complex, but they break up the dungeons a bit so it doesn’t feel monotonous as you basically do the same things over and over in order to progress the story.

As you move further through the game, you also collect various key items, that can be used in order to help solve the various puzzles (bombs, arrows, hook shot, etc.) 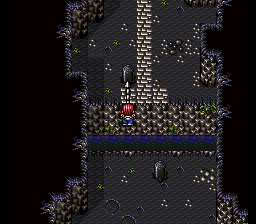 These add another dimension to the puzzles that keeps them interesting. I honestly didn’t find most puzzles to be very challenging, but I will admit to having to use a walkthrough for at least 2 of them … (thankfully there are excellent guides on rpgclassics for just these instances where you need a tiny bit of help)

Your party is made up of Maxim, and at various points Tia, Guy, Selan, Dekar and Arty. 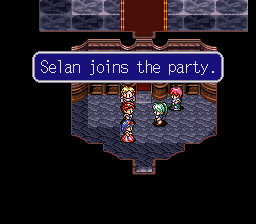 Tia is from your home village and follows you on the initial leg of the quest. You think she’s going to end up being Maxim’s love interest, but that changes once Selan enters the story ;)

Maxim and Selan fall in love, get married, and have a baby. This all happens around the mid-point of the game, acting as a bit of an intermission. Once they have the kid, they decide to go back out and fight so that the world is safe for their baby (and everyone else … I guess). 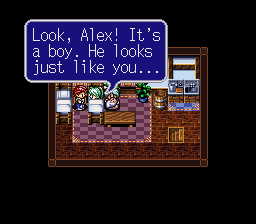 Guy joins as he’s a good fighter and wants to help defeat the Sinistrals. Dekar’s reasons are basically the same.

Your party can also include capsule monsters. These are optional encounters throughout the game that if you seek out result in an additional character being able to join you in battle. 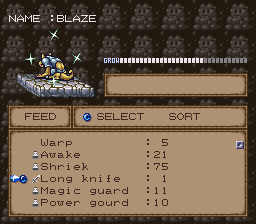 Each monster has an elemental affiliation, and can level up with you as you fight enemies. If the capsule monster dies in battle though, they respawn for the next fight, so there’s no need to worry about their health (you can’t heal them). They do tend to run from a lot of battles automatically though, which can be annoying.

Capsule monsters can also be made stronger by leveling them up through feeding them weapons, armour and items.

This got a bit annoying as I had to hear a lot of “Yuk”s from the monsters while trying to find the right items to feed them.

I just quickly wanted to touch on the music in this game. For a JRPG not composed by Nobuo, the soundtrack is pretty solid.

If you’ve got a minute, check out a couple of songs below to get a taste of what’s in store for you ;)

This is a completely optional dungeon, but if you’re going to play Lufia 2, you HAVE to try and clear it ;)

The ancient cave is 99 randomly generated floors, and you start the cave at level 1 (no matter where you actually are in the game). As you level up and descend further into the cave, you find various treasures and spells that you can only use within the cave.

If you warp out, you lose all experience and items you’ve found; aside from items in blue chests (which are few).

Once you make it to the last level of the cave, you fight the Master Jelly. This is a brutal fight, as you only have 3 turns in order to beat him, and if you don’t, he just runs and that’s the end of it (you have to warp out).

Note that I basically cheated to beat him. If you can kill your entire party before he runs, you’ll actually win the fight.

I did this, but I didn’t find all the Iris Treasures in the cave so it didn’t really matter.

As great as you probably think I think this game is by now, it is not without its faults.

First off, this game is extremely linear. The plot progresses as follows:

Sure you get a boat at a certain point and it “opens” up the map, but you still basically go from town to town and tower to tower without much variety.

Also, it may be that I’m just a bit more experienced in the genre and know how to level grind, but I found this game to be very, very easy. By the final dungeon, every battle was essentially the same (the final boss included): fight, fight, valor, fight.

All in all though, I really enjoyed this game. Although the story seemed like it was going to be pretty basic at the outset turned out the be really compelling.

There was actually quite a bit of character development. I think this is why at the end when you realize you’re basically setting up the intro of Lufia I, you really want to go back and play that game to see if the story continues to be as strong.

I’ll probably give this game another run through in a few years, as it really was enjoyable. I tend to do this with RPGs i enjoy as I forget specifics of the story over the years and enjoy rediscovering them. Final Fantasy IV and VI have had this treatment now probably a good 4-5 times each ;)