Originally released for the Super Nintendo Entertainment System in 1994, BoF2 is the direct sequel to the original. Although the protagonist is named the same (Ryu) as in the original, I don’t think he’s supposed to be the same person (the story takes place hundreds of years after the original). 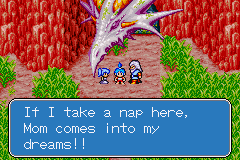 You start off as a kid in a small town with your buddy Bow. You go visit the outskirts of town where there is a dragon sleeping and blocking a gate. You’re attacked by a demon named Barubary, who knocks the two out then disappears.

The story picks up 10 years later with the two trying to make it as rangers and taking odd jobs. You take a job trying to find someone’s lost pet, and from there, the game begins.

You save the pet (pig) in an old house where a hermit lives. This house introduces an interesting dynamic to the game as this becomes the location known as TownShip. As you make your may through the game, various people join your town or can be hired to improve it. 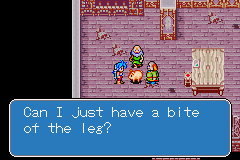 You can recruit builders, weapon/item shop keepers and magicians that teach you new skills and abilities. Also as your party grows, they can be stashed here in a big house and you can go talk to them at any point to get clues as to what needs to be done next.

The battle system is the same as the original, and most JRPGs of the era; enemies to the left, characters to the right. A menu system controls your actions, which should all be well known by now (Attack, Defend, Magic, Item, Run). 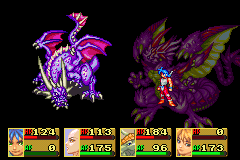 As you progress, you will learn that Ryu is a member of the Dragon Clan (as was the case in the original BoF as well), and can learn to summon various dragons.

In BoF2, you don’t need to venture too far off track in order to get the dragons. You actually get the majority of them in groups of three, which is convenient.

You meet a whole cast of characters that can join your party along the way, and each one has a special overworld ability that helps you progress the story.

For example, Sten can reach across some cliffs to grab a pole and drag the party across, Katt can smash rocks to open up pathways, Rand can roll into a ball and get you across vast stretches of the overworld without being attacked.

This last one is convenient as the random enemy encounter rate is pretty high in this game. I’m really thankful I was playing this on an emulator that supported fast-forwarding, as the majority of the battles I just auto-fought at 800x speed ;) 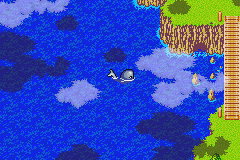 There are also multiple ways to get around the world. You can walk, ride on a whale, ride on a giant bird, or fly TownShip around. This last one, I didn’t actually get to do as I killed the old guy hooked up to the machine on one of the quests :(.

While playing, depending on the decisions you make, you can affect the type of ending you’ll get. Like some other RPGs (ex. Chrono Trigger), there are multiple endings you can get. 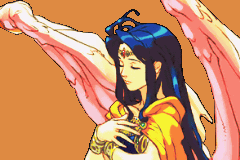 BoF2 has a lot more “cut scenes” than the original did. I’m not sure if this was the case on the SNES version, but as I was playing the GBA remake, this stood out for me.

The cut-scenes are just still images, but they do provide a nice break from the gameplay and tend to actually contribute to the story at hand (as opposed to just being randomly inserted).

The underlying story of the game is about a religious cult (St. Eva) that is sending souls to the ultimate evil. Once you infiltrate the cult and discover this plot, you can go to the underworld to fight Detheven, but first you have to beat the demon from the beginning of the game: Barubary. 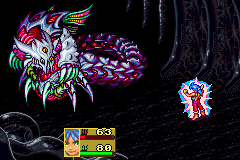 You can choose to fight Barubary alone, or as a group. I believe the choice you make here influences the ending you get, but I’m not positive …

I went it alone, and found it to be a very long, difficult fight. You basically have to attack once, heal once, repeat.

When I’d knocked off about 3000 points of damage, I finally summoned a dragon to finish him off. This was the recommended strategy as the first few times I fought I used my dragon right away and had my ass kicked shortly thereafter. This walkthrough really helped ;)

The final battle with Detheven didn’t prove to be all that difficult, and once you defeat him and the credits roll, Ryu chooses to take the form of a dragon and sacrifice himself to seal off the doorway to the underworld.

I quite enjoyed this game, though I did find the battle system to be excruciatingly slow. Without fast-forward on, I doubt I would have finished this game. Also, after a battle completes there is a delay before you can move your characters again, which also made the game feel sluggish.

Overall though, I would recommend this to any JRPG fan as the story is solid, the gameplay is fun, and if you like, you can take a break from the action and go fishing for treasure.

As usual, here’s the gallery of screenshots. Let me know which one’s your favourite in the comments below ;)

For my next playthrough, I’m working on Final Fantasy II: Dawn of Souls. Shouldn’t be too much longer now, as I’m already at the Jade Passage, which I believe is the final section of the game.

Did you like Breath of Fire II? Which is your favourite of the series? What should I play next? Is my writing getting any better? Let me know in the comments below if you have any feedback.