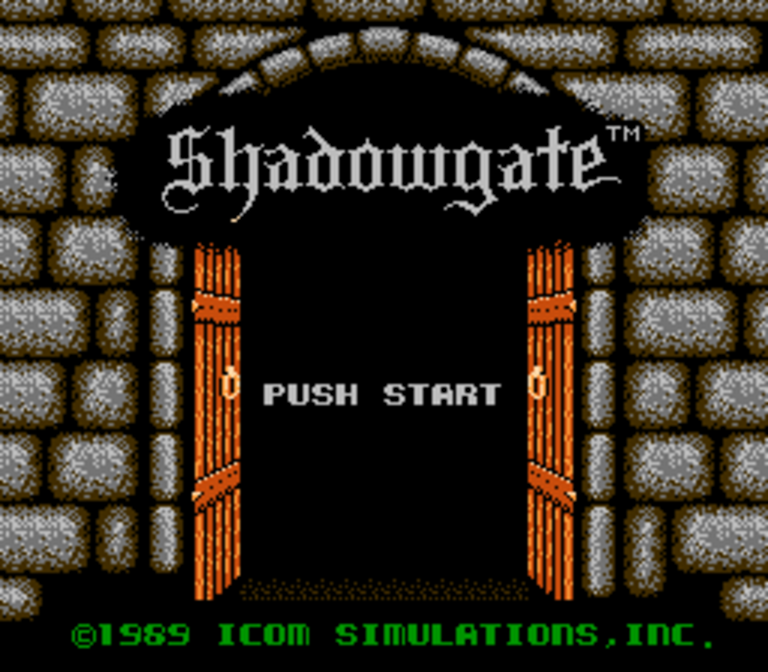 Shadowgate is a black-and-white 1987 point-and-click adventure video game originally for the Apple Macintosh in the MacVenture series. The game is named for its setting, Castle Shadowgate, residence of the evil Warlock Lord. The player, as the “last of a great line of hero-kings” is charged with the task of saving the world by defeating the Warlock Lord, who is attempting to summon up the demon Behemoth out of Hell. 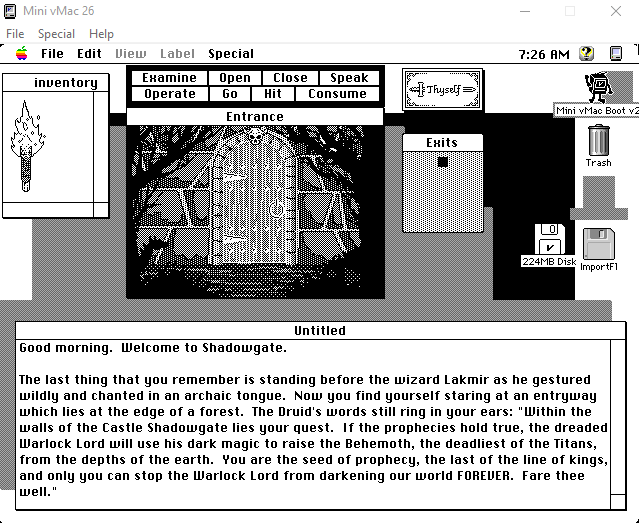 Since part of the fun of this series is trying to get these games to run on the original systems, I setup Mini vMac and found a StuffIt archive of Shadowgate. Since StuffIt is a proprietary format you have to then find a copy of StuffIt Expander that would work on the MacOS version in use (System 7.5.5 in this case), figure out how to get it into the emulated environment, install it, then expand the archive.

As much fun as it was getting the MacOS environment up and running, since Shadowgate was also released for the NES I decided to play through that version instead. 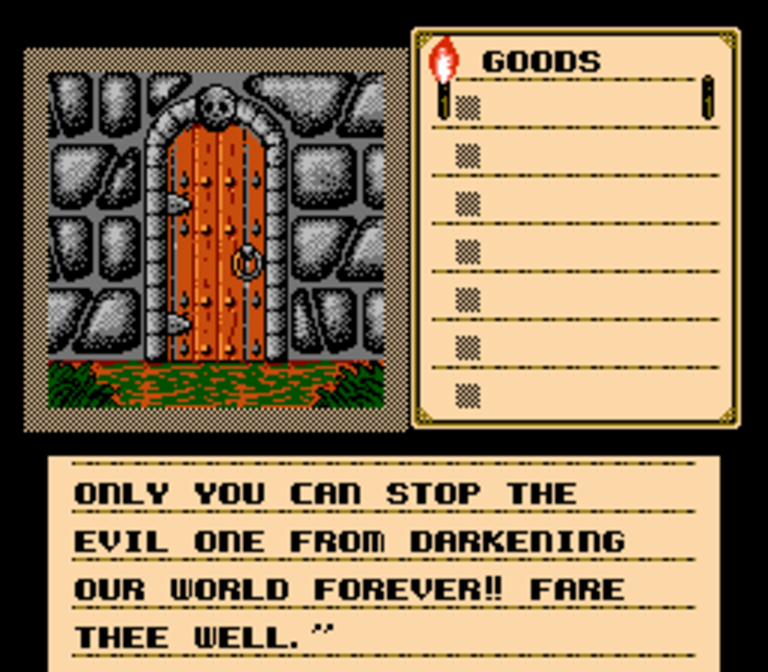 The NES release of Shadowgate is the only one to have music. I still remember the Entryway music as being my favourite track, and was not disappointed hearing this looping in the background during this play through.

The game is split into three “views”. There is a game view that shows the entirety of the current room, and inventory view and an action view. These views are interacted with using a cursor. The action view contains verbs that when selected allow you to either apply an action to the game view or inventory view. For example, you can OPEN a door you see in the game view, or MOVE to a marked exit. 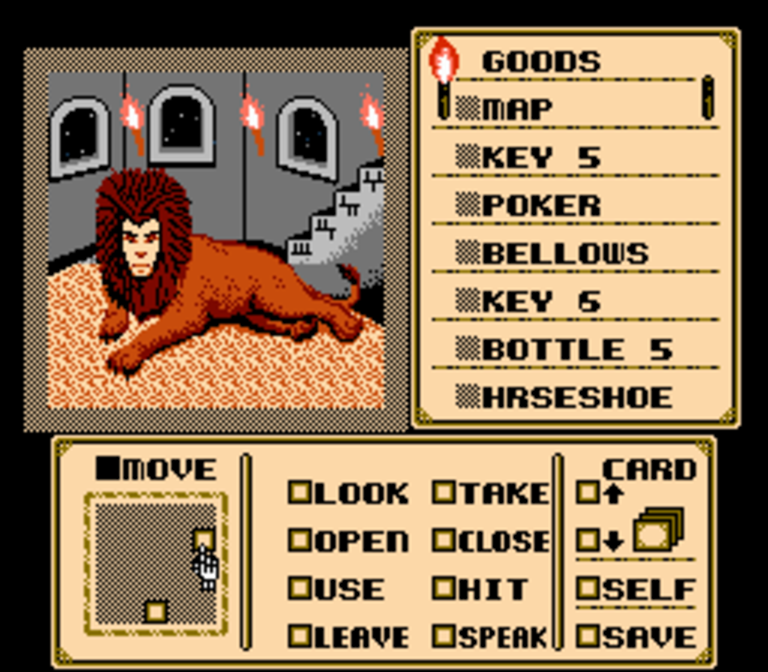 Every new room of the castle you investigate offers new puzzles, most having a “wrong choice” that will result in you dying and having to reload a previous save. As a result, “Save Early, Save Often” as it’s not always obvious what a wrong choice may look like. For example, opening the wrong crypt will spill corrosive ooze that won’t kill you unless you try to exit through the wrong door. 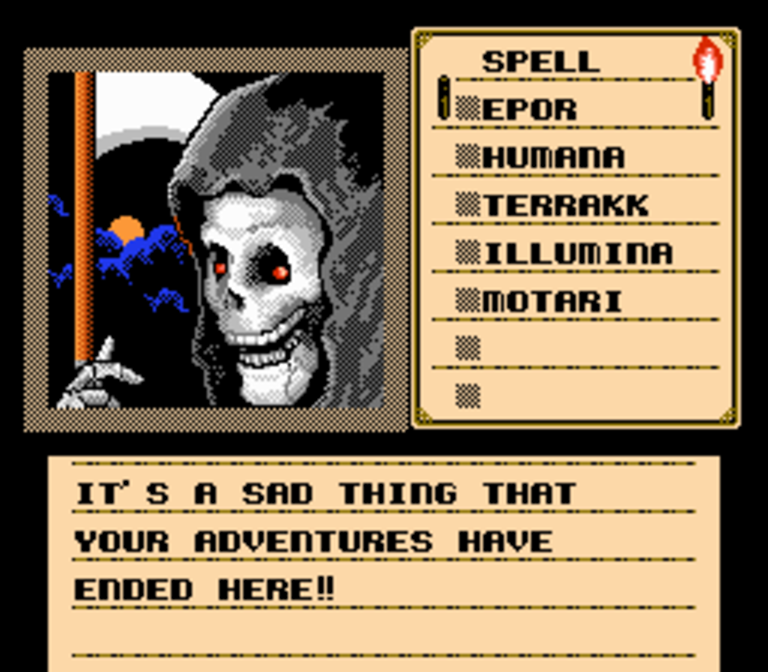 As you move through the rooms the torches you have slowly fade. If you forget to light new torches the game ends and you die, but additional torches can be found along the way.

Game play is very much item collection and combination based. The very first screen of the game shows a door with a little skull above it, which can be OPENed and hides a key. This key is needed to unlock the door in the second room of the game …. and so on. You also learn a handful of spells, most of which are mostly used to solve a single puzzle.

The game is very linear but the story progresses intuitively. If you pay attention to the clues the puzzles aren’t overly difficult, but I did have to refer to a walkthrough a couple times mostly out of laziness. I find these types of menu-driven games to be enjoyable as they feel like upgraded versions of the interactive fiction text adventures (like Zork) I started off with as a kid. 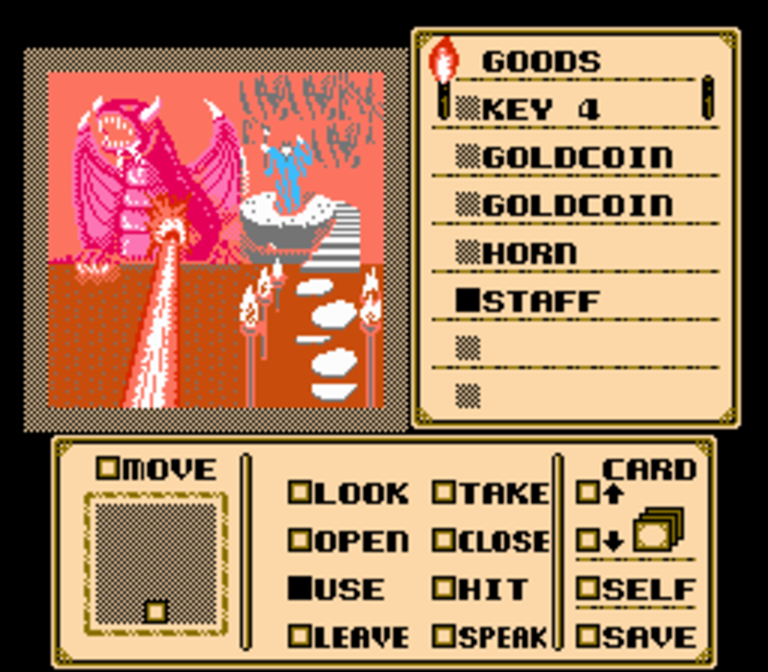 Assuming you found all the right items, were able to find the ferryman and cross over to the warlocks lair and solve the puzzle to open the door you’ll finally find the warlock you’ve been sent to beat. You have to combine multiple items to create the staff that can be used to shoot the behemoth, causing it to return to the abyss while dragging the warlock down with him.

Overall I enjoyed the game. I’ve played through this title many times over the years as you can burn through it in about an hour while still enjoying navigating familiar puzzles. A remake was released by Zojoi in 2014, but I’ve never actually tried this version (though the release trailer look pretty sweet).

Though Shadowgate isn’t the first in the MacVentures series, it’s definitely my favourite. If you’ve never tried a menu-driven adventure game and are wondering where to start, look no further ;) 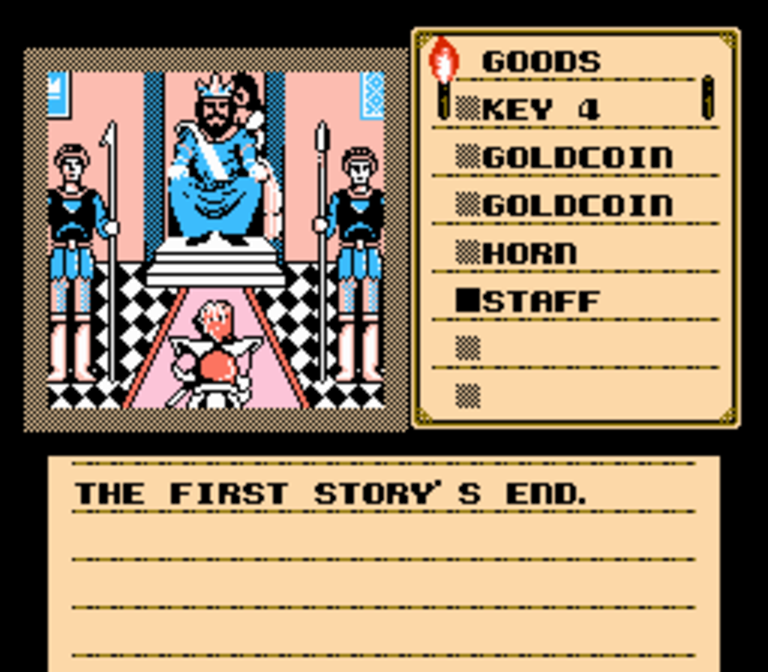