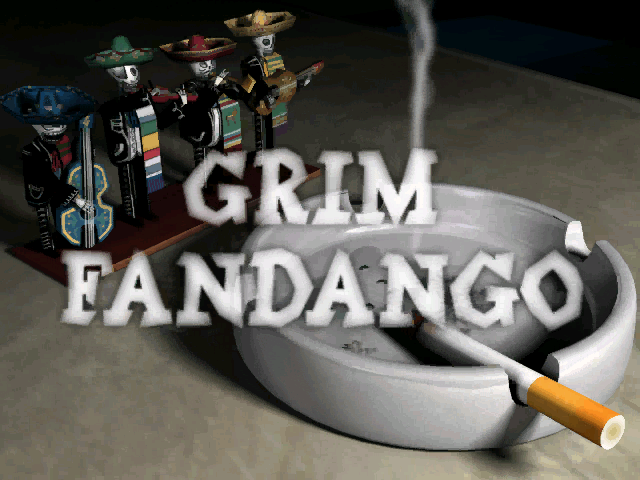 Grim Fandango is a 1998 adventure game directed by Tim Schafer and developed and published by LucasArts for Microsoft Windows. It is the first adventure game by LucasArts to use 3D computer graphics overlaid on pre-rendered static backgrounds. As with other LucasArts adventure games, the player must converse with characters and examine, collect, and use objects to solve puzzles.

Set in the Land of the Dead, through which recently departed souls, represented as calaca-like figures, travel before they reach their final destination. The story follows travel agent Manuel “Manny” Calavera as he attempts to save new arrival Mercedes “Meche” Colomar, a virtuous soul, on her journey. The game combines elements of the Aztec afterlife with film noir style. 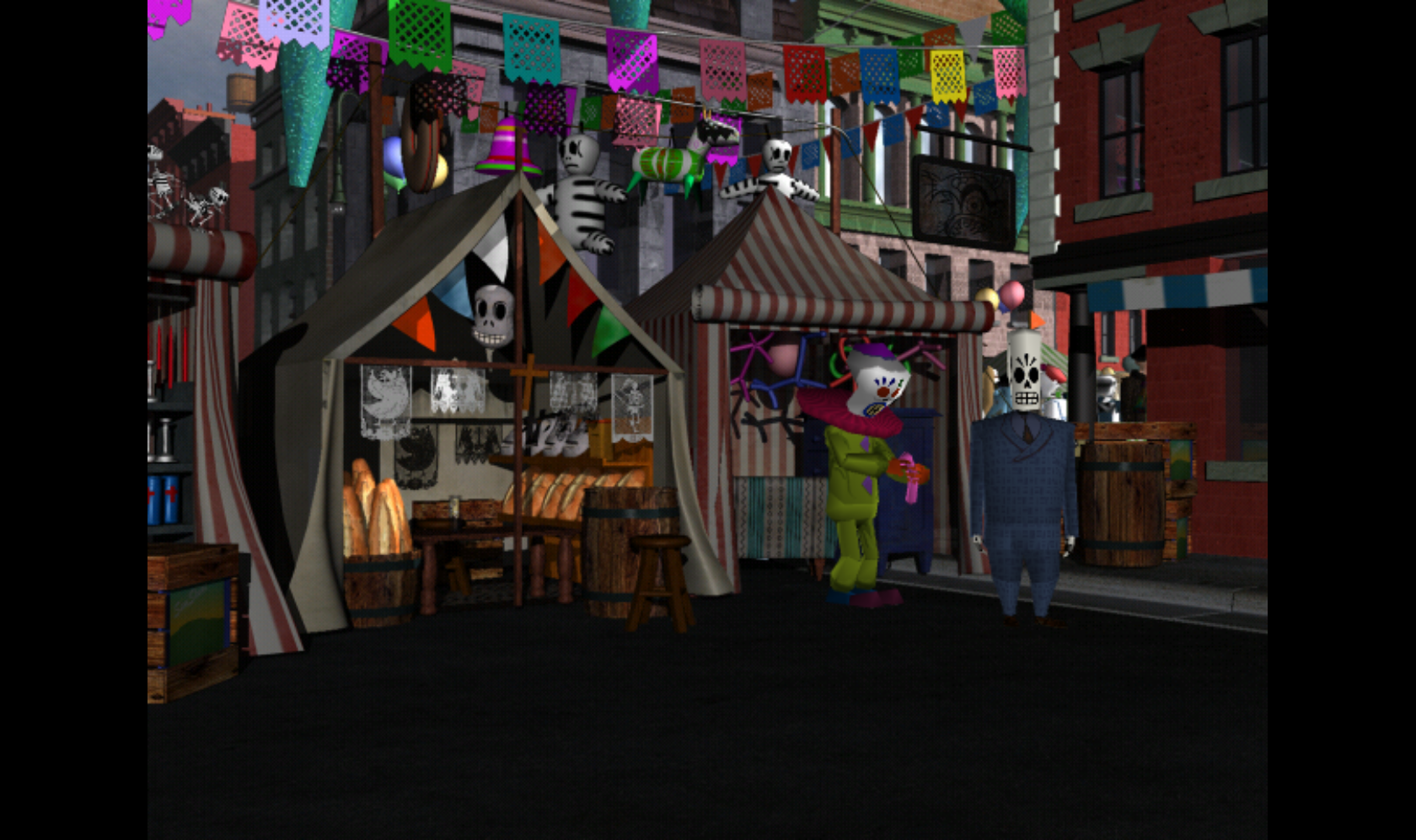 For a game late in the life of the golden age of point-and-click adventures games the graphics are as good as you’d expect. All characters are 3D models and the 2D backgrounds are beautifully rendered. The visual style is very different in that you’re following dead characters through the land of the dead and everything has a Mexican cultural twist to it. Honestly it looks really cool and is a breath of fresh air from the traditional fantasy settings of a lot of adventure games. 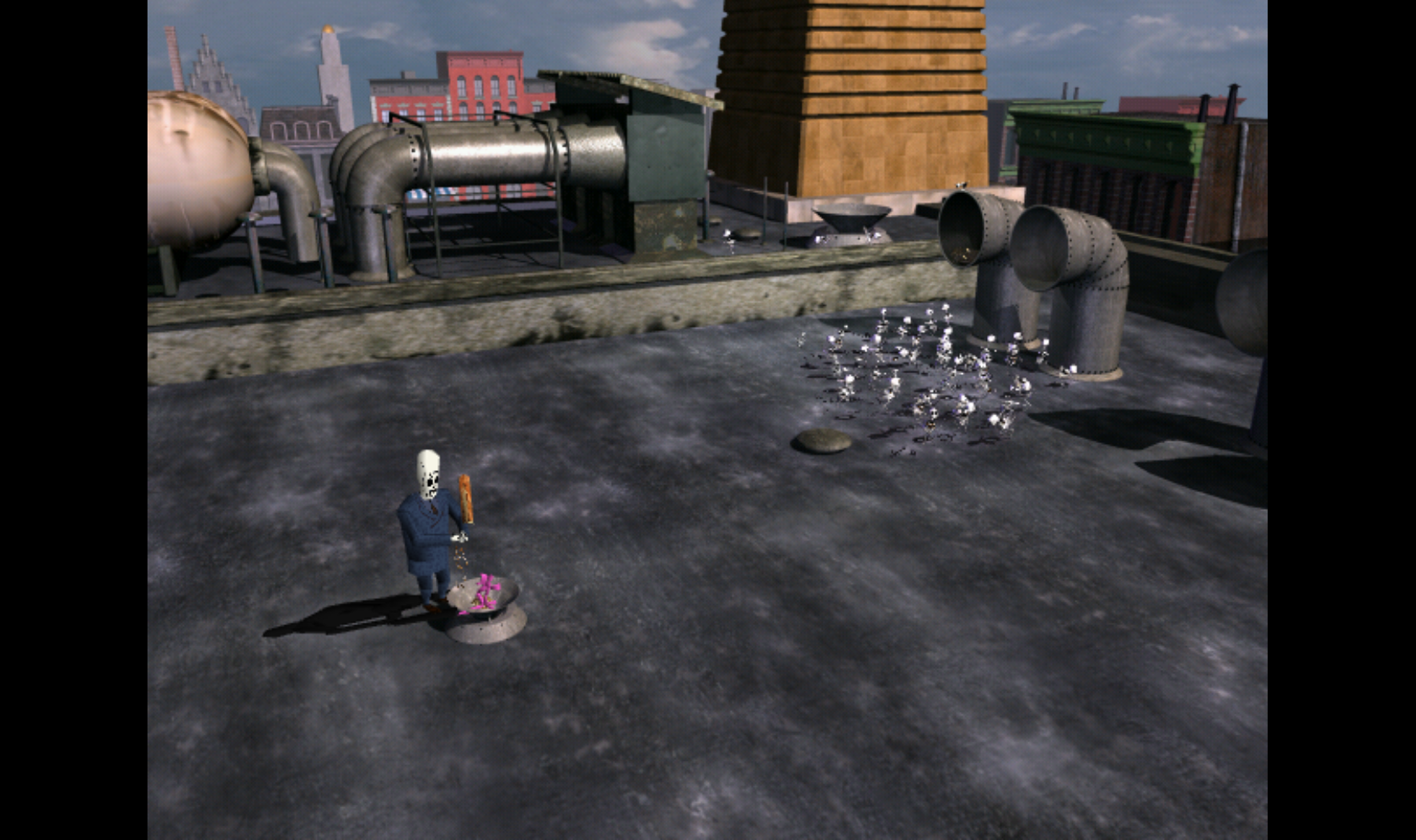 As you would expect for a game of this genre the majority of your progress occurs via fetch quests, item combination and cut scenes. This game doesn’t have some of the “moon logic” older games contained (I’m looking at you “Monkey Wrench” puzzle from Monkey Island 2). There are very few items you need to pick up, and looking at the items in your inventory typically gives you enough of a clue to help clarify how/where/when the item should be used. The only exception is the Scythe which you have throughout the game and is used to solve multiple puzzles. 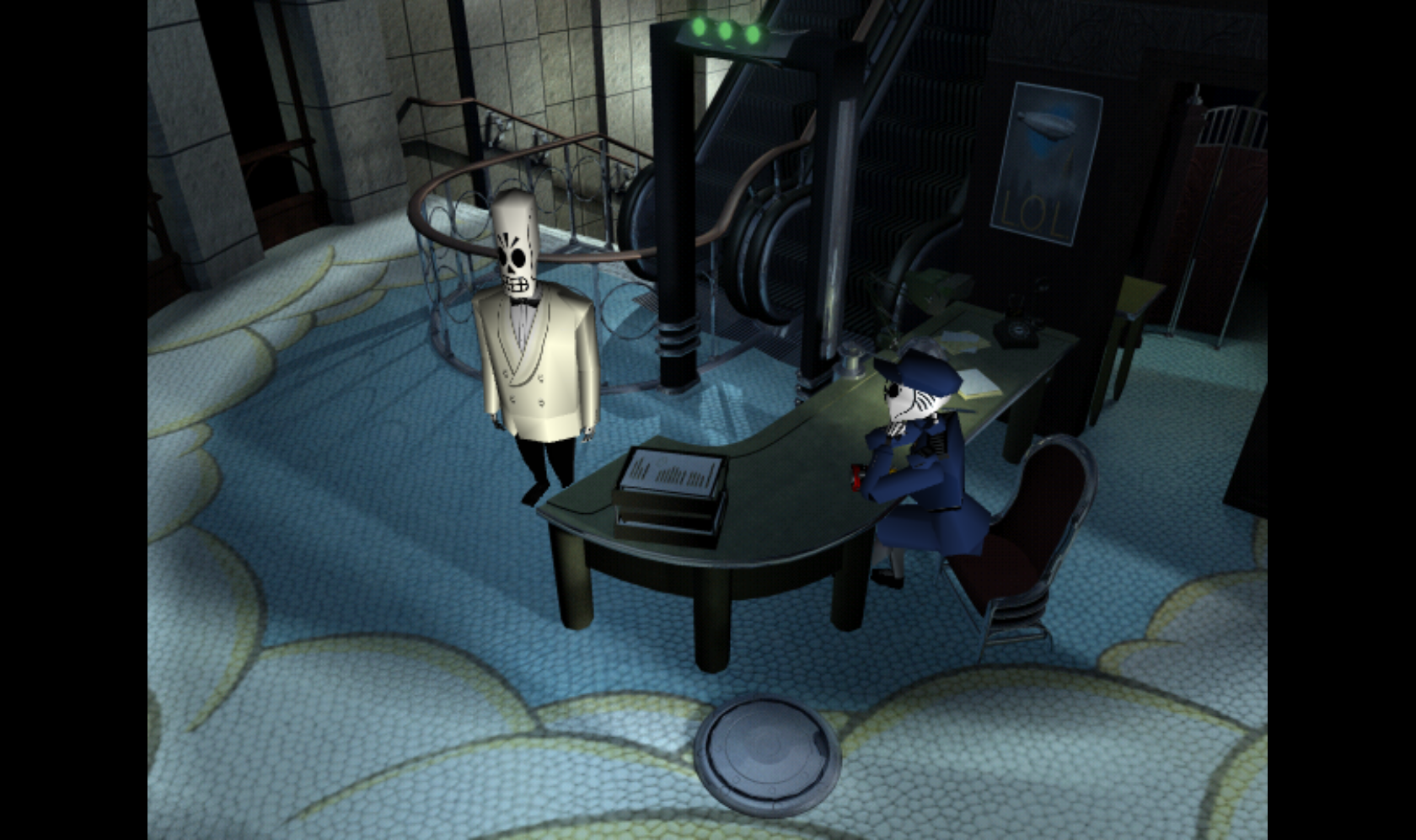 Though story is well written, the voice acting is good and the game progresses logically, once huge strike against this game is the controls: Tank Controls to be precise. I fucking hate tank controls! Though you can’t accidentally get yourself killed or fall off anything, the controls are so awkward and it can take forever to properly align yourself to get Manny to look at an object to interact with or an item to pick up.

I’m sure from a design point of view this made sense at the time as Manny moves his head to “face” hotspots you can interact with - but it really detracts from the game play after a while.

As you progress through the game the save screen slowly reveals the map of the game to indicate your progress. I feel like these types of aesthetic touches really add to the game and really reinforce what great game designers LucasArts had at the time. 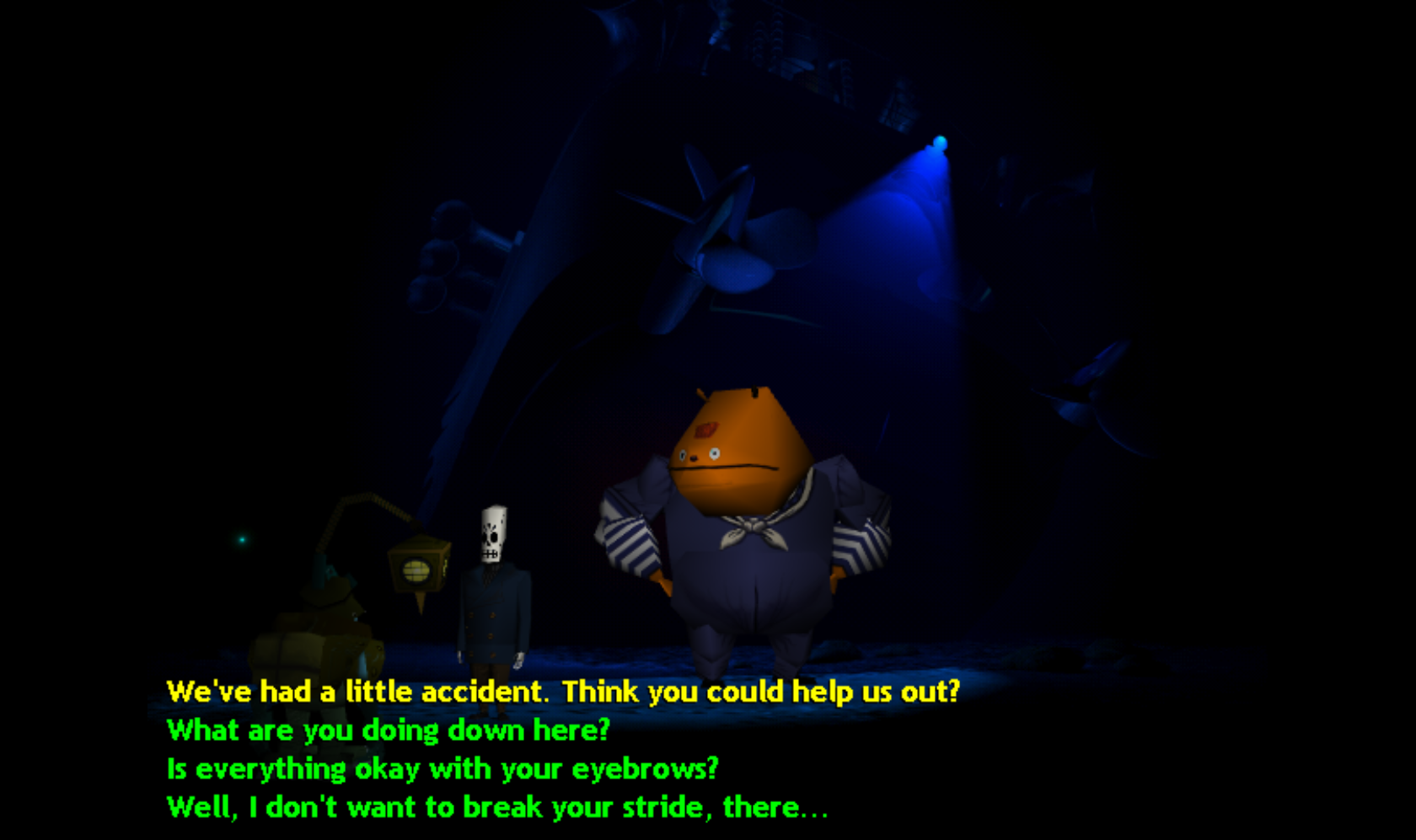 Interacting with characters is completely menu driven. This feels a little “on rails” as there are a limited number of topics to choose from for each conversation and there are typically no “wrong” answers to anything that carry any negative repercussions. They serve their purpose though and convey tips, next steps and plot points appropriately. Since the voice acting is so well done I didn’t really mind that these interactions seemed a bit wooden and forced. 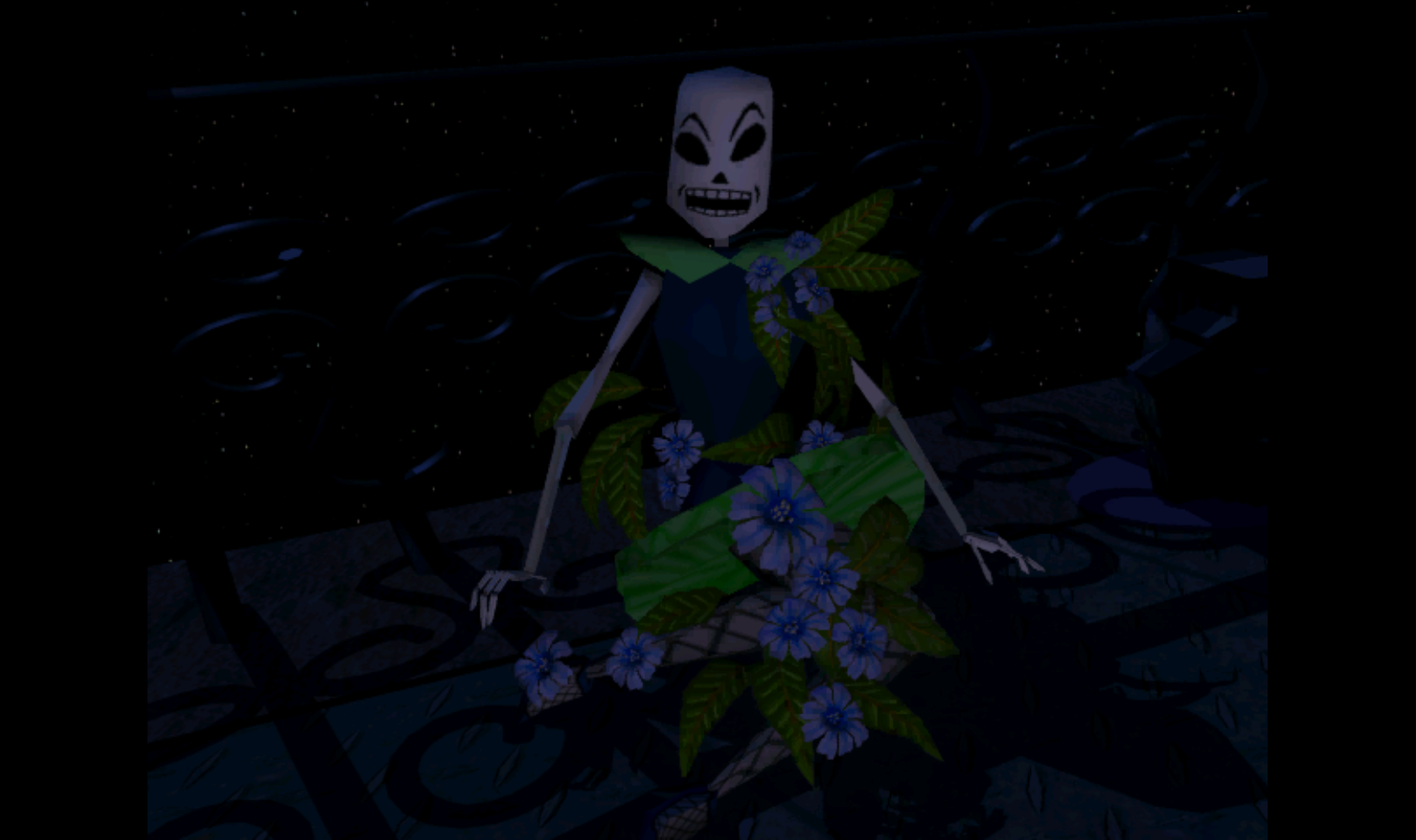 Some of the story elements are actually extremely clever. The whole concept of characters being “sprouted” (killed) makes a lot of sense (in retrospect) as they’re dead to begin with … so how do you kill them off? The souls themselves can suffer death-within-death by being “sprouted”, the result of being shot with “sproutella”-filled darts that cause flowers to grow out through bones, rapidly feeding off the calcium of the soul’s skeleton. This just comes off as extremely metal ;) 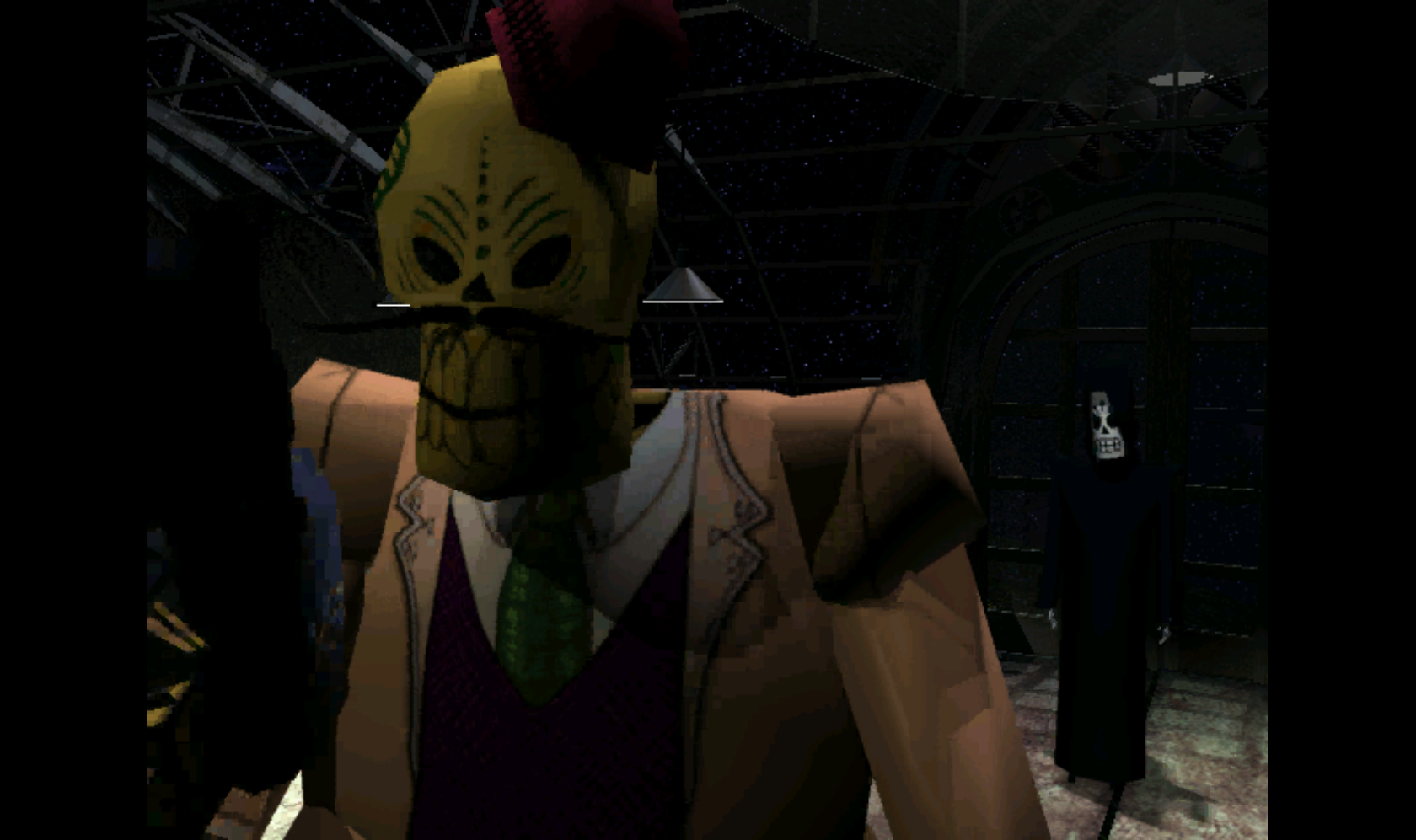 You eventually get to the final confrontation with Hector LeMans, complete a couple more fetch quests to setup the endgame and rid the world of a very bad dude. The souls of the departed are once again free to receive priority passage to the afterlife (folks that were good during their lives at least …). 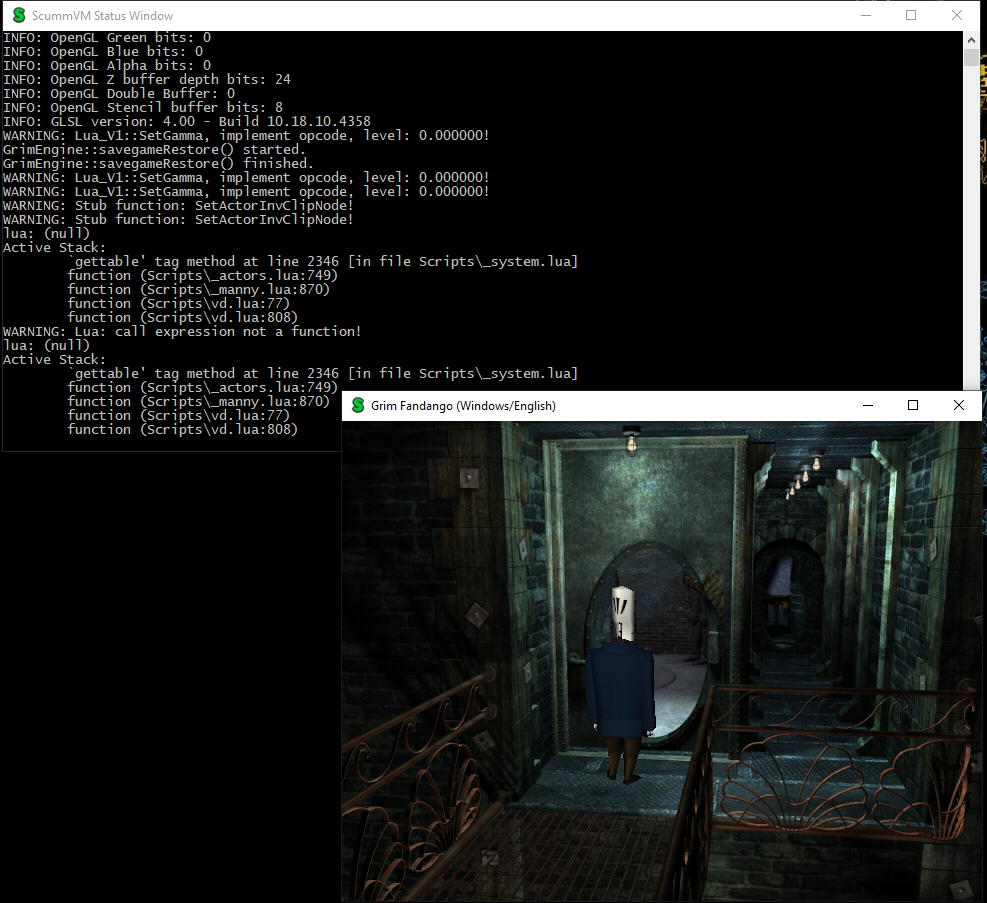 I was running this game using ScummVM and I stumbled upon Ticket #13139, which lead me down a bit of a debugging rabbit hole. The game’s scripted logic is written in Lua so I went on the hunt for a disassembler to see what the failing logic was doing (see the linked ticket above if you’re curious). This lead me to Bret Mogilefsky’s excellent post on “LUA IN GRIM FANDANGO” I’d also recommend.

Grim Fandango doesn’t have a huge amount of replayability, but it is a lot of fun the first time you run through it. If you appreciate a good story though, this is definitely a game worth playing at least once. 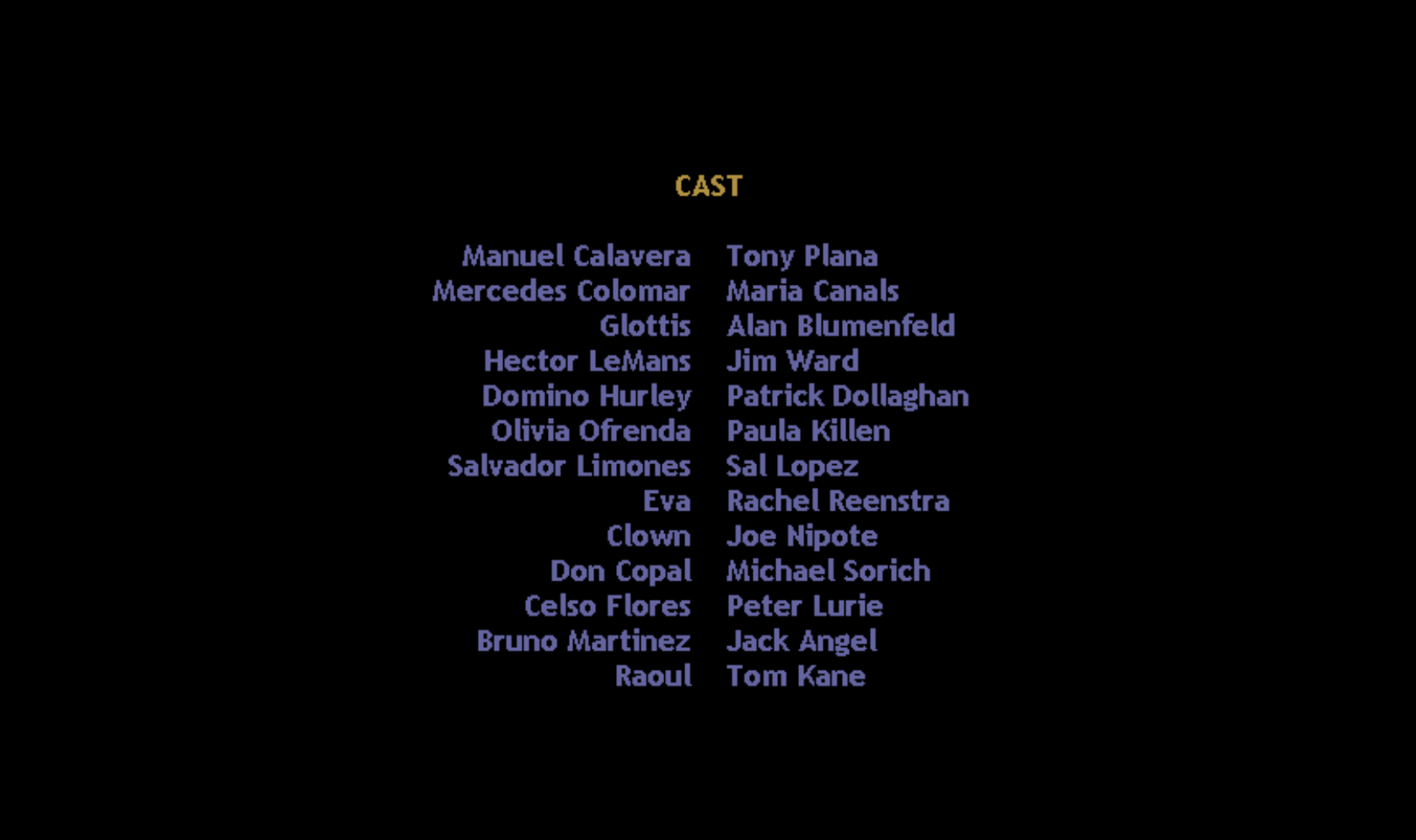 This review is part of the “Let’s Adventure!” series. See all reviewed games sorted by rating here. Leisure Suit Larry in the Land of the Lounge Lizards is the first installment in Sierra’s Leisur...