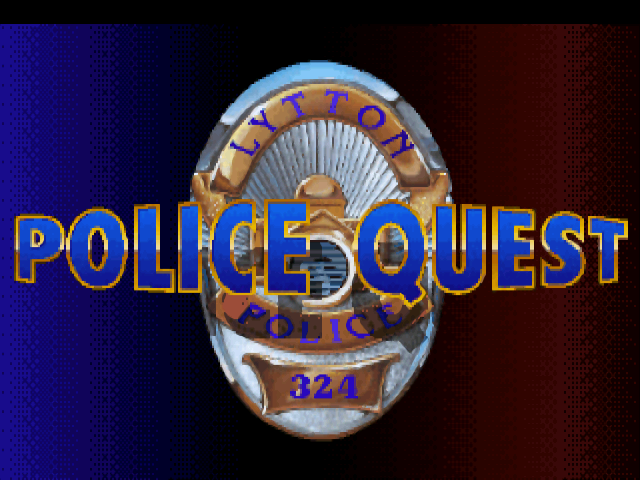 Police Quest: In Pursuit of the Death Angel is an adventure game (and police simulation) produced by Jim Walls for Sierra On-Line, and originally released in 1987 built on their AGI engine. It was remade in 1992 using 256-color VGA graphics and the SCI engine, which dramatically improved the appearance and audio of the game, and replaced the command line interface with point and click.

Part of the goal of this series of reviews is to give me a chance to replay a bunch of games that meant a lot to me as a kid, and Police Quest was one of those. I loved the story, the characters, the text parser, having to rely on the manual for radio codes and booking codes … all of it.

It’s been a good 20+ years since I played this last, so I figured I should start with the version I remembered. I think I got about 20 minutes into my play through of the AGI version before I gave up as the driving segments were … painful.

I decided to switch over to the SCI version which has numerous quality of life improvements such as a point and click interface, simplified driving interface, ability to inspect buildings while driving so you know where you’re going … and less ways to die on the road. If you don’t stop at a stop sign you just back up and try again without needing to restore from a save. 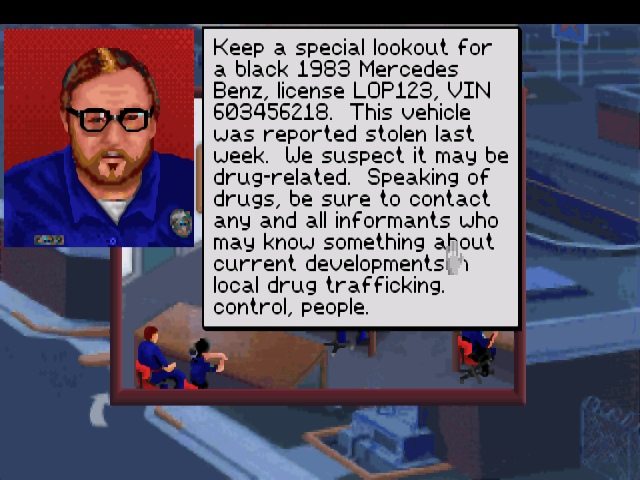 The plot follows officer Sonny Bonds, who is a traffic cop in Lytton, California. You start out by sitting through a briefing, getting in your squad car and patrolling the streets. You investigate a car crash, pull over and arrest a drunk driver, issue a speeding ticket and stop for coffee with a fellow officer. 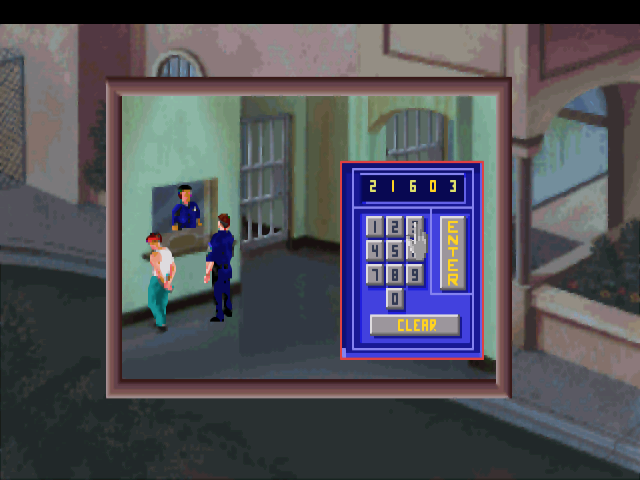 When you arrest someone and bring them in for booking, you have to enter the right booking codes … and there are generally multiple. I remember enjoying this long ago, but now I found it to be a bit tedious. Unfortunately, tedium was a running theme throughout this game. 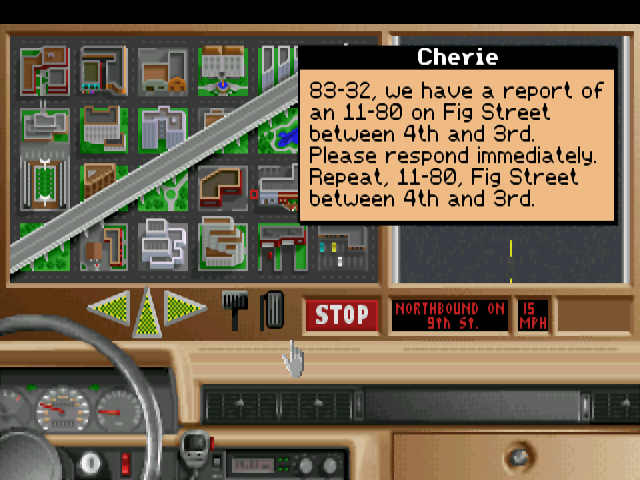 Since you’re a traffic cop, you have to drive around looking for offenses (which you are alerted to after “a while” via radio), but in the meantime you’re just aimlessly driving around. A big part of this game is just driving back and forth between locations which feels like “busy work”.

Don’t worry though, you’re only a traffic cop for about half the game as you also have an opportunity to apply for the narcotics unit. Apparently there’s a big drug problem in Lytton, and it turns out one of your fellow officer’s daughters gets caught up in this. I actually found this part of the story to be a lot more impactful replaying this as an adult (with kids of my own now) and give Sierra lot of credit for tackling something like this in a game. 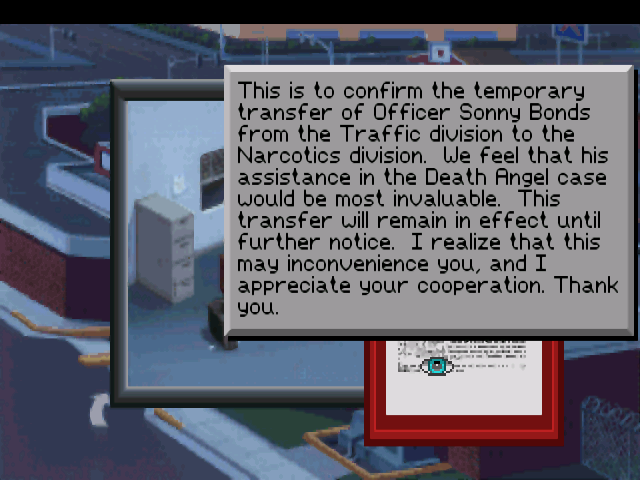 There is a new drug kingpin in town going by the name “The Death Angel” (hence the title of the game :P), and as you start to get closer to him after arresting one of his dealers you get a temporary promotion to narcotics. You get to go on a stakeout, arrest another dealer and do more “police stuff” (getting a judge to issue a no bail order for the dealer). A prostitute you meet in a bar turns out to be an old girlfriend of your from high school and she agrees to help you when you go undercover to try and get closer to the Death Angel. 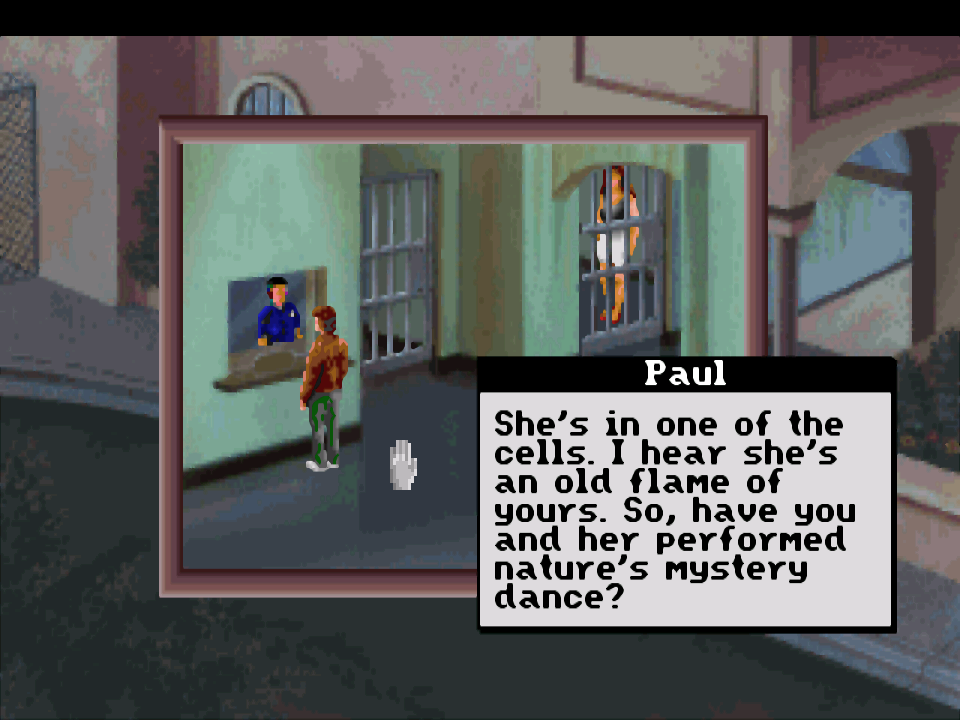 You dye your hair, go to the Hotel Delphoria (yup, more driving), have a few drinks at the bar and get invited to a high stakes poker game. After winning enough hands (or just clicking “No, But Win Anyway” when asked to start playing) you end up finding out that one of the players was Jesse Bains … aka the Death Angel. 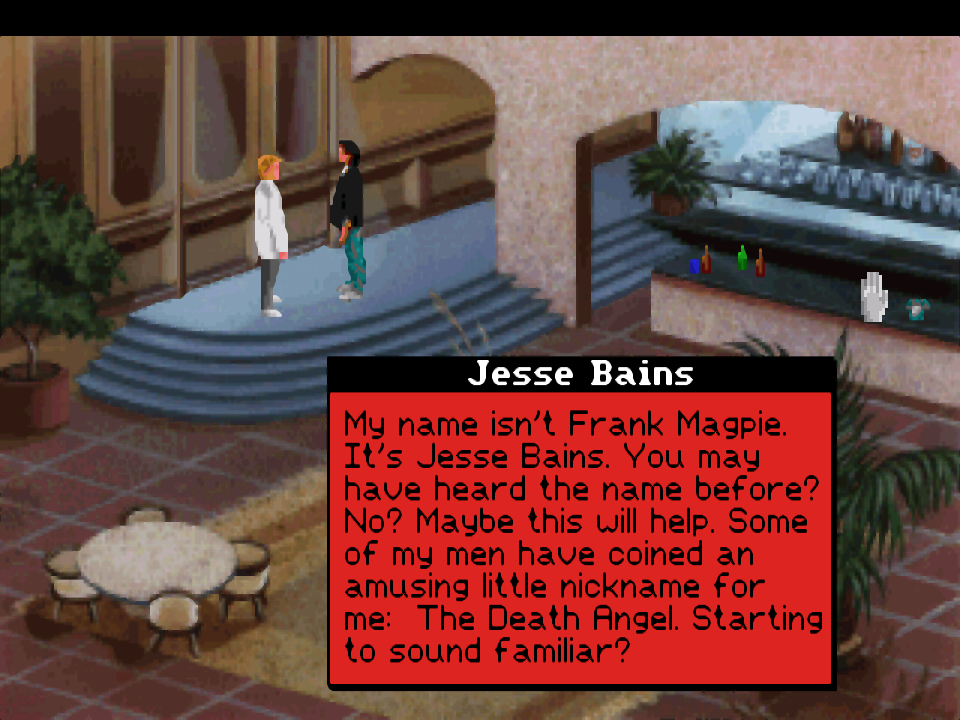 Bains finds out you’re a cop and pulls a gun. Assuming you remember to radio in the hotel room you’re in, backup will arrive and shoot Bains (or he’ll shoot you) and thus ends the first installment of the Police Quest series.

I’ve got to be honest - it was not as much fun as I remember it being. The SCI version is exponentially more playable than the original AGI version, and though the story is compelling getting through this game feels like “work”. Sierra really tried hard to make this an accurate police operations and process simulator, but that results in long segments just being boring.

I enjoyed the updated graphics such as the interior of the car while driving, but you’re stuck staring at that view for way too much of the game. The music and sound effects are forgettable, but still an improvement over the original. Since I have fond memories of all 4 police quest games (I don’t count Police Quest: SWAT). I’m still looking forward to replaying them, but I hope the rose coloured glasses I seem to have had on all these years for this game doesn’t apply to the whole series … 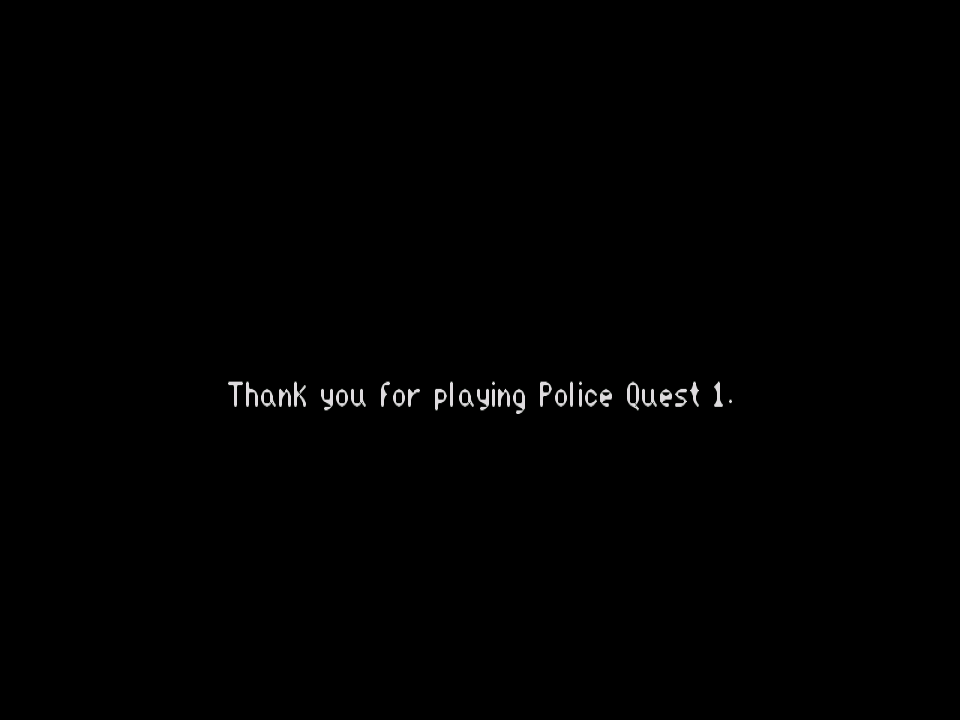 Police Quest 1 was reported to have been used as a training tool for police officers, which can explain a lot of the rigidity. Unfortunately this hurts the overall play experience.