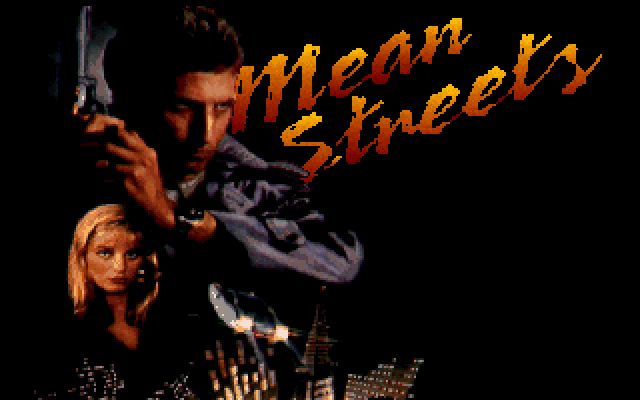 Mean Streets is set in a dystopian cyberpunk neo-noir world is the first in the series of Tex Murphy mysteries. In 1998, Mean Streets was remade as Tex Murphy: Overseer, which I’ll get to eventually :).

You plays the role of Tex Murphy, a down-and-out private investigator living in post-apocalyptic San Francisco. Tex is hired by a beautiful young woman named Sylvia Linsky to investigate the death of her father, Dr. Carl Linsky, a professor at the University of San Francisco. Prior to his death, Carl would not talk to his daughter about the secret project he was working on, and days later, he was seen falling off the Golden Gate Bridge. Sylvia suspects murder, but the police say it was routine suicide. 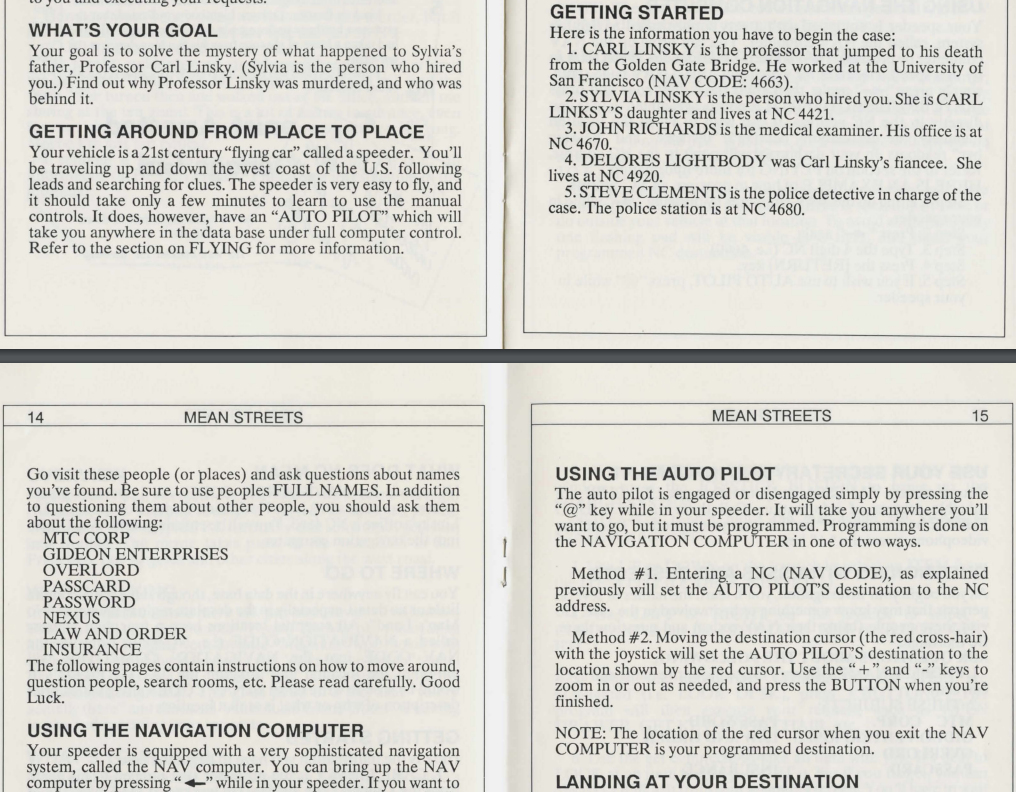 To help get him started, Tex is given $10,000 and a few leads. The player is referred to the game’s manual for a list of their leads. If you’re not just following a walkthrough you won’t actually be able to do anything meaningful right out of the gate as you’ll have no idea how to begin the case. 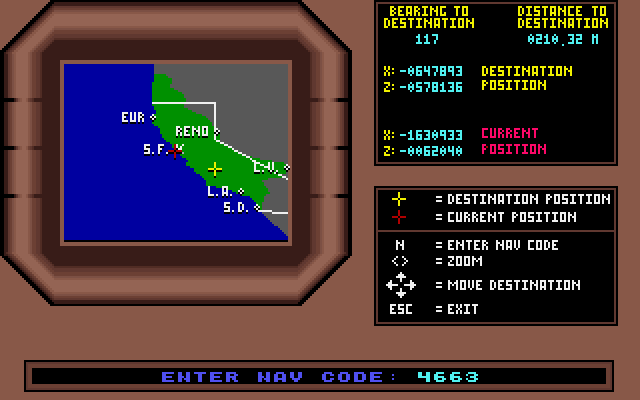 Moving around the game world is done by means of a lander, which is sort of a flying car (similar to what you’d see in Blade Runner). You enter a nav code, then either pilot your way there manually or use the auto-pilot. There’s a Warp mode that’s supposed to get you from place to place faster, but I could never get it to work … so I just found another way to speed the game up instead. 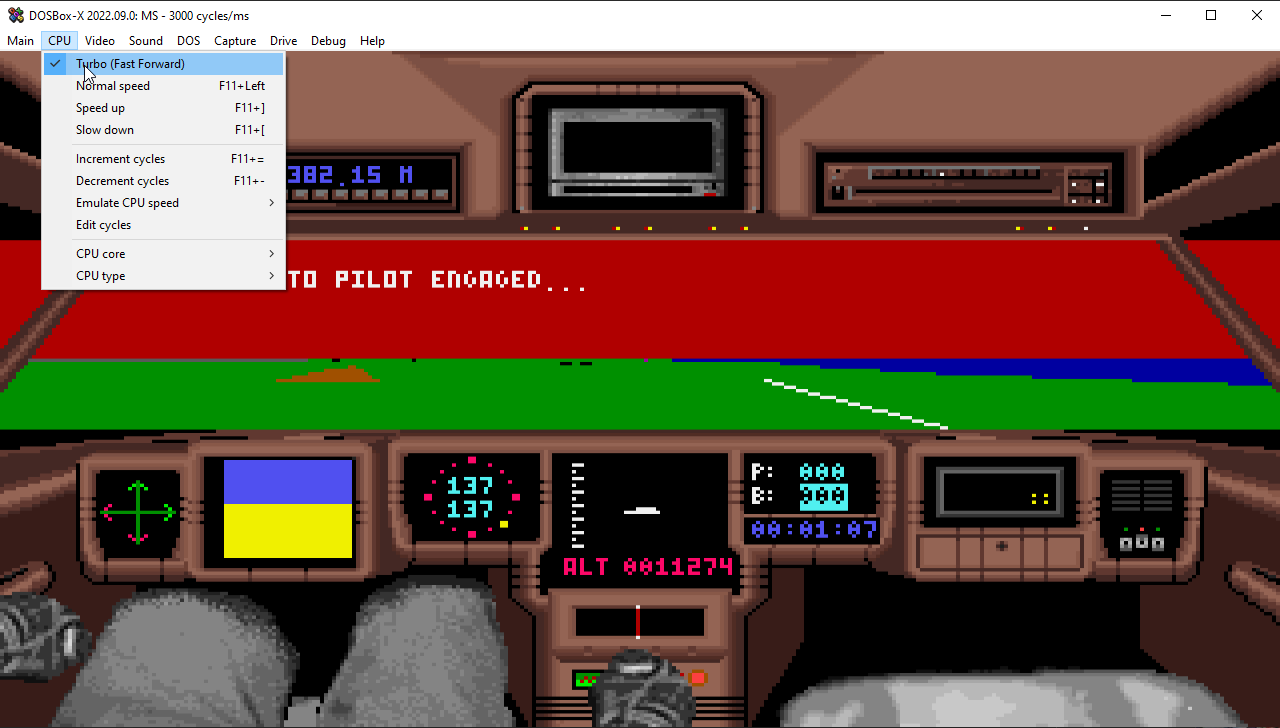 The story progresses by means of various text dumps, faxes and conversation screens. That’s really all there is to it and it’s your job as Tex Murphy to solve the case based on the story elements you slowly uncover by interrogating people and exploring a handful of locations.

Interrogation is also pretty straightforward. You have the option to ask questions, offer a bribe, or threaten the person with a little physical violence. Questioning involves asking about keywords, which will result in more information being provided or a generic response indicating you’ve picked the wrong keyword for that user. Note that you have to watch your spelling as the parser is pretty unforgiving and you may not realize a spelling mistake is what resulted in a generic response. 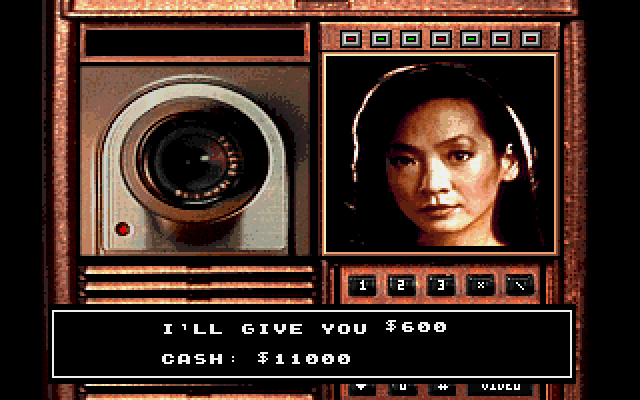 In addition to navigating to known nav codes to interrogate people, you also have access to vid phone you can call two people on: Vanessa and Lee. Vanessa can be asked various keywords to try and uncover additional information and nav codes, but Lee will require bribes. If either of them is able to produce information though it will come in the form of a fax. 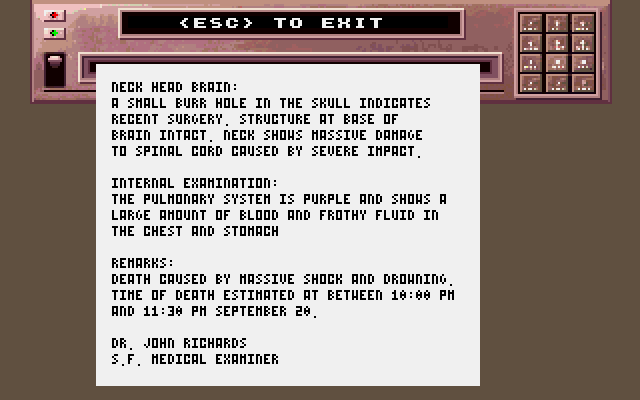 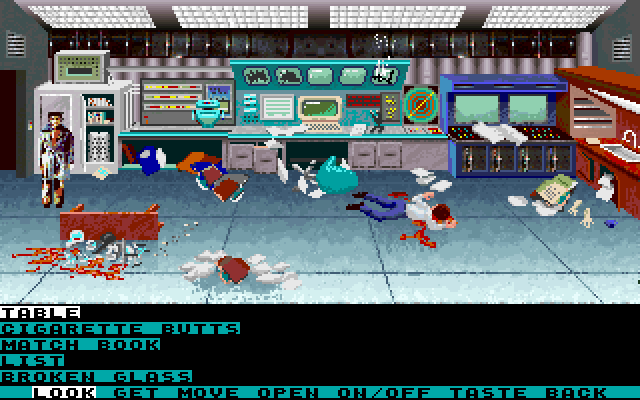 Some nav codes won’t lead you to a conversation, but instead to a single room you can move around and investigate. As you walk around you’ll find “areas” that you can interact with via a verb menu at the bottom of the screen. Here you can LOOK, GET, MOVE, OPEN, ON/OFF and TASTE select items to potentially uncover clues. I would HIGHLY recommend you MOVE EVERYTHING. This threw me off initially as you need to find keys in basically every location and they tend to be under or behind something unexpected (like a sandwich in one case). 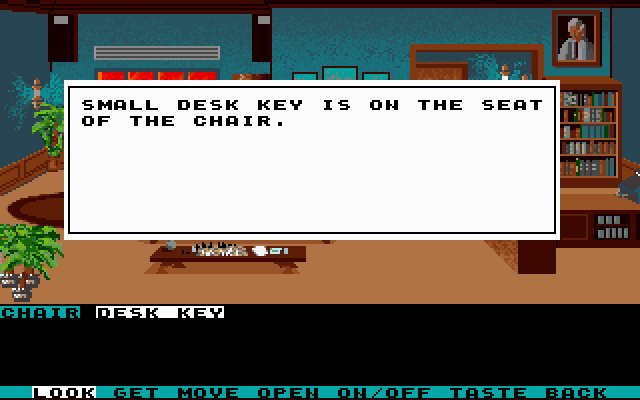 You will also need to GET everything you can. Make sure you LOOK at these items first since some contain story details or nav codes. You can go into your inventory later to examine these items too, but finding the right one can be tedious. 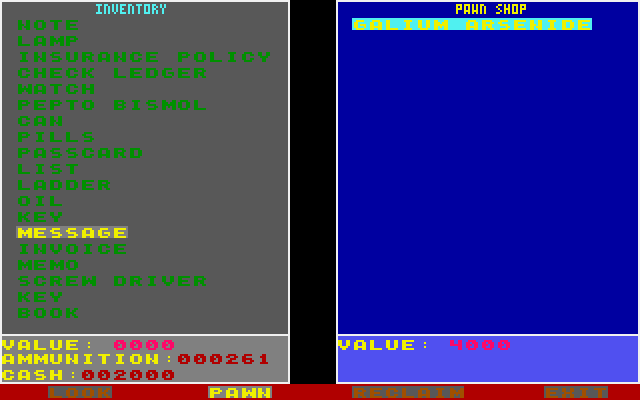 Note that the inventory is also where you can pawn items. This is how you get money for bribes, so make sure to pick everything up that isn’t bolted down as you’ll need all the money you can get! You can reclaim items that you’ve pawned as well, but honestly I never had to do this so I’m not sure what purpose it really serves (maybe you can pawn key story items?). 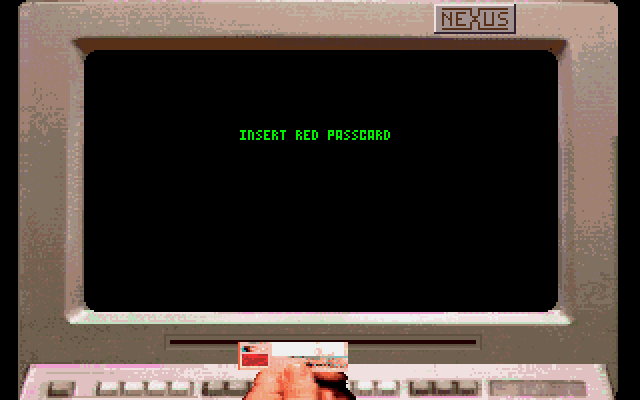 As you progress through the case you’ll learn you need to find the pass codes and key cards for 8 different scientists. These can be used to access various computer terminals to uncover more of the story from these scientists to help move the story along. Make sure you take notes as you read everything since you’ll need to extract keyword details to ask characters about to continue to progress. 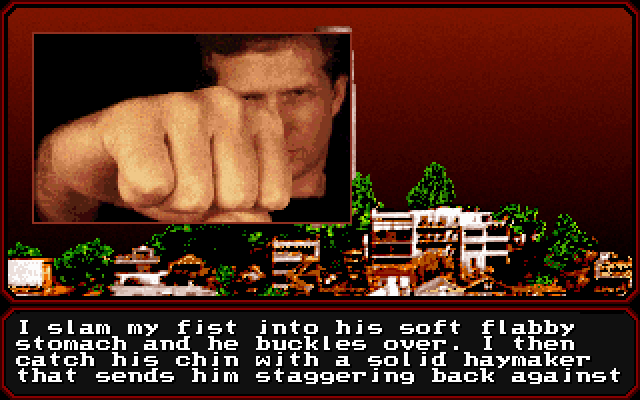 If you question a character about a keyword and they refuse to give you an answer (but aren’t indicating they don’t know anything) you can threaten them. This involves punching them in the gut and then having them cough up the info. Trying to do this on a character that isn’t being cagey will just cut to a screen of you being thrown out of the area the conversation was taking place and you’ll have to go back and resume the discussion. 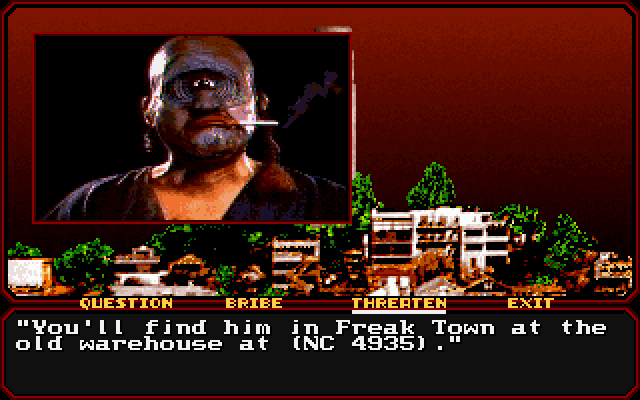 Apparently this world also has mutants in it

I didn’t really understand why the world Tex is exploring contains mutants, but there are a couple you’ll interact with. There’s allusions to some characters hating freaks so I’m guessing it’s woven into the plot somehow, but I must have missed it. I’m sure it would have added to the story but clearly I wasn’t paying close enough attention … 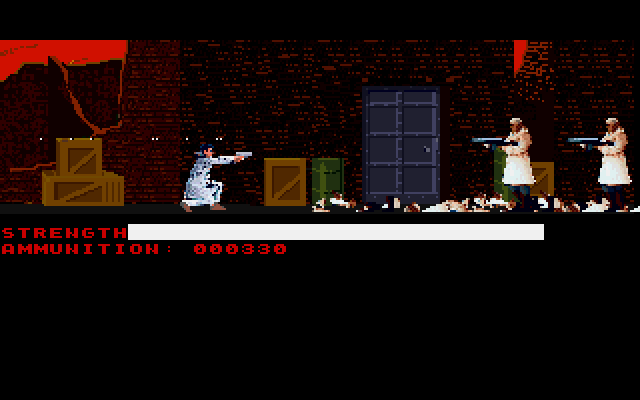 Before you can investigate certain areas or interrogate certain charters you sometimes have to go through an arcade sequence. This is always 2 screens of baddies with guns trying to shoot you. They only stand and shoot so you can duck down and they’ll never hit you. There are obstacles you can’t shoot through when you’re crouched though so you’ll need to time when you return fire so you can stand up and shoot and keep moving to the right.

You have limited ammo, however you can find more in the various areas you investigate so you shouldn’t have to worry about running out. 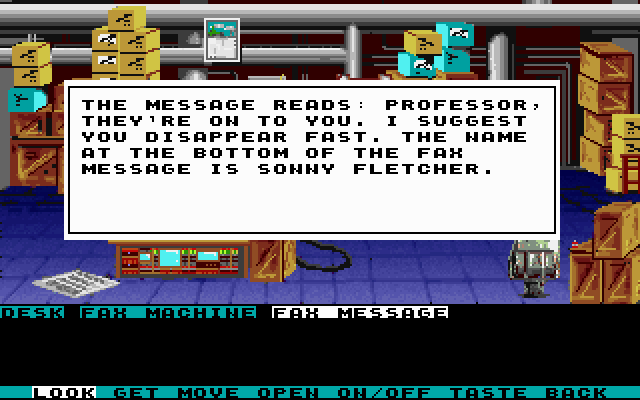 It is a bit frustrating that there’s no real emphasis placed on any of the keywords you’re supposed to keep track of to use in your investigation, so you’ll need to take some pretty thorough notes while you play. Most proper names, business names or organization names should be written down as you’ll likely need to follow up on them with each and every character - so plan to backtrack as you learn new keywords. 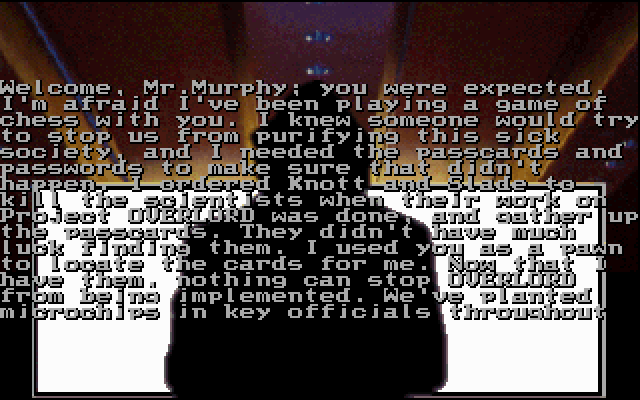 Eventually you’ll work your way to Alcatraz where the shadowy MTC organization you’ve been chasing is headquartered. The endgame involves using the 8 key cards and pass codes in a random order (the game will prompt you). Assuming you had all this written down and can get the info typed in correctly in 60 seconds, you win the game. 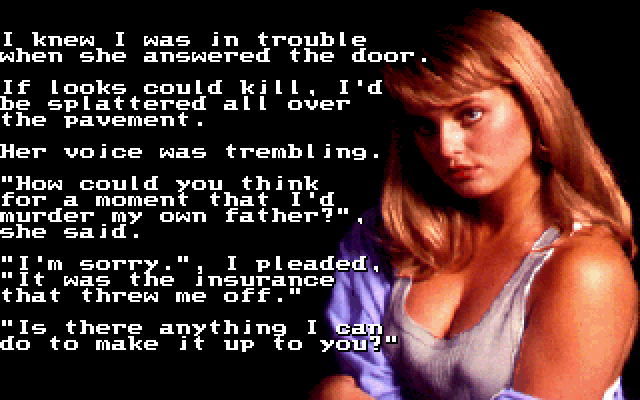 Though your interactions with the game world are pretty limited, for a late 80’s game this is actually quite well done. I would consider this to be more in line with what you’d call a “Visual Novel” nowadays though. The arcade sequences are pretty repetitive and there isn’t really any increase in the challenge or complexity - they’re just in there to kill time.

Autopilot is a killer feature since you do SO MUCH backtracking and navigation, and though you have the option to pilot the lander yourself this gets old REAL fast. 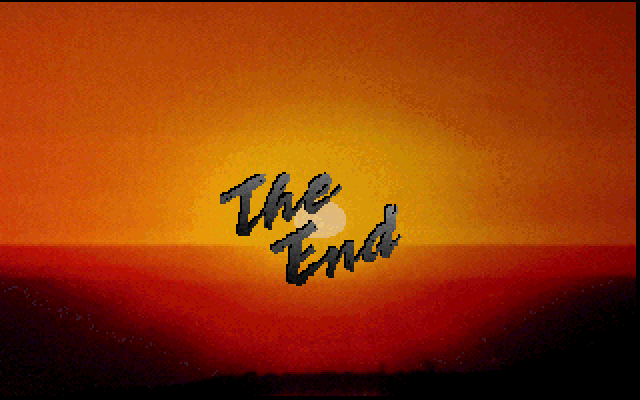 As far as detective stories go this is a pretty good one. The pacing is good, the interfaces are intuitive and though moving from conversation to conversation via the navigation system can be a bit of a drag, it’s not that bad overall. I’m a curious to see how the re-implementation of this game changes up these elements, but I guess I’ll find out when the time comes :)