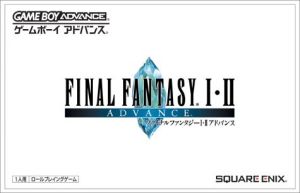 I’m excited to finally be able to review this game, as it’s the direct sequel to the game that got me into RPGs way back in 1990-91.

I actually played a bit of this game in the late 90’s using the Demiforce translation patch (back in the good ol’ NESticle days :D), but didn’t make it very far.

For the actual play-through, I decided to go with the Dawn of Souls version for GBA, as this includes updated graphics, an “official” translation and an updated soundtrack.

Note that since I’m reviewing a remake, I’m not sure if some of the gameplay elements below were available in the original. If you happen to have actually completed the original NES version and spot an error, please let me know ;)

The story is pretty standard JRPG fare. The Emperor of Palamecia is trying to take over the world. He summons some monsters that destroy the home town of Firion, Maria, Guy and Leon. The first three are rescued by a rebel faction and taken to another town (where they join the rebellion).

Leon goes missing. The party wants to find him. Off they go. 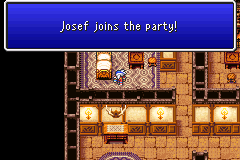 You’ll meet various characters along the way that will join your party and fight with you. (SPOILERS! they usually die by sacrificing themselves so you can continue the quest …)

As you go along, you find out more about the Emperors plan, fight with the Dark Knight who turns out the be Leon, have him join up with you and eventually make your way down to the castle of hell (aka Pandaemonium) to fight the Emperor. 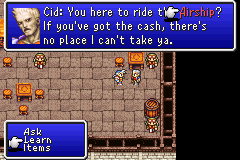 FFII introduces a couple of interesting gameplay elements that were not reused in any future entries in the series.

First, key character conversations allowed you to Learn keywords, which you could then Ask other key characters about. This mechanic helps advance the story as you have to ask various characters about plot points you learn as you go, and they then point you in the direction of your next objective. 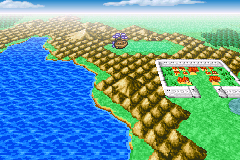 FFII has multiple modes of travel on the overworld. As with the original, there are ships and an airship, but FFII introduces the chocobo.

There is also a bunch of “cut-scenes” added to this incarnation (which would not have been available in the original NES version). These are nice as they aren’t excessive or long, but help advance the plot. 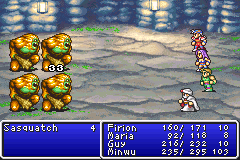 Instead of leveling up your characters by fighting and gaining EXP, FFII opted for a system where the more you use a skill, the better you get at it.

This also applied to taking damage. The more damage a player took, the higher their strength and HP levels would go.

I thought this was a very interesting mechanic, and I’m not really sure why this didn’t make it into any future games. 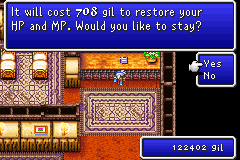 For some reason, this installation in the series decided to introduce an Inn system that charged based on how much healing you required. This proved to be a bit annoying until you realize it’s a LOT cheaper to just use cure spells to get everyone’s HP back up, THEN rest at the inn ;) 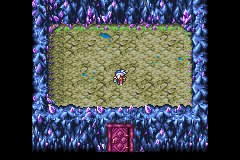 The battles aren’t necessarily difficult, it’s just a pain in the ass to have to wade through all these useless rooms.

On battles in general, once again I’m happy to be playing this game using an emulator, as the 8x fast-forward was my best friend.

The encounter rates in this game seem to be pretty high in most areas, and the fights are kind of sluggish. I found that for most non-boss fights, I’d just hit fast-forward and hold down the A button (thankfully, you don’t have to mash A in this game; just holding it down works :D).

Overall, I really enjoyed the game. The story (I feel) was much better than that of the original, or even FF III (not FF VI, which is still my favourite installment in the series!)

I really liked the leveling system, and found that since I didn’t run from many fights, I didn’t have to game the system by just attacking my own party members to boost their HP/defense/stamina stats.

I’m glad I jumped back into the Final Fantasy series for a bit; especially with a game I actually haven’t beaten before. Whenever I sit down with FF, it’s usually either IV, VI or VII.

I’m thinking the next Final Fantasy I tackle will likely be V, as I haven’t previously finished this (though I’ve gotten close). Not sure when that’ll happen, because I’m currently balls-deep in Lufia II ;)

Note that since I’ve finished the Dawn of Souls version of FFII, I have access to the Soul of Rebirth additional dungeon.

I’m hoping to actually play this and add to this review, or just publish a minor post to cover what was added therein.

I’ve been waiting write this review for a very long time. I love the Final Fantasy series, and although I got the original back in ‘90, I didn’t really fall in love with the series until I played...