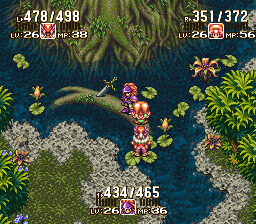 Seiken Densetsu 3 (聖剣伝説3) is the third installment in the Mana series. It’s the sequel to Secret of Mana, which is the entry into the series that most North American gamers would be familiar with.

NOTE I ran these screenshots through pngcrush (ls *.png | while read line; do pngcrush -ow -brute $line; done) to get the size down a bit ;)

I’m leaving these images in here as they were part of my “journey”, though hopefully they don’t deter anyone from playing this game, as the game is fantastic.

First off, if you’re a fan of Secret of Mana, the initial “feel” of the game will be familiar, as will the art style and sound.

Whereas SoM had you gradually encounter the two other playable characters at set points in the game, SD3 has you selecting your 3 main characters before you even begin.

I decided to go with Duran, Carlie and Kevin (something about a werewolf named Kevin made me chuckle :P). Duran’s story starts off with the castle where he lives being invaded by a wizard who almost kills him. The wizard lets Duran live, so naturally Duran has to set off on a quest to find and defeat the wizard.

On this journey, he’ll run into the other characters I selected (Kevin and Carlie), and each of their stories will mix into Duran’s. This is actually a really cool element of this game as it gives it a lot of replay value. No matter what combination of characters you pick, their stories will all overlap. Also, you’ll run into all the other characters you didn’t pick, so every character makes an appearance throughout the game. 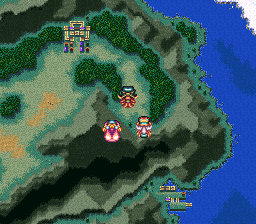 You travel around the game mostly on foot initially, but eventually new methods of travel will open up. As with SoM, you can get to certain areas via Cannon Travel (though there’s a couple of fetch-quests before you can actually take advantage of this). There’s also a ship, a weird turtle thing, and eventually Flammie the dragon.

The combat system is reminiscent of SoM as well, though this time around it feels a lot more “button mash-ey”. I found that I just spammed the B button throughout most of this game and didn’t really use any strategy during combat; aside from healing periodically. 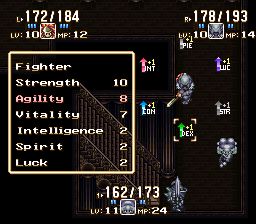 You get experience by killing enemies, which will allow you to level up your characters. Leveling up lets you increase various stats, that should make your characters perform better in future battles.

As you make your way through the game, you’ll start finding these pillars that are guarded by stronger enemies. These are the Mana stones, and apparently contain God-beasts that will be awakened if you shatter the stones.

These stones can also be used to change your character’s class. This is another cool aspect of this game, as it give the leveling system a bit more flavour. You can change classes twice in this game; once at level 18, and again at level 38. Each of these classes is aligned with either “Light” or “Dark”, and gives the character new skills/improvements.

The game can feel a bit “grindy” due to the need to constantly trudge back and forth between areas, and there are enemies on each screen. These battles are all avoidable, but you’ll want to level up for the boss fights, and eventually the God Beasts.

While you’re trekking though, you get to enjoy some really good background music. If you like Secret of Mana, you’ll love Seiken Densetsu 3. You can have a listen over at YouTube to get an idea what’s in store for you ;) 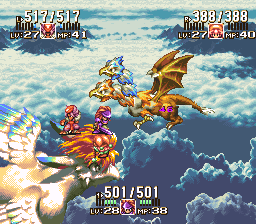 The artwork is also top notch. It’s really a shame this game never made it to North America as this is possibly one of the best looking SNES games out there. The background design, character design and monster sprites are all very, very well done. There is a lot of variety to the various regions of the world.

Once you’ve shattered all the Mana stones, you unleash the God Beasts. Their position is shown on the world map, and they can be fought in any order, but it’s a good idea to start from the top left of the map and work your way through them sequentially.

I learned this the hard way as I only play this game on occasion, and ended up forgetting where I was. This resulted in A LOT of backtracking to find the last couple of beasts.

I thoroughly enjoyed playing this game and would highly recommend this to anyone out there that likes JRPGs, action RPGs and 8/16-bit gaming in general. The graphics, music and gameplay are all very well done, and the story lines are interesting, even if there is occasionally some cheesy dialog :P

I finished this game over a month ago, so I’m still pretty slow cranking out these reviews …

I’m currently working my way through The 7th Saga for SNES since I clearly need more pain and frustration in my life :P When that game is annoying me, I’m also working on Sega Genesis version of Shadowrun.

That game was recommended by some of my readers on Reddit so I figured I had to give it a whirl. So far I’m actually really enjoying it, and it is VERY different the the SNES game of the same name.

Hopefully I’ll have more for you in the near(er) future :)