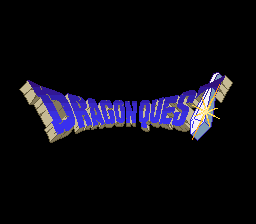 To defeat the Dragon Lord, you need to get three pieces of equipment of the legendary hero which are scattered across the world.

Beat the dragon. Save the princess. Beat the Dragon Lord. Done.

Gameplay is pretty straightforward. You start off in the castle, where the king explains your quest. You can talk to people in the castle, or leave and move on to the nearest town.

Here you’ll get a bit more info, or can buy supplies.

I think it’s kind of cool that the first time you leave the castle you can see the Dragon Lord’s castle on the world map. This gives you your target right away and you know what you’re working towards.

You interact with NPCs and the world via a command menu. One of the nice additions to the SNES version is that you no longer have to use a STAIRS command to go up and down stairs; just walk over them. 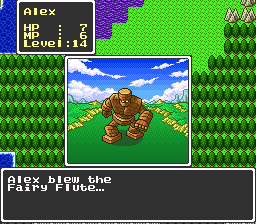 As you roam around the overworld and dungeouns, you’ll get into random encounters. You interact with these using a command menu as well, where you can select to either attack, use magic, use an item, or run.

Dragon Quest is a pretty short game. Being one of the first of this genre it introduced a lot of gameplay elements that would shape the genre, but when you look at it as a standalone title, there’s not all that much there.

This isn’t meant to be a knock at the game. I had a great time playing through it, but that playthrough was only a few hours.

I used an emulator to do this, so most of my level grinding was done in fast-forward, so it felt even faster to get through this title.

If you’re playing the “classics”, I’d definitely recommend this title. Playing these early games gives you more of an appreciation for the later RPGs, as well as giving you a feel for how it all started.

Have you had a chance to play this title? How do you think it holds up nowadays, especially with the release of the mobile ports? Have any DQ memories you want to share? Let me know in the comments.

Just Gave Up On - Shadowrun (Genesis)