Just Gave Up On - Shadowrun (Genesis) 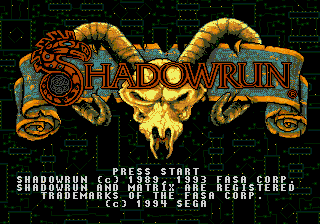 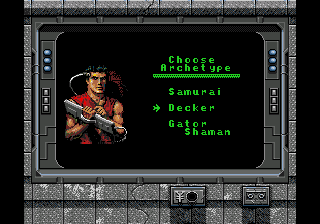 This iteration of Shadowrun doesn’t resemble the Super Nintendo’s version of this title at all.

First off, you begin by selecting the type of player you want to run the game as: Samurai, Decker or Street Shaman. Each of these classes will give you different starting abilities and stats.

I chose to run as a Decker, as I wanted to get an idea as to how the matrix sequences differed between the games (plus I’m a programmer and felt drawn to this class :P).

The story starts off with you at a hotel trying to track down some information about what happened to your brother. You interact with characters in this game through conversation trees (select A, B, C) in order to advance the story or get clues. 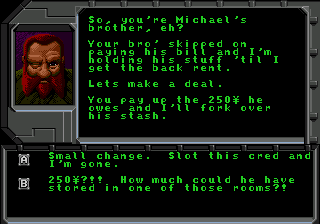 A good chunk of the game is presented through these conversation views.

Once you leave the hotel, you start on your adventure into the world of Shadowrun.

Your character can walk around the initial city and go in and out of various buildings in order to trigger additional conversations with NPCs. It’s a good idea to get a lay of the land as you’ll be visiting each of these building repeatedly once you start shadowrunning, so it’s worth taking the time to explore.

Some buildings will warn you that they contain ghouls. These buildings are where you can go to do some level grinding, or if you’re on a run that has you clearing out ghouls, earn some money. 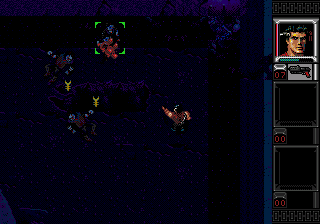 To level grind, you’ll just be earning karma points which can be applied to the various stats your character has. These stats affect your weapons skills, magic skills, tech/computer skills or your aptitude with various weapon classes.

Although I started out as a Decker, I found myself maxing out my weapon skills early on to make the game a lot easier to progress through. It turns out there really isn’t any demand for low level Deckers, so I didn’t really have an opportunity to do any Matrix runs until much later in the game.

On the subject of shadowruns, the way you earn money (nuyen) in this game is by taking on various jobs (runs) from Mr. Johnson’s. There are one or more Mr. Johnson’s in each city you visit and they offer you work. Initially the types of work are either “escort 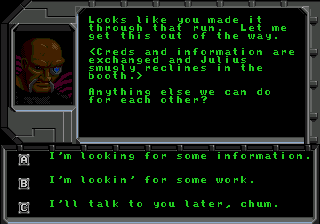 I found that the easiest runs to make money at early on where the ghoul runs. You basically just go into the building, find some ghouls and start running in circles. They’ll just follow you so you can pick them off one at a time.

Although this became tedious pretty quickly, you get money and karma and can level up your weapon stats in order to make repeating this easier.

The escort runs are easy, and if you took the time to get an idea where each target is, it’s even easier to do. It just takes time and the payout isn’t that great.

Eventually you’ll earn enough money to buy some info about where to go next and you have the opportunity to travel to a new city.

There are a handful of cities you can visit in this game, and each one offers it’s own set of challenges, as well as opportunities for more advanced runs.

You’ll also meet other shadowrunners in bars and clubs throughout the game. These runners will give you more information about shadowrunning, the story, as well as background about the Shadowrun world.

These characters can also be hired to assist you on your runs. Each one has two rates; a single run rate or a lifetime rate.

I found I didn’t really hire anyone until I hit the endgame as I didn’t really need the help. If you’re playing through the game as a shaman or samurai and don’t bother upgrading your computer skills, it may be easier to hire a good decker than to upgrade your own stats and get a cyberdeck. 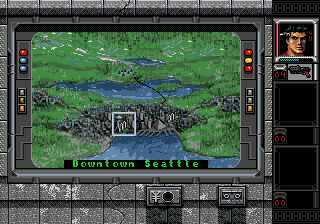 You’ll meet new Mr. Johnson’s who offer more difficult missions that involve traveling between the various cities in order to do more difficult quests such as infiltrating corporations to either steal secrets or extract employees, or running the matrix.

Both of these advanced run types offer their own challenges and require abilities to be leveled up in order to proceed.

When infiltrating corporations, you’ll need to be able to have electronics skills in order to be able to break maglocks, and you’ll want your weapon skills upgraded so as to be able to shoot guards without attracting more.

The infiltration jobs have you going through multiple floors of these buildings, with each floor having guards to deal with, security cameras to avoid and wall safes to plunder. 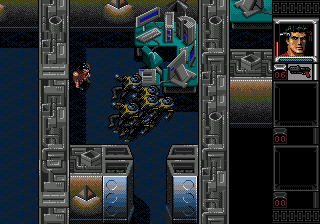 It helps to have computer skills when doing these runs as you can hack the computers to disable cameras, turn off alarms and open doors.

This takes us to decking and matrix running.

Unlike the SNES version of this game, the Genesis version actually has a bit more depth to the matrix.

The fighting itself is pretty repetitive, but the concept is fun.

There are various types of components within a matrix system. You have to hack each of these as you move deeper into the system. The end goal is usually to hit a data store and download or delete a file. 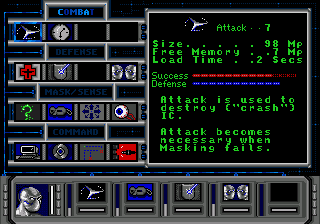 One way to easily earn money is to hack into a system, download the maximum number of data files then try to sell them to a contact in [city]. Near the end of the game i was able to get upwards of 10K for some files, which made upgrading my equipment a lot easier to do ;)

Although I’ve been a huge fan of the SNES version of this game since I was a kid, I think I may have enjoyed the Genesis incarnation more. The music wasn’t nearly as good, but the story was well laid out, there were a lot of options on how to progress and it didn’t feel nearly as linear.

The addition of the classes gave you a sense of depth and replay-ability, though chances are you could just max out all stats for any player type and have same experience no matter how you started the game.

I also really enjoyed the shadowrunning aspect of this game. In the SNES version you could hire runners to help you get through the game, but you didn’t actually participate in shadowruns for profit.

If you haven’t given this game a shot, I would highly recommend it. It turned out to be a lot of fun, and an excellent addition to the limited field of cyberpunk games out there.

If you have any recommendations for other games in this genre I should check out, or if you want to share your opinion on this or the SNES title, please feel free to leave me a comment.

Just Gave Up On - Terranigma

As someone in their thirties with a family, my personal gaming time is somewhat limited. As a result, I need to be a bit more selective with what I choose to sink any free time into; and grinding i...