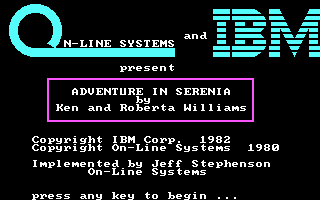 Wizard and the Princess is a graphic adventure game written for the Apple II and published in 1980 by On-Line Systems. It was the second title released in the Hi-Res Adventures series after Mystery House (On-Line Systems). While Mystery House used monochrome drawings, Wizard and the Princess added color. Ports for the Atari 8-bit family and Commodore 64 were released in 1982 and 1984 respectively. The 1982 self-booting version for IBM PC compatibles was renamed Adventure in Serenia, and is the version I played. 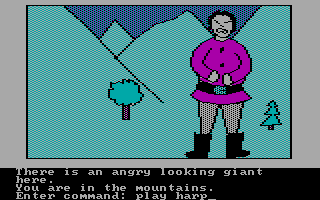 As with other ADL titles from On-Line Systems, you navigate the world by interacting with a text parser. The inputs you can provide are still pretty basic, but seeing as this is one of the first graphic adventure games from the early 80’s this can be forgiven. 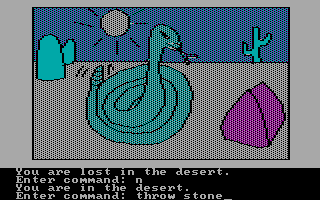 The color palette is a lot of green, brown and purple. I didn’t really think too much of this until reading through the Wikipedia entry and coming across the port notes that includes the quote “Roberta Williams reputedly referred to the colors on the IBM PC as ‘atrocious’ upon seeing the completed game running for the first time”. 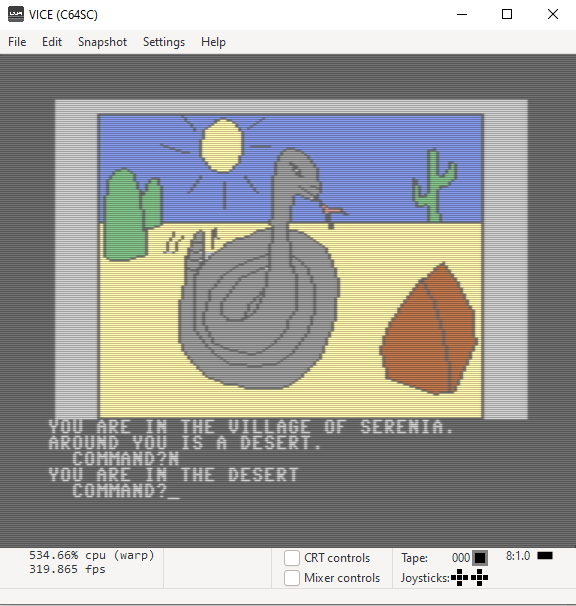 I took the above screenshot of the Commodore 64 version (running in VICE) just to compare the IBM PC version … and I can confirm the baby puke palette is an anomaly that really does make this port of the game look like shit. 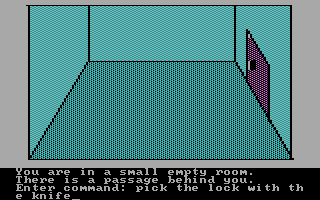 The game isn’t overly complex and can be finished in a short period of time. Some of the puzzles aren’t really intuitive, but the vast majority involve just using an item in the current room and it’ll deduce some bizarre outcome you wouldn’t have necessarily thought of (ex: USE KNIFE in the castle will pick the lock of the door so you can OPEN DOOR successfully). 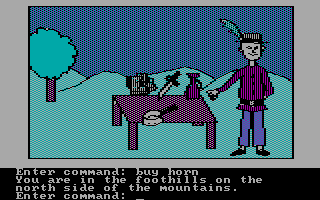 There are plenty of items to pick up along the way, and even a vendor at one point that you can use a coin you found on to buy a specific item from a table full of wares. This game really is all about picking up everything and trying out all items to see what item solves what puzzle (ex: USE VIAL to turn you into a bird … to fly one screen NORTH … you know … because of reasons).

Eventually you make your way to the room in the castle with a frog, KISS FROG, reveal the princess, go up a flight of stairs, open a chest, get a pair of shoes (which you have to LOOK SHOES first to get a magic word), then WHOOSH back to the beginning of the game. Don’t forget to TALK to the princess to trigger the endgame or else you’ll just be standing there like a dope. 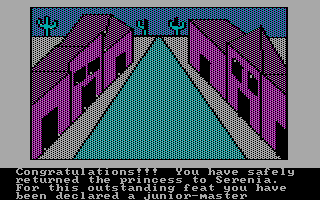 Other than Mystery House that I have extremely fond memories of due to having played it as a kid these other early Sierra (On-Line Systems) games don’t really resonate with me. As a result the iterative improvements between each title, which ultimately set the stage for King’s Quest: Quest for the Crown and beyond, were lost on me.

The Digital Antiquarian has a great write up on this game (Part 1, Part 2) that I’d highly recommend if you want to dive a little deeper into this title.