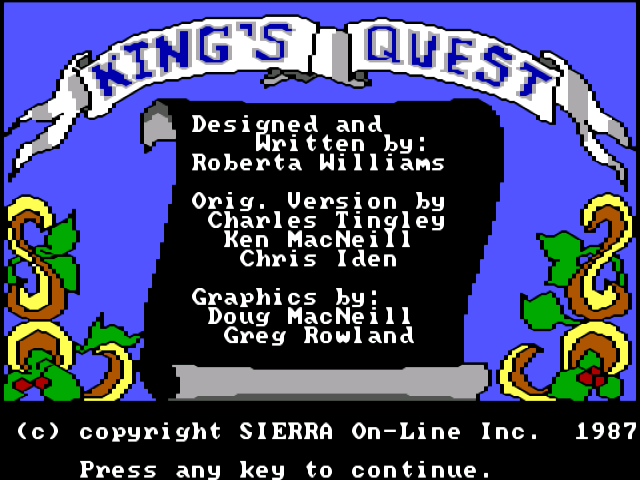 For a lot of us 80’s kids, King’s Quest is where it all began. The colours were vibrant, there was intro music and sound effects throughout the game, the story felt immersive, and oh shit, you died, time to reload …. assuming you remembered to save. 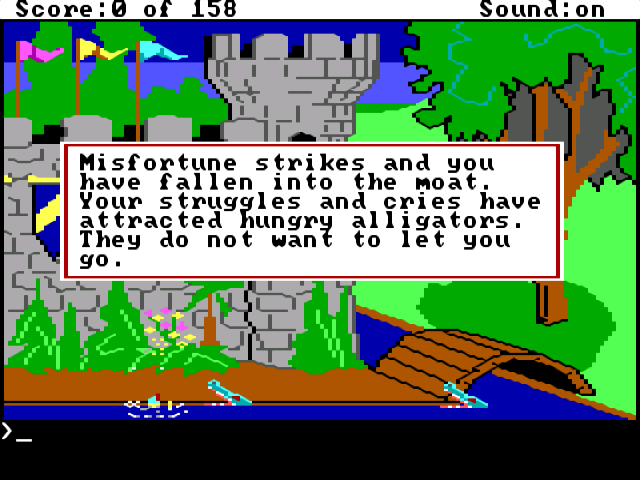 Unlike Mystery House where you’re sorta just dropped into the world and have to figure out why you’re there and muddle your way through, King’s Quest provides the player with a summary as soon as you speak to the king. Once you do, he tells you he’s dying and has chosen you as his heir, but first you have to prove yourself by going out and finding three things that he wants you to bring back.

Moving about the world is done using the arrow keys, and the game engine actually allows you to move in four directions as well as creating a sense of immersion by allowing you to walk behind things. This was a huge leap forward compared to the text parser mechanism previously used to navigate game worlds as instead of typing GO EAST and a new wall of text describing the interaction, you just … move yourself east to the edge of the screen and a new screen renders as a result.

Interacting with the world is still done using a text parser, however this time it’s much more sophisticated and can parse multi word phrases and can understand certain word variations, making for a less frustrating experience. 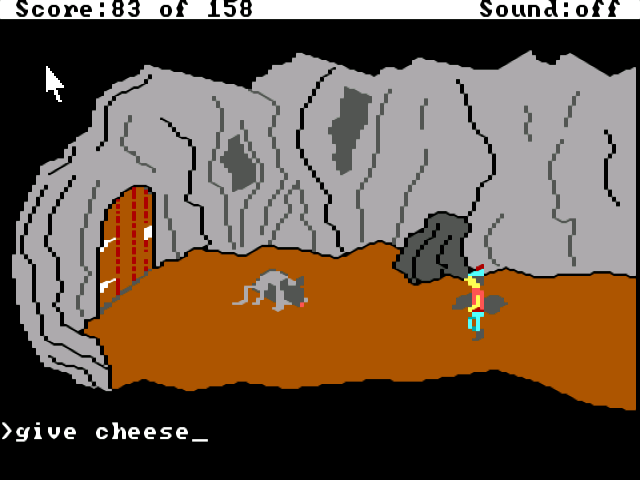 Let’s not kid ourselves though, this game can still be extremely frustrating. Basically everything can (and will) kill you if you get too close to it, there are certain screens with random encounters (ogres, wizards, the with) that will end your game and if you fall in the water and forget to type swim … you drown.

The puzzles are generally intuitive, and progressing through through the game isn’t overly difficult. For example, when you meet a couple in their cabin and see there’s a fiddle in the corner, you assume you’re going to need this item and can either take it or have to do something for the couple for them to give it to you. If you try to take it, the game says something like “you can’t take their only possession!”, then if you talk to them they say they can’t offer you anything as they have no food.

While walking about, you find a random bowl on the ground with the words “FILL” in it. Typing fill once you’ve picked it up will fill the bowl with food magically. I wonder what you’re supposed to do with this … Oh right :P

There are some frustrating puzzles as well, like the quest for the magic beans. Since King’s Quest loosely follows a fairy tale story line and integrates a number of tropes, you’re supposed to know things like “goats don’t like trolls” to be able to cross a bridge. Once you puzzle that out, you get to an old man who will give you the beans if you can guess his name. A clue in the game tells you “it helps to think backwards”, and if you know the Rumpelstiltskin story you know you just need to say his name backwards … but Sierra decided to make this even more complicated by instead making you reverse the letter characters of “Rumpelstiltskin” instead of just typing it in backwards. Oh yeah … I needed a walkthrough for that …

You finally find the three treasures, kill a dragon and a giant, DJ a Leprechaun dance party and bring all that shit back to the king and … he dies … but not before crowning you king of Daventry and setting you up for a 7 game franchise (yeah I know it’s 8 … but we don’t speak of Mask of Eternity).

Overall this game is still very accessible and playable, even as a text parser game. There was an SCI Remake in 1990 which updated the graphics, but the text parser interface remained (check out the demo trailer for the SCI remake!). For anyone interested in early adventure games, this one should be high on their list and as it can be played in ScummVM you can play it on any system you happen to be reading this on. 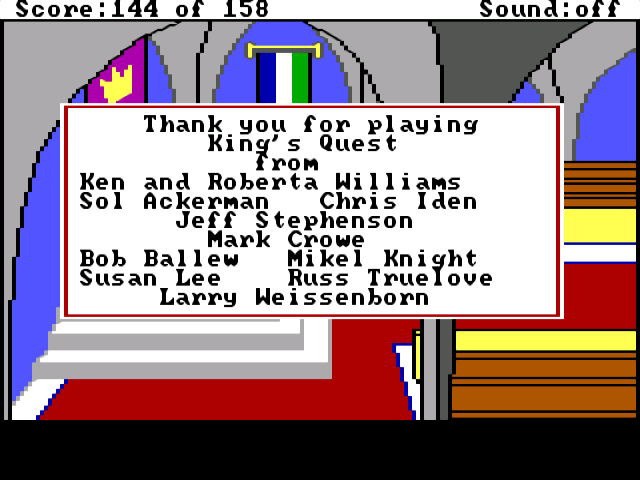 This review is part of the “Let’s Adventure!” series. See all reviewed games sorted by rating here. Though I’m pretty sure I played King’s Quest first, Space Quest is the game that really stands o...