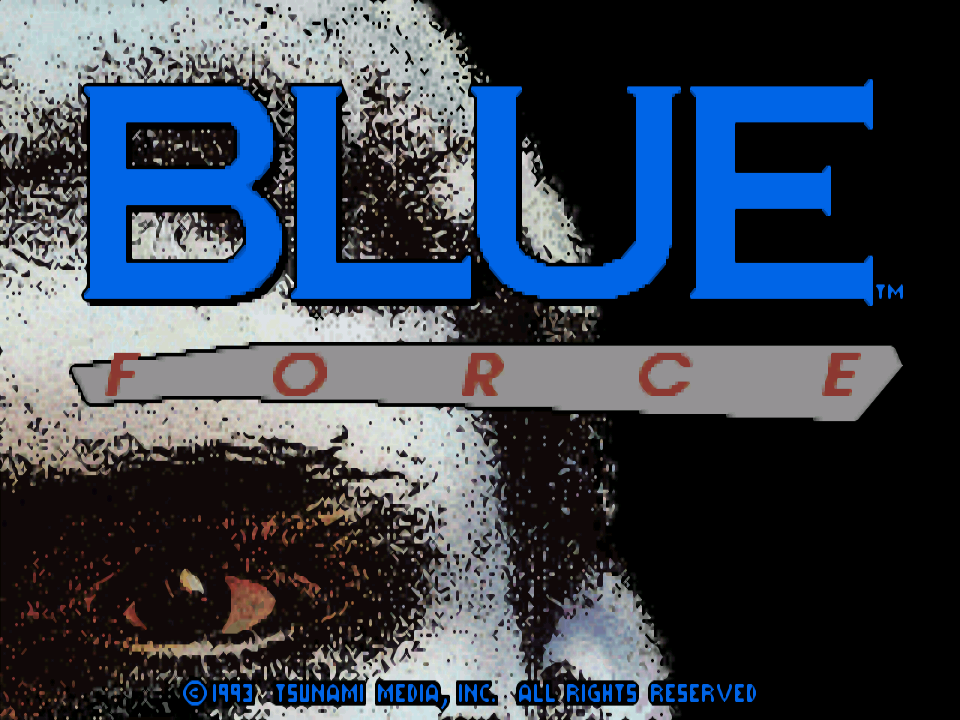 Since I just finished playing Police Quest 1 I figured I’ll stick with the “police work simulator” category and pick up Blue Force next.

Blue Force was also designed by Police Quest designer Jim Walls so there are some thematic similarities between the titles. You have to use proper radio codes while on your bike when calling things in, and if you don’t call for backup appropriately you’ll likely get yourself killed. 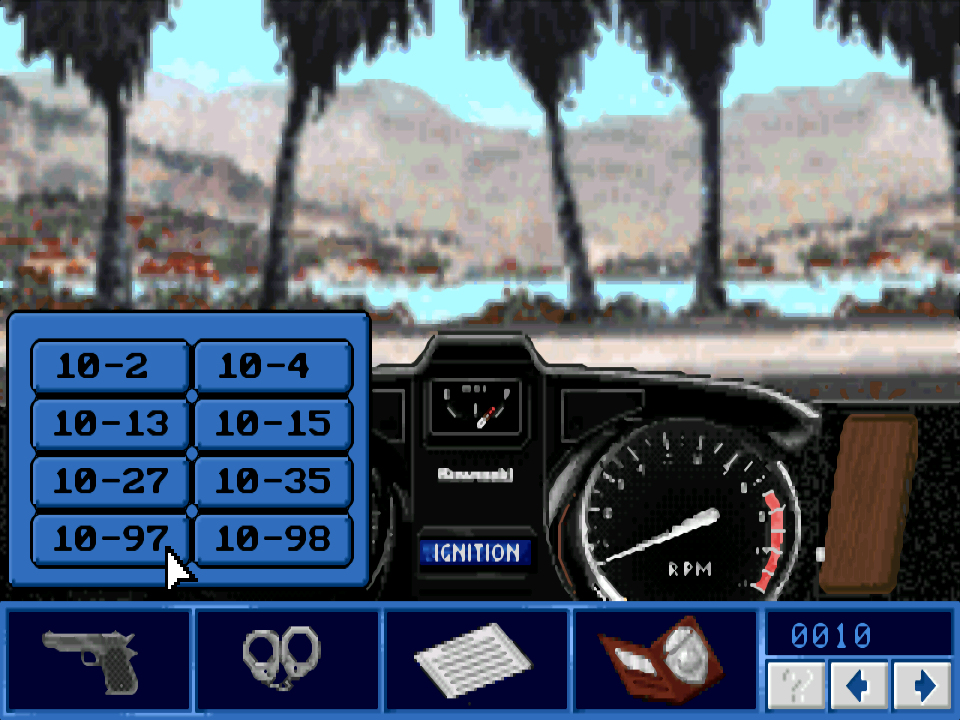 The story follows Jake Ryan, a rookie officer who’s parents were killed when he was a child and the murderer never caught. The game sees you investigating a number of incidents that seem to surround a national guard armory break in. These result in evidence surfacing that ties into Jake’s parents murder and the murderer being involved in the gun smuggling ring. 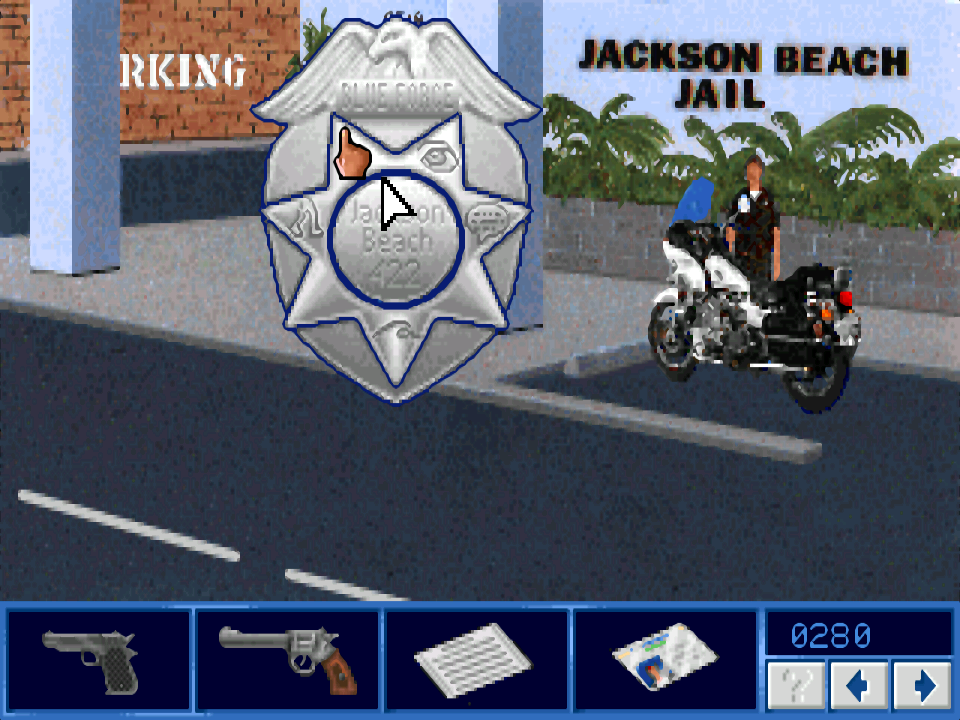 A point-and-click interface is used to interact with the game world. Common actions such as Move, Interact, Inspect and Speak are present as icons in a circular menu that is raised when you right click. I’m not sure if Tsunami was the first adventure game company to adopt this style, but it does appear in other company’s games later on (such as Full Throttle from LucasArts). 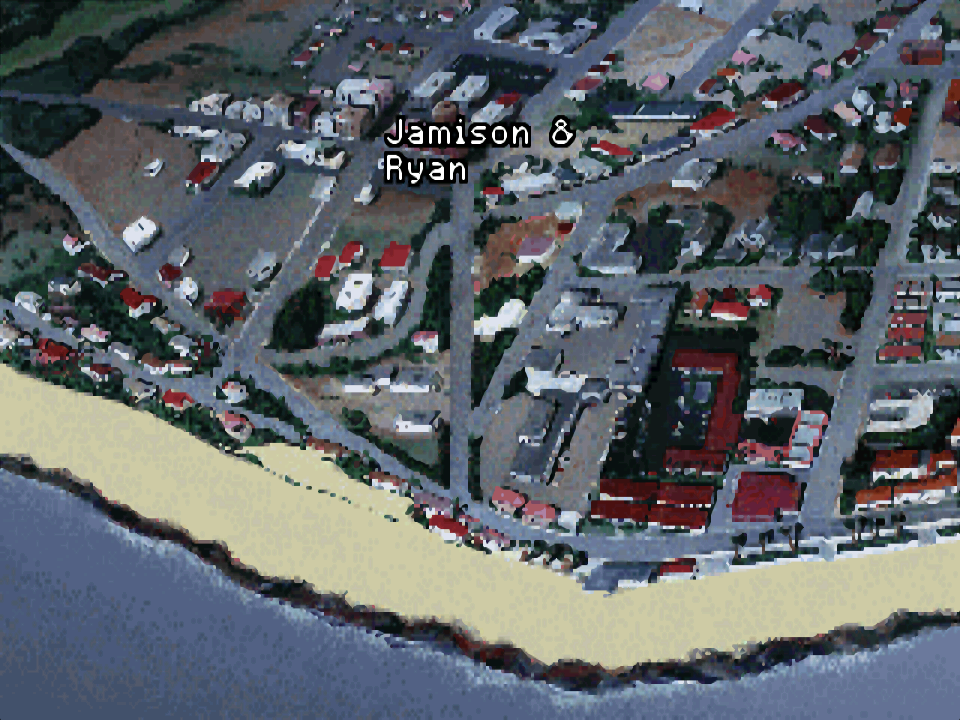 Navigating between locations is done by getting on your motorcycle and selecting a location from the game map. As you move the cursor about and hover over locations a tool tip will occasionally indicate this is somewhere you can travel. Other than the Marina which is easy to identify, figuring out where you need to go can be frustrating and unintuitive. I actually took the screenshot above as I kept forgetting where Jamison & Ryan was and found myself blindly moving the mouse around trying to find it each time … 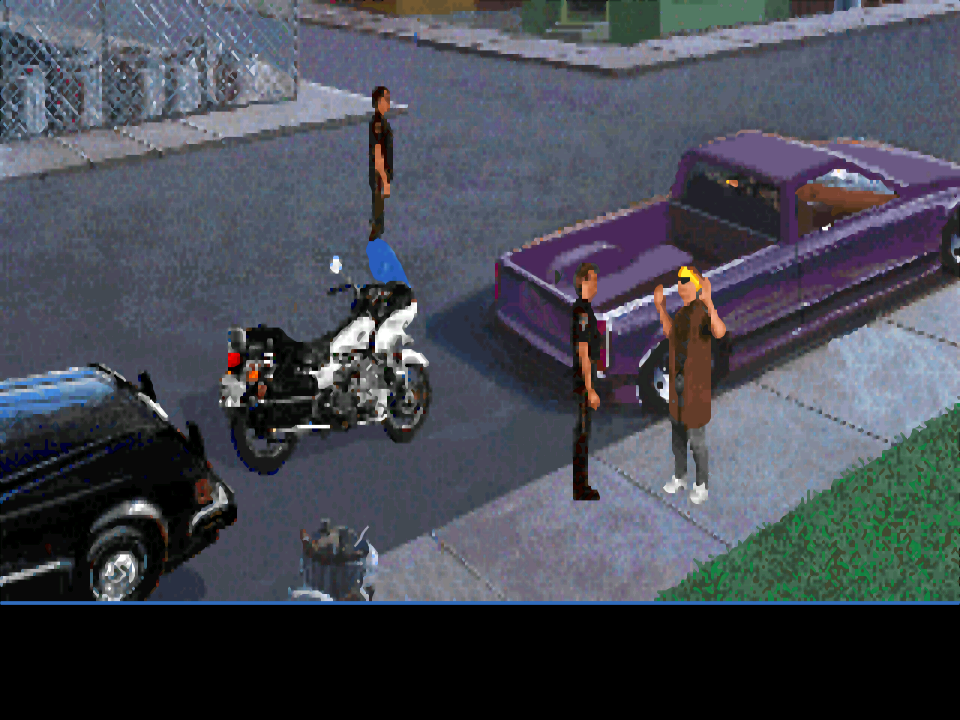 The story progresses through various traffic stops and scripted events that your dispatcher sends you to. Proper police protocol needs to be followed when making an arrest or detaining a suspect, however this is extremely repetitive (talk, talk, talk, cuff, search). Luckily this isn’t a very long game so you only have to do this …. like 8 times. 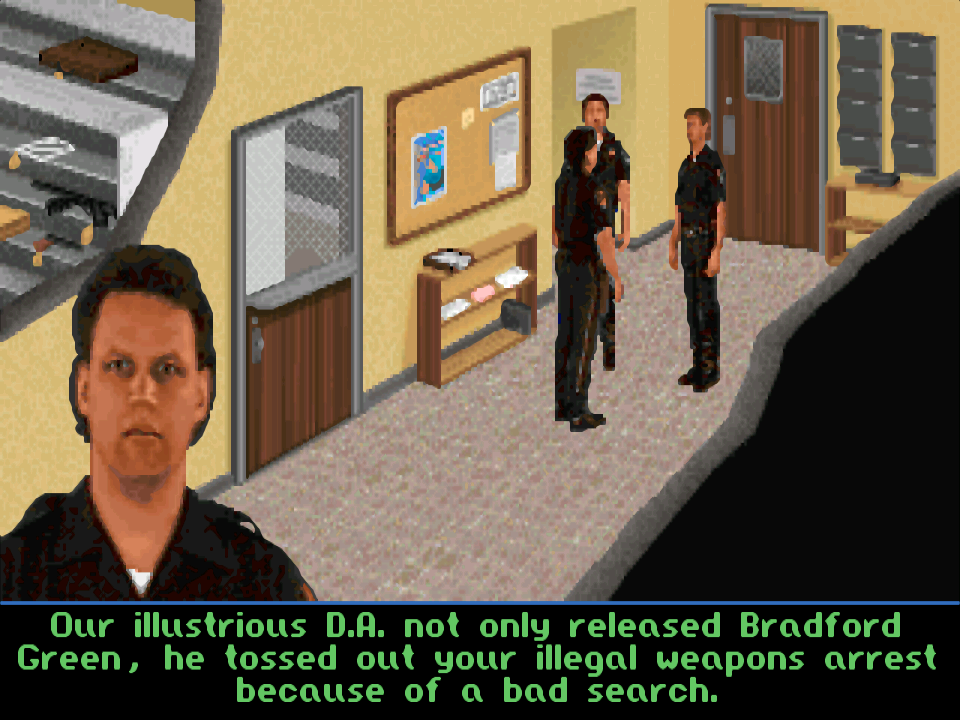 Interacting with other characters overlays their floating heads without a border or frame above the text area, which is actually a lot nicer than Sierra’s approach. The character designs are fairly detailed and the story advances quickly through these interactions. 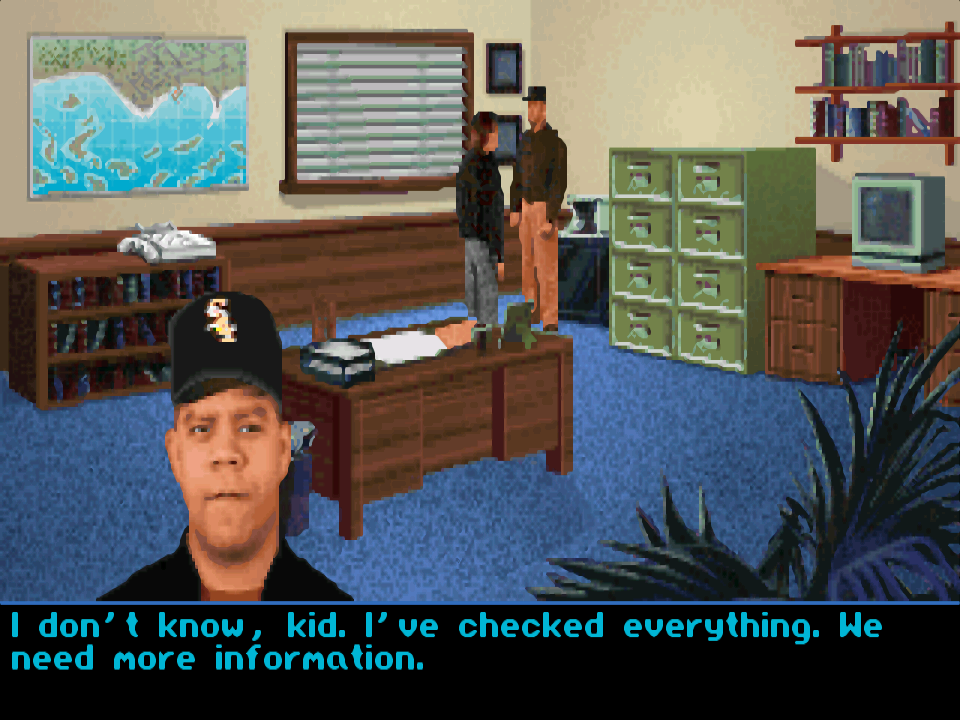 Your dad’s old partner, who’s been in your life since your parents murder is still running a PI firm. As you surface new evidence that ties into your parents murderer you being to work with him more to try and track down the gun smugglers. 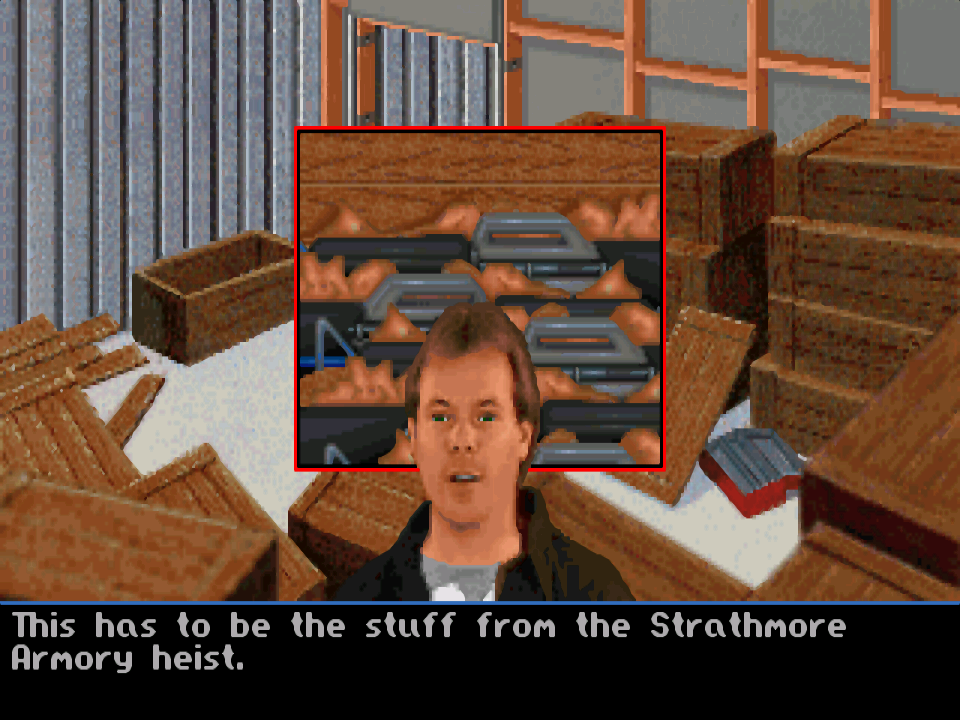 These investigations eventually lead to a stash of stolen automatic weapons, which you alert the ATF about. As you suspected, one of the main gun runners is the same guy that killed your parents, and the game ends with you finally bringing him to justice.

Overall the story is pretty tight and interesting, and the game progresses smoothly. The plot guides you appropriately to the handful of locations on the map you need to explore, but since this is an adventure game there are no shortage of puzzles …. frustrating puzzles. 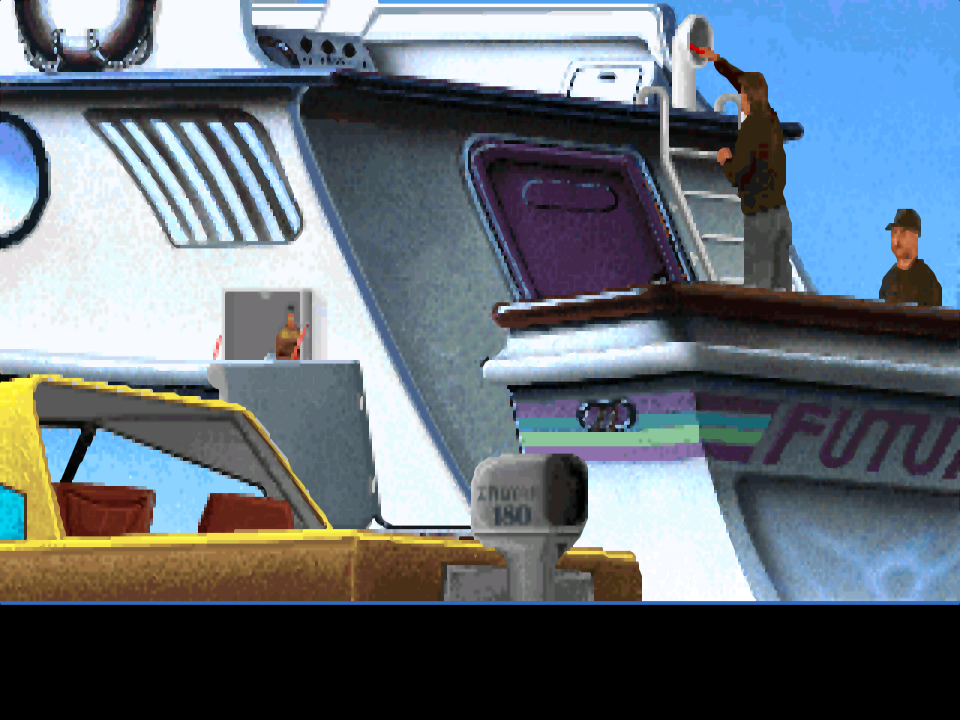 Need to get a perp out of their locked house boat? Stick a rag, diesel fuel and a flare in the air intake to smoke him out. Want to investigate a locked houseboat? Bring a rare coin from your house to the boat rental shop and give it to the man there so he goes to the back room to get a price guide, which gives you an opportunity to steal the keys…

Having played adventure games my whole life these types of puzzles aren’t uncommon or unexpected, but it never hurts to have a walkthrough handy just in case ;) 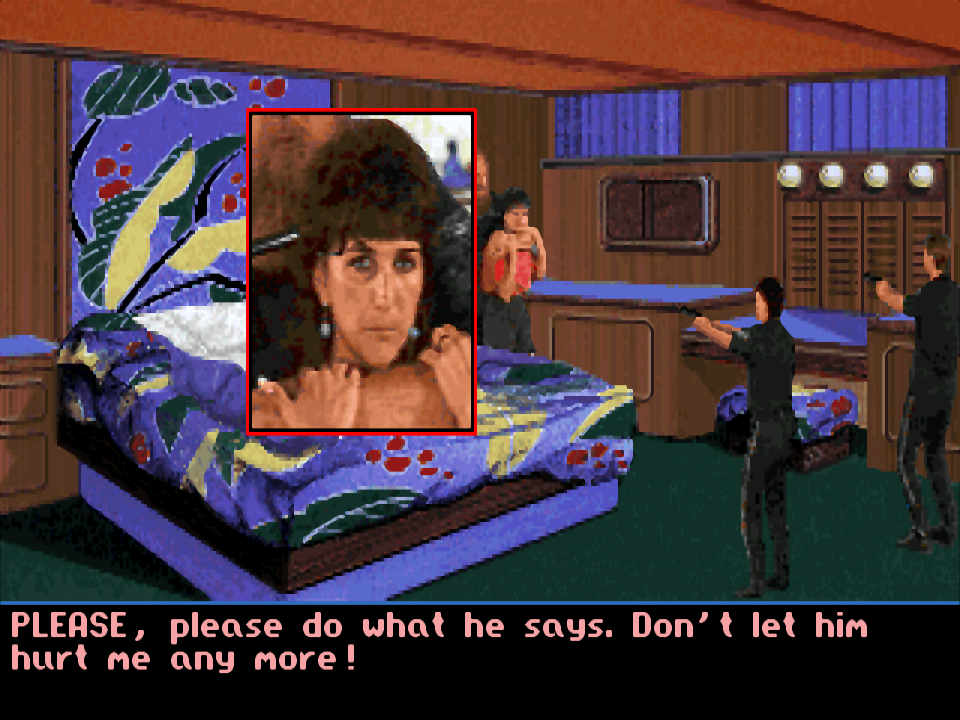 The graphics are pretty good for this time period. Character portraits are well done, and your character on screen is generally large enough to appear smoothly animated and expressive. The background music and sound effects are a bit repetitive though, and can get annoying at times. 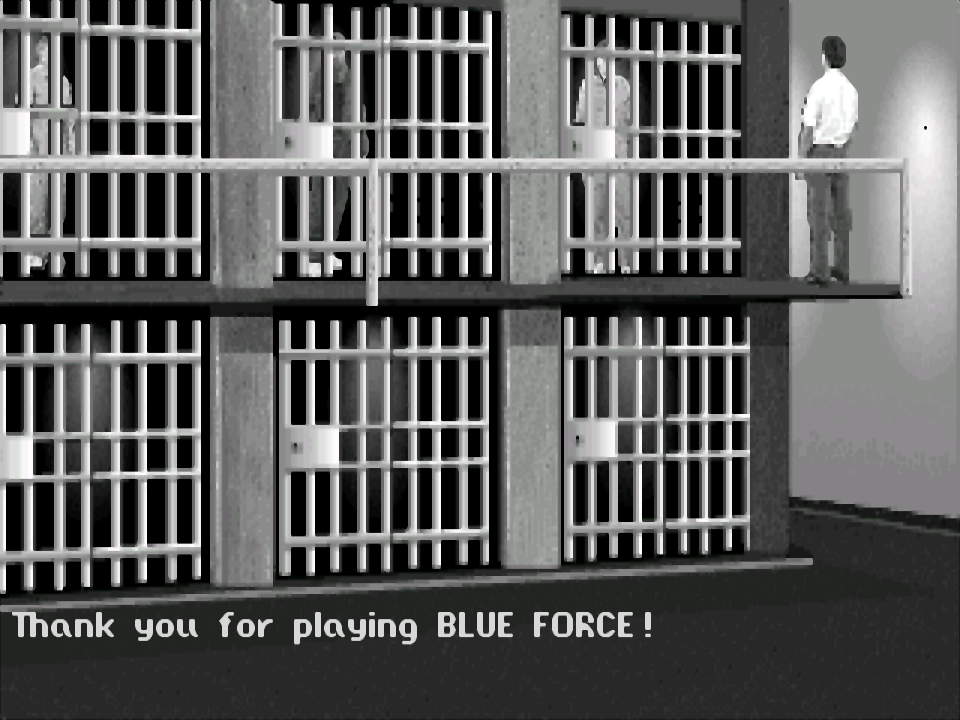 Blue Force came out at the height of Sierra Online’s dominance of the adventure game market, and Sierra’s influence on this game’s design can definitely be seen. Though the game is fairly linear, I enjoyed the story and the overall game play experience.

I’m looking forward to playing other Tsunami games as this series progresses.