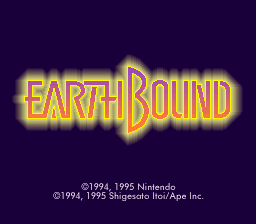 When I was really getting into 16-bit JRPGs in the early to mid 90’s, Earthbound was actually one of the first games I ended up owning. Strangely enough what I remember most about it was the oversized box I couldn’t bring myself to get rid of, but couldn’t seem to find a place to put either.

EarthBound takes place in the 1990s, several years after the events of Mother, in the fictional country of Eagleland (a parody of the United States). The player starts as a young boy named Ness as he investigates a nearby meteorite crash with his neighbor, Pokey to find his neighbor’s brother Picky. They find that an alien force, Giygas, has enveloped and consumed the world in hatred and consequently turned animals, humans, and objects into malicious creatures. A small, bee-like creature from the future named Buzz-Buzz instructs Ness to collect melodies in a Sound Stone from eight Sanctuaries to preemptively stop the force, but is killed shortly thereafter when Pokey and Picky’s mother mistakes him for a pest. On his journey to visit the sanctuaries, Ness visits the cultists of Happy Happy Village, where he saves Paula, and the zombie-infested Threed, where the two of them fall prey to a trap. After Paula telepathically instructs Jeff in a Winters boarding school to rescue them, they continue to Saturn Valley, a village filled with a species of creatures called Mr. Saturn, the city of Fourside, and the seaside resort Summers. Meanwhile, Poo, the prince of Dalaam, undergoes training called “Mu Training” before joining the party as well.

Like most (J)RPGs of the time, interaction with the game world is mostly menu driven. When you want to interact with a character, object or use an item you have to bring up a menu and select the appropriate entry. You can access the talk/search option quickly by pressing a different button on your controller, but it’s still just picking a menu entry for you.

As you explore the world you’ll see enemies on screen that will rush at you and trigger an encounter. These battles are also menu driver, however unlike most games at the time the backgrounds aren’t static images. “Funky” patterns are pulsating moving around all the time, enhancing the experience. I don’t think I’ve actually seen this type of battle presentation since Earthbound, and though it seemed weird at first it actually really suited this game.

Battling enemies gives you experience, which allows you to level up. As you gain levels and your characters get stronger you’ll eventually be “too strong” for the enemies in a particular area of the game. When this happens, instead of running towards you, the enemies will run away from you. If you engage them in battle, instead of fighting you’ll just get an instant victory - including the EXP you would have gained by winning a battle.

There is an element of strategy as to how you approach an enemy on the overworld. For example, if you surprise an enemy (from behind), the encounter will being with a “green swirl” which gives you the first move as an advantage. If the enemy surprises you however, a “red swirl” will be shown and the enemy will go first in the ensuing battle. 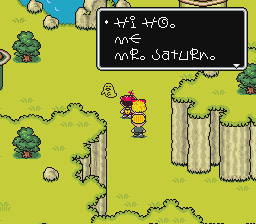 You’ll encounter a large cast of characters as you explore the game world, and each will help progress the story forward. You’ll team up with three other characters throughout the game - each of which is proficient with a different skill.

Jeff uses items and can fix various broken items you find to turn them into something useful (such as a weapon for himself). Paula has strong offensive magic, and Poo is a good fighter with a mix of offensive and defensive magic.

As you explore you’ll find presents all over the place that contain items, weapons and armour. Inventory management is a bit of a pain in the ass in this game as each character has a limited number of inventory slots and once they’re used up you have to choose to drop and item every time a new one is found. There is a service you can call to store and retrieve your items (Escargo Express), however you need to have access to a phone booth for this.

The story seems a little simplistic at the beginning, but as you progress it draws you in an keeps you engaged. I’ve replayed this game multiple times over the years and still find myself reading through the dialogue on each replay as the writing is very clever. The characters are all interesting and for a game you’d think was designed for younger kids it’s actually pretty “deep”.

Ultimately your next door neighbour ends up being evil and aligns himself with the ultimate evil force, Giygas. You need to travel into your mind, through time and eventually transport your soul into a machine to go fight Pokey, then finally Giygas. Interestingly enough, the final battle isn’t all about wailing on the baddie, but requires to you do a little thinking (and a little praying).

If you’ve never played Earthbound (aka. Mother 2) and are a fan of JRPGs from “golden age”, this is definitely one to try!