Nightshade, fully titled Nightshade Part 1: The Claws of Sutekh onscreen, is an action-adventure video game released in 1992 for the Nintendo Entertainment System. It was developed by Beam Software and published by Ultra Games. The game was meant to be the first part in a series, but no sequels were ever made; however, it served as the basis for Beam Software’s Super NES video game adaptation of Shadowrun. Though it’s not covered in this series, I’ve reviewed Shadowrun previously.

Your goal in Nightshade is to become a hero. You start off in the sewers under Metro City having been captured by Sutekh, who has taken over the city’s various crime factions and merged them all into one (under his control). You find yourself tied to a chair in the sewer with a bomb about the go off. Sutekh monologues for a moment then leaves, leaving you to try and escape.

Once you do you go about your adventure, which involves collecting items and fighting off some baddies.

As you perform good deeds (such as saving citizens) or beating up bosses, your popularity will grow. Other than opening up new dialog options with certain NPCs I don’t know that this really has a huge impact on how you progress through the game.

Enemy encounters give you direct control over Nightshade, allowing you to punch, kick and jump. Since you have limited health and no way to heal during a battle, if you get knocked around too quickly you’ll likely die .. so save often! The battles are actually pretty challenging and I found playing this game using an emulator made it a much less frustrating experience.

Speaking of dying, I actually found the system they use in this game to continue after dying to be pretty innovative. You essentially have 3 “continues”, but in order to use them Nightshade needs to escape from a death trap that Sutekh has placed him in. These are overly elaborate and cartoony (like something out of the original Batman TV Series). After escaping the death trap you’re back in the sewers where the game started, but seeing as the game world is extremely small it doesn’t take too long to get back to where you were.

The previous hero of Metro City was Vortex, who’s lair you’ll eventually find. There you can use a healing pod to recover your health a fixed number of times to help get you through the game. Since you don’t heal after a fight automatically you’ll find yourself going back to the lair often as you progress through the game.

Be a hero they said! What’s the worst that could happen …

If you’re wondering why Vortex doesn’t just kick Sutekh’s ass himself, well, once you go looking for the Rat King (one of the 5 crime bosses) you’ll find out.

Each crime boss holds a scarab, which you’ll need to collect in order to open the path to the final encounter with Sutekh. I remember playing this on the original console back in the day and finding these boss battles extremely frustrating and difficult. I mean … REALLY difficult. Even playing today with an emulator and quick saves I found myself dying a lot. 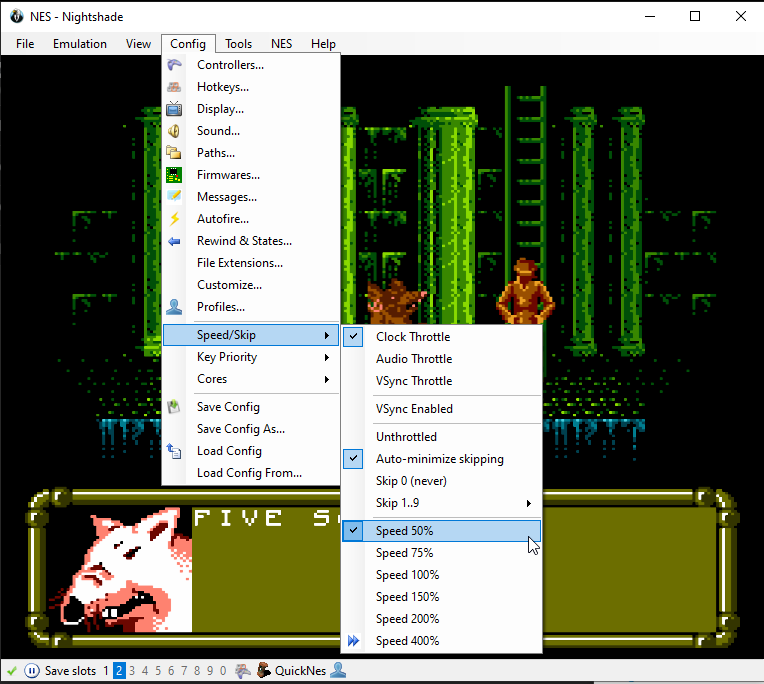 To get through some of these fights I found myself turning the emulation speed down to 50%. This gave me enough time to react to the enemies moves and setup an attack before getting my ass handed to me. Maybe I’m just getting old and my reaction time sucks now, but I had to resort to this more than once throughout this play through …

Navigating the world is pretty straightforward, though interacting with it requires dropping down to a menu system from which you choose your options (Pick Up, Operate, Jump, Talk … etc). This can be pretty cumbersome, but seeing as it’s an NES game there really weren’t a lot of options for mapping these interactions to buttons.

After collecting all 5 scarabs, you go to the graveyard and use that cumbersome menu system to select each scarab and put it into a slot in the statue. This opens up a door that leads you to a rematch with each of the 5 crime bosses. This really feels like busywork at this point, but after fighting them all again you find Sutekh, beat him and save Metro City.

And that’s all she wrote … until next time!

I’m likely going to score this game a little higher than it may deserve because I have a bit of a history with it. Back in 2005 I stumbled across Tool-assisted speed running and the TASVideos community. Back in those days I went by the handle Maximus, and one of my first published videos was “NES Nightshade by Maximus in 08:27.67”. Fun fact, a much younger me also wrote the original TAS Movie Editor, but this functionality was subsumed into Bizhawk eventually making the solution unnecessary.