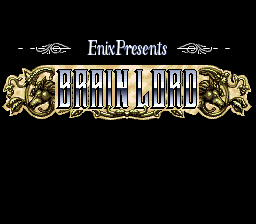 Brain Lord is an action RPG from 1994 for the Super Nintendo published by Enix. The story follows Remeer (you), who’s father being the last of the dragon warriors was sent on a quest to find the last of the dragons terrorizing the village. Your father never returned from this quest and the game opens with you starting out on your own journey to find your father. 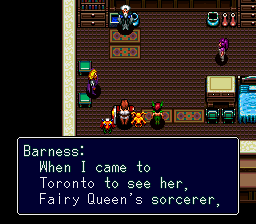 Remeer is joined by his four friends: Kashian (a bounty hunter), Barness (a spiritual guru), Rein (a warrior), and Ferris (a witch). These characters help advance the plot, which is pretty standard JRPG fare (dragons, towers, save the world) and provide hints and clues along the way.

Fun fact, Remeer (or its equivalent ‘Lemele’) appears in two more video games developed by Produce! and published by Enix, The 7th Saga and Mystic Ark. Double fun fact, I’ve been trying to beat both of those for years now and may eventually write them up in a “Just Gave Up On” entry …

The game is broken down into 2 cities (Arcs, Toronto) and 5 dungeons (The Tower of Light, Ancient Ruins, the Ice Castle, Droog Volcano, and Platinum). 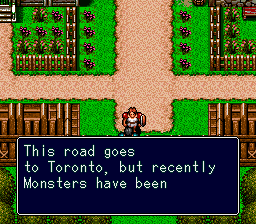 Cities contain NPCs that nudge you in the right direction to keep the story progressing, as well as provide shops for equipment and items. Both cities have an inn you can recover at and save your progress. 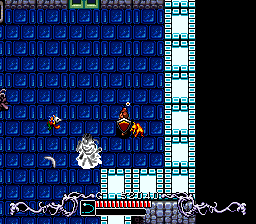 Once you’re out of the city you’re either on your way to a dungeon, or in a dungeon. These areas are filled with monsters that you engage with in an Action-RPG direct combat fashion. You have a number of weapons you’ll collect over the course of the game; the ranged weapons weaker (boomerang, bow) and the melee weapons stronger (swords, axes, morning stars). 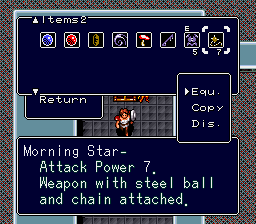 Weapons, armor and items can be found in treasure chests in the dungeons and are stored in your inventory. You have 3 inventory pages, after which you’ll have to either sell or drop items to make room for more.

Aside from moving about the various floors of the dungeons and fighting random enemies, you’ll also have to solve puzzles. These puzzles all seem to come in the form of “press these switches either in a certain order, or all at once with rocks or balls”. 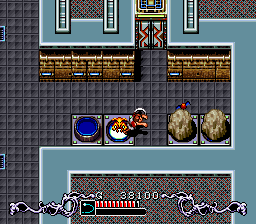 When you’re not fighting or pushing rocks, you’re probably crossing chasms by jumping. Jumping puzzles suck in RPGs. I don’t really have anything to add to this other than complaints … and a deep appreciation for having played this game on an emulator with save states … 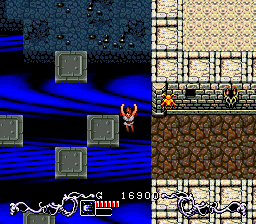 You’re going to fall …. a lot. When you do you’re returned to the start of the room and you lose one life unit. If you were trying to solve a puzzle, leaving the room and returning will reset everything so you can try again, but falling right before you were about to solve a time consuming (usually tedious) puzzle is a pain in the ass. 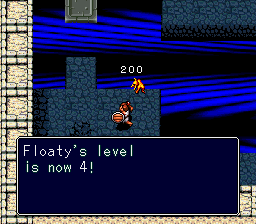 You can collect heart containers to increase your health, but you don’t level up while fighting. You do gain money and occasionally monsters drop orbs. These orbs can be collected by your Jade’s to level them up and make them stronger.

These Jades are either bought in town or found in dungeons and provide various skills such as lighting dark rooms, healing you or attacking enemies. You can only equip two at a time, but I found I generally just kept two attack Jades at all times (unless fast forwarding the emulator with a healing Jade). 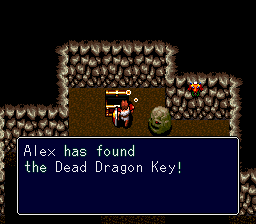 The dungeons are made up of multiple floors with many, many locked doors. You collect keys throughout to unlock these and progress higher (or lower).

Navigating the dungeons can be difficult, but you do get an item early on that can be used to show a minimap. 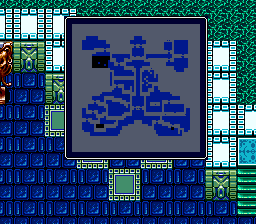 Honestly I’d have been pretty lost without this as you forget where you are pretty quickly as you go, especially in the later dungeons. This would have been a great thing to be able to bind to one of the unused controller keys so you don’t have to open the inventory and select it each time, but seeing as this is an earlier RPG I’ll cut it some slack.

Once you reach the end there is a boss that needs killing, which generally isn’t too difficult. These bosses are much larger and generally are multi phase battles. 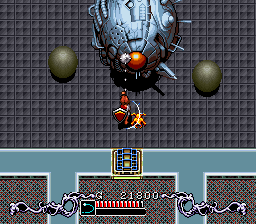 You make your way through the dungeons, kill the bosses, kill the Goblin king and you get a very basic ending screen for all your efforts. 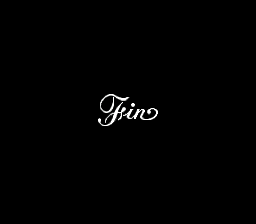 Overall the game is enjoyable and the puzzles can be interesting at first. Unfortunately there aren’t too many ways to spice up the “push rock, depress button” recipe so after a while this starts to get repetitive.

The later dungeons include a lot of back tracking, and the dark room puzzles where you can’t use your light Jade and have to just “trial and error” your path through an invisible maze is frustrating.

I did enjoy the journey and found the game to be pretty good for a lesser known SNES JRPG. I guess I shouldn’t be surprised that the precursor to 7th Saga would be frustrating to play :P