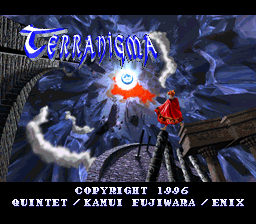 This has been a long time coming. I took a run at Terranigma in 2015 and failed miserably, but I was such a huge fan of the other Quintet titles for the SNES I just couldn’t leave this unfinished.

The game tells the story of the Earth’s resurrection by the hands of a boy named Ark, and its progress from the evolution of life to the present day.

It was published by Enix in Japan before Nintendo localized the game and released English, German, French and Spanish versions in Europe and Australia. The game has never been officially released in North America.

Terranigma starts off with the protagonist Ark meeting a friendly demon named Yomi by opening Pandora’s Box, causing the citizens of the world to freeze. To unfreeze people he needs to resurrect the world. To do this he needs to travel through 5 “chapters” that see him resurrecting everything from plants, animals, people and even the wind. 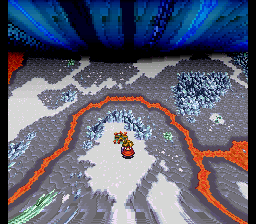 Mode 7 is used extensively in the overworld to great effect, which is not surprising for a game made this late in the SNES’ existence. This effect greets you as soon as you exit the first town and head for one of the 5 towers you need to beat in order to restore the continents. 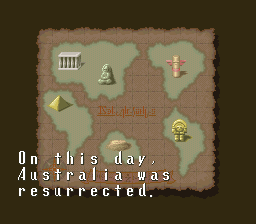 Once completed you have to jump into a chasm that spits you out on the “light side”, where you progress across the world (in a very linear fashion) clearing monster infested areas to keep reviving parts of the world. To progress past an “area” of the game you have to fight a screen-filling monster who typically has a fixed attack pattern and isn’t all that hard to beat. 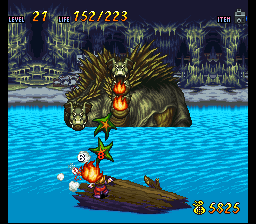 This brings us back to why I quit on this game in the first place. In my last playthrough I made it as far as Bloody Mary (or as one writer aptly put it: Bloody Fucking Mary) and was so under-levelled there was nothing but an ass kicking waiting for me every time I tried to take her on. 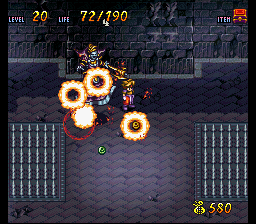 The difficulty of this game doesn’t increase all that much as you progress through the first half, and as long as you buy the best weapons and armour you can find there’s little challenge. Bloody Mary ratcheted this up to 11 by requiring a minimum of level 25 to stand a chance. Playing this game “normally” up to this point would have you at level 18 at best, and grinding is a huge time sink.

I was able to beat Bloody Mary (very under-levelled) by using save states and a lot of patience, but if playing on a console the challenge may prove impossible to overcome. 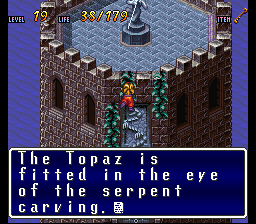 As you advance through the game the beautiful graphics and soundtrack greet you at every turn. Eventually you make your way to the point where the world has been resurrected and you’ve dealt with all the “lightside / darkside plot twists” that may have been surprising at first but end up being over played when repeated too often … 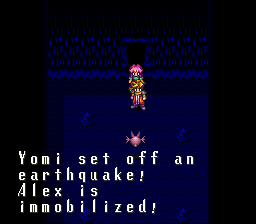 Being a 16-bit era JRPG the game is full of fetch quests and overly complicated puzzles. When the time comes to go on the Starstone fetch quest for example, one puzzle requires you to buy an extra flower from a girl in one city to give to a random penguin in Antarctica based on an extremely cryptic clue. Sure, if you’re paying attention you might remember this when the time comes … but it’s highly unlikely. 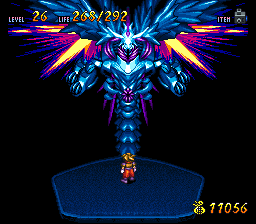 Eventually you make your way to the end, fight Dark Gaia’s 2 forms and win. This again is an area that very much requires you to grind up to level 35 to deal with properly. I … didn’t make it that far so again resorted to save states and patience. Honestly some of these fights were tedious and repetitive, but to make them easier you need to grind a lot … which itself is tedious and repetitive.

This was par for the course with 90’s JRPGs so I can’t really fault the developers for these tropes, but going back and playing these games now I would rather invest my time enjoying the experience instead of blindly killing enemies over and over.

Overall I thoroughly enjoyed this game and found the story to be extremely well told. For anyone that enjoys these old games and grew up in North America, this is one you’ve likely never played and will not want to miss!